When you speak with Adrienne Cheatham (Culinary, ’07), you can hear the tenacity in her voice. As a former sous chef at Le Bernardin and executive chef at Red Rooster, and the subject of a recent NY Times Taste Makers video, Adrienne is mindful of the accomplishments behind her. She’s more concerned, however, with the missions that lie ahead — like leaving her comfort zone (if working 16-hour days seven days a week can be called a “comfort zone”) and branching out on her own.

Adrienne balances her time in the kitchen with an activity that calls upon a completely different skill and mindset: dance. While scoping out locales for a potential forthcoming project, Adrienne took a pause to chat with me for the ICE blog.

First, congratulations on the Taste Makers piece. What was it like working on that?

They were trying to steer the focus of it to the challenges that a woman faces in the kitchen, and I didn’t support that idea. I didn’t want to be a part of that kind of story. I think that kitchens are the great equalizers — either you can do the job or you can’t. It doesn’t matter if you’re short, tall, your gender, your race, none of that matters in a kitchen. That’s why I was glad they took the focus off of that. 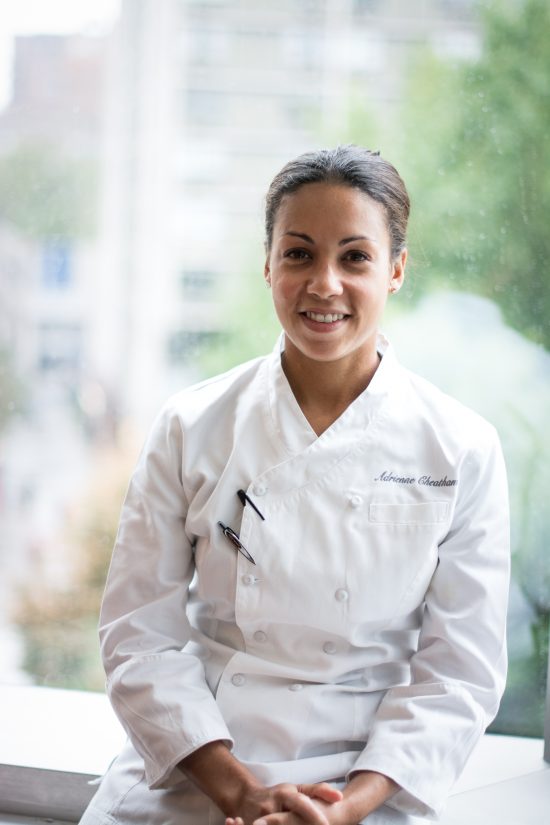 Is it a relevant question anymore: what’s it like to be a woman in a kitchen? Or is that a cliché at this point?

In some ways, it’s cliché because it’s asked so much. At least now people are aware of women in kitchens. And yes, women are still the minority, but you experience the same things that the guys do. Maybe you feel differently about a crass or vulgar joke but that offends some men too. It’s not as much of a gender issue as before when it was novel to see women in the kitchen.

Don’t get me wrong — I’ve been the only woman in the kitchen for three to six months at a time. I’ve also been the only black person. But anyone can be the minority. You could be the only blond in the kitchen, but it’s not an issue because everyone’s there to work. It’s a complete meritocracy. You’re judged by whether you did a good job at your station.

When did you realize you wanted to work in restaurants?

So I went to college in Florida. I started majoring in business and finance, and then I switched to journalism and PR during my junior year. Business and finance were cool — those were principles I needed to learn. My mom was pushing me to get a job in finance. She told me to make a lot of money and then cook as a hobby. But I still wanted to go to culinary school, and if I wanted something to fall back on in the same industry, I figured that journalism would be the best option.

Do you do any writing nowadays?

I did the recipe testing and editing of the "Avec Eric" cookbook with Eric Ripert. Recently, I helped write and test the recipes for "The Red Rooster Cookbook" by Marcus Samuelsson. I also did the book's food styling, working with the prop stylist and photographer.

It was something I had planned already. I was working for a pastry chef at a resort in Florida, and I thought I wanted to go into pastry. The chef and the sous chef knew I wanted to go to culinary school and they were very supportive. They believed that even if you have been working for a few years, it’s good to back up your credibility with a culinary school education.

I figured because I’d worked in pastry for a few years, if I go to culinary school, I’d go to the general program to learn new skills. I thought I’d go back to pastry, but the culinary arts program offered such a different mindset, I ended up liking the freedom and creativity on the savory side.

Is that how you ended up working at Le Bernardin?

I got referred there through a classmate. I’m originally from Chicago and I wanted to do my externship there, so I was holding out for Charlie Trotter’s. I thought, in case it doesn’t work out, I should look for something in New York.

One of my classmates was doing her externship at Le Bernardin. She gave me the name of Chef Ripert’s assistant and I stalked her. When I didn’t hear back, I said, “Ok, you and I are about to become best friends.” I showed up at the restaurant to leave another hard copy of my resume. I would email her three times a week and call her four times a week until she finally responded. She owns Ardesia, the wine bar, and the Camlin in Brooklyn now.

Did ICE prepare you to work at Le Bernardin?

I felt comfortable in the kitchen because during all the modules at ICE you’re in a kitchen environment. You learn how to stand out of the way and not be intrusive in someone else’s space when it’s not your kitchen. I had great chef instructors and they had the same temperament and demeanor as the chefs at Le Bernardin. 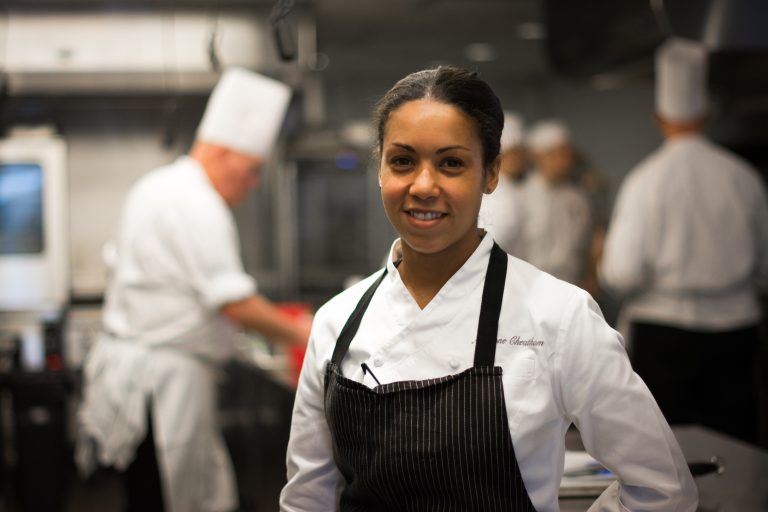 Yes, I think I have. When I tried to put things on the menu at Le Bernardin, Chef Eric would say, “It’s really good, but the ingredients are a little too humble. We have to elevate the dish a lot more.” So I learned the Le Bernardin style of elevating ingredients, making them more than themselves. Then working for Chef Marcus, a lot of the dishes I put on the menu were too sophisticated because Red Rooster is very casual. So the dishes there were too sophisticated for Red Rooster but too humble for Le Bernardin.

Eventually, I started running specials — dishes that I wanted to do, separate from the Red Rooster menu. One day Chef Marcus said to me, “I’m not sure if you’ve had time to focus on your style. I think you’re still in the process of developing your style.” That made me realize that I do have to push myself out there. And I’m not going to do it when someone else says I’m ready. It’s a moment that you decide that you’re ready.

There’s always more to learn. You’re always going to be learning from different people, from continuing education classes, magazines, visiting other restaurants. You’re not going to stop learning because you open your own place, but you still have to be confident enough in yourself and what you have to share with people. And you have to want to do it, too.

I was perfectly happy working for other people. It’s so safe and comfortable. It’s a guaranteed paycheck and the comfort of knowing what you’re going into every day. But at some point, I had to ask myself: What do I want to convey? What do I want to execute that is my vision every day of the week? Plus, with Chef Marcus, I was working seven days a week, 16 hours a day. If I’m going to kill myself, it’s going to be for me.

Anybody who works in a kitchen and creates food is a very sense-oriented person. It’s about texture, visuals, flavors, aromas — everything that engages the senses. My voice is a reflection of everything about me: not just what I like to eat, but the kind of person I am.

So a dish that I put together is an expression of love, of happiness, of learning. Being from Chicago, having family from Mississippi and a fine dining background, it’s not just those things combined. It’s a reflection of all of my life experiences that have created the person I am, and translating that into the food that I create.