He Said, She Said: Social Media

ICE’s Culinary Management Instructors are seasoned industry professionals who are still active in the industry, working on their own projects while teaching classes at ICE. In this installment of He Said, She Said, Julia Heyer and Vin McCann take a look at social media’s effect on the restaurant and food world. 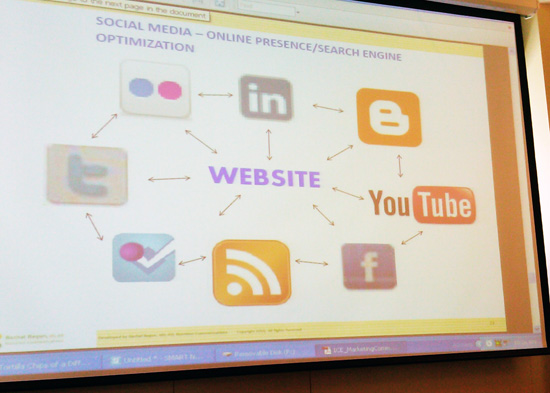 Presently I’m not sure it’s possible to find any restaurant marketing dialogue that turns a cold shoulder to “social media” such as Facebook, Twitter, FourSquare and so on. I’m sure the list will grow, since these sites, like their discount brethren, pop up like green markets — every operator has to have a presence. “Connectivity” is the new mantra of marketers; and there is no doubt that low cost outreach to guests and customers is a useful tool. However, one has to wonder whether or not this new media, like its archaic forbearers, print, radio, and television, will run its course — only in this case in warp speed time.

As if following what appears to be an ironclad historical truth — when everyone is doing the same thing, it’s time to do something else. How much posting, tweeting, and notifications can a mind absorb before it turns off? Let’s face it: all these “friend” and “follower” relationships when viewed through a commercial prism amount to advertisements of a sort, possibly a tad more intimate, in as much as they’re personalized, but nevertheless they aim to sell something to somebody, actually anybody.

I agree that it is time to do something else when everyone tweets and facebooks the same messages out to the world. I disagree that the new media, when used PROPERLY (which is a whole separate conversation), are the same as print, radio and TV ads of old, which noise we tend to tune out. The sheer volume of ads, billboards and other attempts to sell us something is astounding. However, few of the ads I see show me something I either want or need. I have no interest in advertisements for bail bonds (at the present time...), selling my (non-existent) gold cheaply or buying healthy hamburger helper for my 2.6 children.

The advantages of social media are twofold: (a) you reach people who WANT to be reached and (b) sending a tweet takes 20 seconds and no money. In principle, Facebook and Twitter help food-businesses to reach (potential) guests that are interested in them and have clearly shown that by subscribing to their Facebook or Twitter feed. They want to know, be in the know and more importantly be part of the restaurant’s community.

Plus, a tweet or invite for a new cocktail via Facebook takes a minute to two to set up without fees, while an ad, say the new Burger King campaign, carries cost and takes much effort and time — two commodities restaurateurs outside of national chains tend to be short off. We might want to chat about the problems that tweeting and Facebooking can cause when the message and concept of a restaurant are hurt by a 20-second impulse note from the chef (after the wind-down beer and a fight with the owner). Control is not something the new media guarantees.

By “in principle” do you mean the same thing as ‘in theory”? If so, it’s the theory that I’m questioning along with the long-term practical effect. Like Yogi Berra once said, “In theory there’s no difference between theory and practice; in practice, there is.” Inadvertently, you’re making the case for me. Targeting and proper use call for cultivated skills, which are too often in short supply in social media. Witness your caveat about the chef’s impulse note on the stupid owner.

Control of content is a problem and the potential volume of messages, given the low cost in time and money, makes the numbing volume of conventional advertisements seem minuscule. This is less a matter of people being interested in a restaurant than it is the restaurant being interested in them. It’s not about fascination; it’s about commerce. There isn’t an enormous difference between advertisements and endless self-promoting chatter, and there is an overload tipping point for the latter as well as the former. It’s just a matter of time before we hit it.

I don’t think so… (to be continued)