He Said, She Said: Mixology

ICE’s Culinary Management Instructors are seasoned industry professionals who are still active in the industry, working on their own projects while teaching classes at ICE. With such a wide range of experience between them, we decided to ask Julia Heyer and Vin McCann to take a closer look at some of the trends and culinary businesses we keep hearing so much about. In this installment, they take on the world of “mixology.” 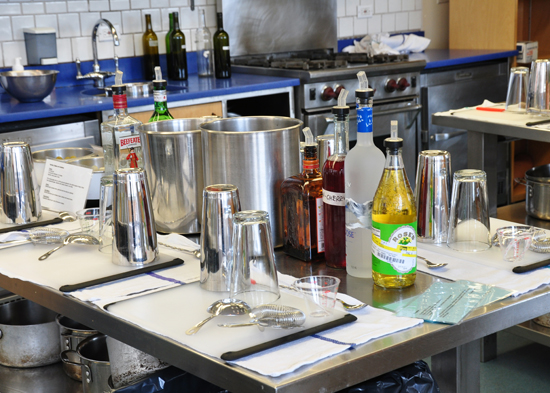 I recently had the best Pina Colada I’d had since one in a Tiki Bar in Hawaii in 1996. There were more eclectic options on the sizeable cocktail list, and Guiseppe, the man behind the bar kindly explained them without the snooty pretentiousness one is so often assailed by in bars with these days. As we were pondering between classics such as a Zombie (one per guest…) and unusual tropical concoctions, my friend B. asked: “So, do you have a mixologist that created some of these drinks for you?” Guiseppe’s face turned stony — very much like the Easter Island figure jar holding the fuzzy pink flamingo drink stirrers. “We are Bartenders,” he said (the voice implied a capital B). I immediately took a shine to him. You cannot open a food-related publication nowadays without being assaulted by some hyped story about a mixologist — armed with handlebar mustaches, tattoos, a pipette and a love for obscure bitters and mainstream liquors — protruding the myth that they can change how you feel through the amazing beverages they, and only they concoct. Note to mixologists: It is the liquor, not the bartender that tends to do that, unless you add unusual conversational skills and a nice dose of eye candy to the mix.

Julia, we actually agree. How sharp can one’s taste buds be on the second drink, never mind the third? We drink to relax, socialize and slip into a slightly altered state of consciousness. Liquor and hospitality nurture the effort. Historically, good bartenders, aside from making drinks, served those purposes quite well. They were not the center of attention but stirred the social mix on the other side of the bar. They joked, recounted the ball scores, commented on the news, listened to personal sagas and shepherded their guests to quiet enjoyment. In my mind, there’s a Hall of Fame for my favorite Bartenders, but the list might take up the balance of this post. Suffice it to say, not one was a mixologist. It sounds like Guiseppe’s a throwback. He appears to want nothing to do with the ever-increasing hype. It’s a cocktail for Pete’s sake! It may be possible that some career bartenders suffered intense cases of “chef envy” and launched the “mixology” movement. Why shouldn’t they jump on the bloviator bandwagon? They just want a piece of the action. What are tips compared to feature pieces in the Times, and the promise of a book contract? Let the house-made artisanal vermouth flow!

It’s all about how to sell those cocktails. One way to make a basic drink that’s been around for a while seem special and worth an extra dollar or three is to have it created (or as the current über-pretentious word-du-jour goes “curated”) by someone promotable who can be marketed to within an inch of their life and our sanity— enter the mixologist. “Eine Hand waescht die Andere” – the proverb translates to “one hand washes the other”, or “quid pro quo”. Vin’s artisanal vermouth, absinthe created from the herbs on a Brooklyn rooftop and other regional, sustainable and oddly entertaining cocktail modifiers shaken up with mainstream liquors by our mustachioed mixologists give the promotional machines something to fill space with. It also allows for the liquor companies to move lots and lots of liquor to blend in with these artisanal dreams out of Hobbitville, while helping bars to make good money. That’s a win-win-win ménage-a-trois for the business, and the poor guests at the bar need to contend with a PhD-worthy pontification on Amazonian herb extracts. Could I just have my delightful Venetian spritz, please?

We can’t let the movement turn pub crawls into continuing education chemistry classes. Call me old-fashioned but I prefer the kind of chemistry that kicks in between friends sharing a drink in a friendly spot. Mixology has already lasted longer than the pet rock, so I’m afraid it may be the nascent beginning of a trend. Heaven help us!

I agree that good company in a good spot with a nice drink create the magic — not a mixologist.  As you noted in your chef-envy comment, in many ways they are to the beverage side of the business what the celebrity chef is often to the food angle — a marketing tool. But just as the celebrity chefs are speeding down the inflationary Autobahn towards less significance (remember the time before every cook was a celebrity chef?), I am thinking this term may too. My hope is that in a decade Guiseppe and his fellow bartenders will still make me a daiquiri that would have done Hemmingway proud, without thinking they are re-inventing the wheel or being highly self-important — just making and serving delicious cocktails that make us happy, not pretending to create world peace.