He Said, She Said: Group Eating

ICE’s Culinary Management Instructors are seasoned industry professionals who are still active in the industry, working on their own projects while teaching classes at ICE. With such a wide range of experience between them, we decided to ask Julia Heyer and Vin McCann to take a closer look at some of the trends and culinary businesses we keep hearing so much about. With inboxes being flooded with group-buying offers, the duo takes a look at social media and group buying in the restaurant industry. 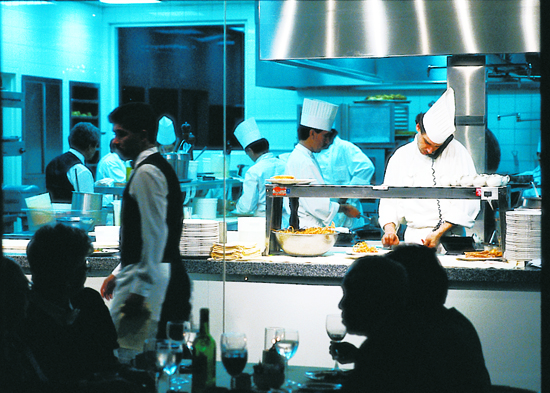 This week, TangoTab, another discount driven website offering restaurant deals, joined the fray that is the internet these days, looking to compete with the likes of Groupon, Village Vine, Living Social, Yipit, Blackboard Eats, Gilt Groupe, and don’t forget Bloomspot. The subject of online discounts, shaken with a double order of social media and garnished with a side order of promotion is alive and kicking in our industry. And they are not the only tools out there. Just last week WNYC radio aired a story about twittering and tumblring in the restaurant scene, which raises the questions: How to use this brave new world? How do you leverage your strength without giving away the house or looking like a desperate, sinking ship to your existing or potential future guests?

Julia, like most “new” things in our business, this hi-tech discounting is the same age-old practice with zippy new gilding. Now you can give the ranch away to thousands instead of hundreds. How to use this technology is less of an issue than why bother? Discounting in a slim margin business like ours is never a winning strategy unless your gross profit margin is stratospheric, something akin to Dunkin’ Donuts’ margin with Daniel’s check average. Like all technology, if one uses it ahead of the pack, it may bring some incremental benefit but when countless others (and critical mass is what the internet corrals) use it, whatever competitive advantage gained is diluted and the operator is left with the time-honored basics to fight for market share — is the food good, does the service match, and is the value equation gob-smacking? (English characterization in honor of the wedding.)

Why bother? While I agree with you on the erosion of value perception and those pesky slim margins (the restaurants not only extend a discount to the guest but tend to owe hefty fees to the online discounter. Groupon, for example, takes half the money the user actually pays, so it’s really a 75% discount the restaurant needs to pick up — Wowza!), online discounting can be effective when tightly managed. If a restaurant operator controls when he lets guests use the discounts and presents it as a specialty offer — thus cranking up revenues at off times and then makes sure they spend more then the discount is worth, then such promotions can make economic sense.

There’s are reasons restaurants have off times — either the concept is weak in those hours or the market has moved on to other turf. More places have gone out of business trying to build Mondays and Sundays than Groupon has subscribers. The problem is that discounting has a way of erasing a restaurant’s value formulation. We’re better off offering menu price point specials, or value-added elements than 20%, 50% or 75% off. The strongest offer a restaurant operator can make is free, but what good does it do the operator? And I’m not sure that the discount customer ever buys in. They’re a special breed — similar to coupon clippers. Once they grab the deal they just move onto the next. Not much brand loyalty with this lot.

As the Germans say, “Alles hat ein Ende nur die Wurst hat zwei,” which literally means, everything has an end, only the sausage has two. There will be a shake-out in the online discounting scene when the ever-so-non-loyal coupon-clippers not only move to the next deal in their inbox, but also start shopping around for the coupon providers. Groupon didn’t sell itself for a fortune to Google (I wonder how it must feel to say NO to six BILLION dollars?) banking on the loyalty of consumers. It will be interesting to see which online services will survive and in which format. It seems a fair bet that, just like for restaurants, it will be the ones with the good, nay jolly, gob-smacking product and value perception that will persist.