He Said, She Said: Celebrity Chefs

ICE’s Culinary Management Instructors are seasoned industry professionals who are still active in the industry, working on their own projects while teaching classes at ICE. With such a wide range of experience between them, we decided to ask Julia Heyer and Vin McCann to take a closer look at some of the trends and culinary businesses we keep hearing so much about. In this edition, they take on celebrity chefs and whether you need to have a name to be successful in the food business. 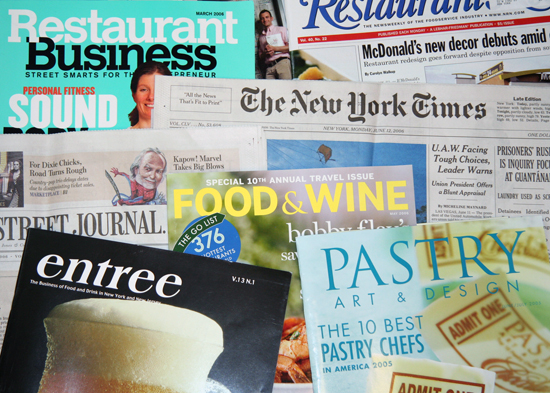 Last week, a restaurant marketing and PR manager told me that in a certain town in this country, you could not put a restaurant on the map without a chef attached to it. Owners don’t count. Managers or hosts are uninteresting. Unless there was a chef (preferably hot, young, tousled-haired and tattooed) or at least a mixologist to promote — and you know how I feel about mixologists — it wasn’t going to work. The press, organizations and consumers in the market demanded it. So she insisted.

Clearly, this PR manager hasn't yet, in the words of our formerly beloved LBJ, discovered that there is a “difference between chicken s--t and chicken salad,” and that food is only a part of the brand formula that makes restaurants successful. This issue is also not unrelated to the ‘celebrity’ movement in the proliferation of spirits brands where the so-called celebs (have you noticed the low hurdle for who qualifies for the moniker lately?) fall flat on their faces when they rely solely on their notoriety. The ‘celebs’ are surfing against the tide of declining wealth, rising costs, lasting recession and ‘celebrity fatigue.’

I should have brought you back a can of Paris Hilton’s canned prosecco, now available in European supermarkets. Talking about falling flat on one’s face (and true to form), Todd English took a shellacking in the New York Times last week, providing a great case study for our Culinary Management students about what happens when a brand is largely based on a personality, without the underpinnings of values and performance. These chefs may be culinary geniuses but they can be clueless when it comes to managing their ‘brands’.

Perhaps they just fall prey to the flattering hacks who are only into placement. Most PR types could care less about the integrity of the business. ‘Celebs’ are meat the flaks can stick their pens into. It's not my thing, but give me a one-eyed, one-armed woman pastry chef and I'll give you a phonebook-thick portfolio of publicity. But then what happens when the hoopla quiets? There is a huge difference between publicity and profitability born out of performance. Ask Rocco DiSpirito, ask Gordon Ramsey, ask Alain Ducasse and now you can ask Todd English.

These skilled chefs are not alone guilty of creating this machine though, but more likely a cog in the opportunistic wheel spun by writers, bloggers and various other fast-talking media-types, which at this point is cranking out ‘celebrity chefs’ faster than the Chinese produce iPads. I don’t buy it and for me, it is the equivalent to what a former boss of mine called the use of mint in pastry — the garnish of the uninventive. Vin, I feel for talented cooks and chefs that do not carry the circus-pony gene, which brings me to a question (besides why there is such a lack of creativity in the marketing and PR machine): As restaurateurs and chefs, how do you best manage the press to create restaurant recognition and brand? How do you prevent “Den Ast abzusaegen auf dem man sitzt,” which means to bite the hand that feeds you, in this case the media monsters we possibly created in the first place?

Julia, everyone loves a good story.