He Said, She Said: America’s Next Great Restaurant

While it seems like just about everyone has a great idea for a food business, ICE’s Culinary Management Instructors are seasoned industry professionals who have actually opened and operated their own restaurants and food businesses. They are still active in the industry, working on their own projects while teaching classes at ICE. 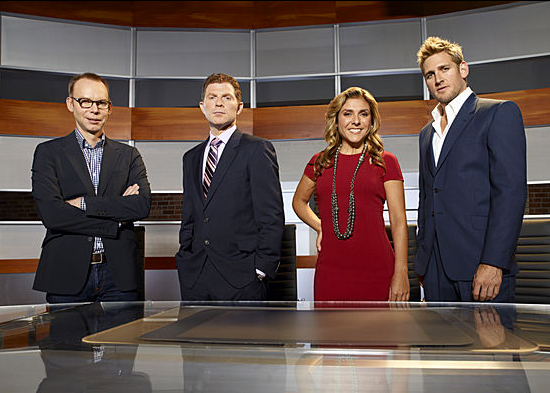 Julia Heyer is a restaurant consultant and owner of Heyer Performance and has worked on projects from Dubai to Mexico City. Vin McCann has managed restaurant operations ranging from $500,000 to $400 million in revenue and divides his time between teaching, consulting and operating a landmark inn and restaurant, The Wells House, in New York's Adirondack region. With such a wide range of experience between these two, we decided to ask these two to take a closer look at some of the trends and culinary businesses we keep hearing so much about. First up, we asked them about food TV and the glamorization of restaurant life in NBC’s new show, America’s Next Great Restaurant.

My initial reaction towards America’s Next Great Restaurant was admittedly a not-so-mild sneer. A reality TV show about creating a large-scale quick-service restaurant business, when this particular segment of the market is not exactly lacking in competition and tends to be devoid of sex appeal — really? Who do you know who fantasizes about working and spending time at a fast food place? Cooking and restaurant management is physically demanding work, with looooong hours on your feet, usually at times when the rest of the world enjoys leisure time such as evenings, weekends and holidays. It involves dealing with the random and unexpected curveballs. In a day you may encounter a broken down compressor, no-showing staff (“My rabbit ate my metrocard”) picketing by the “Lobster Liberation Front” and your linen order not arriving.

You are so happy to sit down after service that it does not matter that you are sitting on boxes of sugar packs next to the electrical panel in the basement. As I was growing up in Germany there was a saying, “Wer nichts wird, wird Wirt.” It essentially means that people who have nothing going on, and are going nowhere fast, end up running restaurants. I like to think that’s not a reality today, but at the same time, chefs aren’t rock stars living a glam life. Don’t get me wrong — the joy of making people happy, making things happen and juggling multiple details are all highly rewarding. Plus there is food involved! But glamorous it is not. Restaurants and glamour have as much to do with each other as reality has to do with reality TV.

Our business can be characterized lots of ways, but “glamorous” is not one that leaps to mind, though the age of the celebrity chef has warped the general perception of the industry. The premise of this show is sort of entertaining, but the title cannot hide the pretension fueling its conception. Reality TV bears as much relation to reality as haute cuisine to the Sabrett hot dog cart. The show would be more aptly titled, “America's Next Marginally Successful Quick Casual” — which is to say low-priced, service-compromised, commodity food–based eating place. But I admit that doesn’t resonate with the general public, and I'm nearly certain that the panel of experts wouldn’t be too enthused about investing in such an operation, unless they were being paid better than equity rates to pretend that they were. Even the uninformed, food-loving American public grasps the notion that restaurant concepts are as profligate as, well, ideas in general, and that any restaurant needs to serve a market of sorts.

Are New York and Los Angeles really waiting for Hick's or Wood, Waffles and Wings? I can't speak for Minneapolis, but its last big creative splash was the Blizzard from Dairy Queen. The show might serve some educational purpose —we'll see. Certainly the drama (loosely termed) in getting a place financed, built and opened might hold some interest. But that's not where this thing seems headed. On the other hand 12 weeks of selling and refining a concept hold about as much interest as watching stock simmer. True to the genre, the players in this drama may create some interest, but they will never grab us the way Kate Moss struts her stuff. My guess is we may have hit the titillating high point in “saucy balls.” Thanks Joey, for a memorable concept.