Explore the elevated version of Nutella.

Every once in a while, a technique or a preparation will inspire me to reflect on some of the philosophical aspects of cooking. If I were to reduce the act of cooking down to the simplest of concepts, I might suggest that it is merely an attempt to add value to a raw ingredient, an effort to improve on nature. Cooking is transformative – we apply techniques to develop flavor or employ processes in a way that provides better access to nutrients in our food.

As cooks we might seek to treat one precious product with minimal, focused attention to amplify its unique character, or we might combine two or more ingredients to explore complexity. Like a composer creating a piece of music, a cook can tease out an ingredient’s inner "voice" as both a soloist and as a member of a chorus. This latter idea, the notion of achieving a result that is greater than the sum of its individual parts, is of particular interest to me. It’s the engine that drives most culinary creativity, whether we’re combining dozens of flavors or just two. A perfect model for this idea is the ethereal union of chocolate and hazelnut in gianduja.

For those unfamiliar with this traditional delicacy of Italy’s Piedmont region, I often refer to it as the high-brow ancestor of popular chocolate-hazelnut spreads like Nutella. If you only know the latter, the former may just change your life. Where commercial spreads are typically composed of hazelnuts blended with vegetable oil, low-fat cocoa powder and sugar, gianduja (also spelled, perhaps more accurately, gianduia) involves a more conventional chocolate-making process: milling and refining whole roasted cacao beans and hazelnuts together with some sugar and cocoa butter. In fact, there are standards that exist dictating the minimum percentage of hazelnut and cacao content in gianduja – and some swear that only the prized hazelnut variety tonda gentile delle Langhe can produce the genuine article. Though many makers exceed these requirements, the European Union requires products labeled as gianduja to contain at least 20% hazelnut and 32% cacao solids. 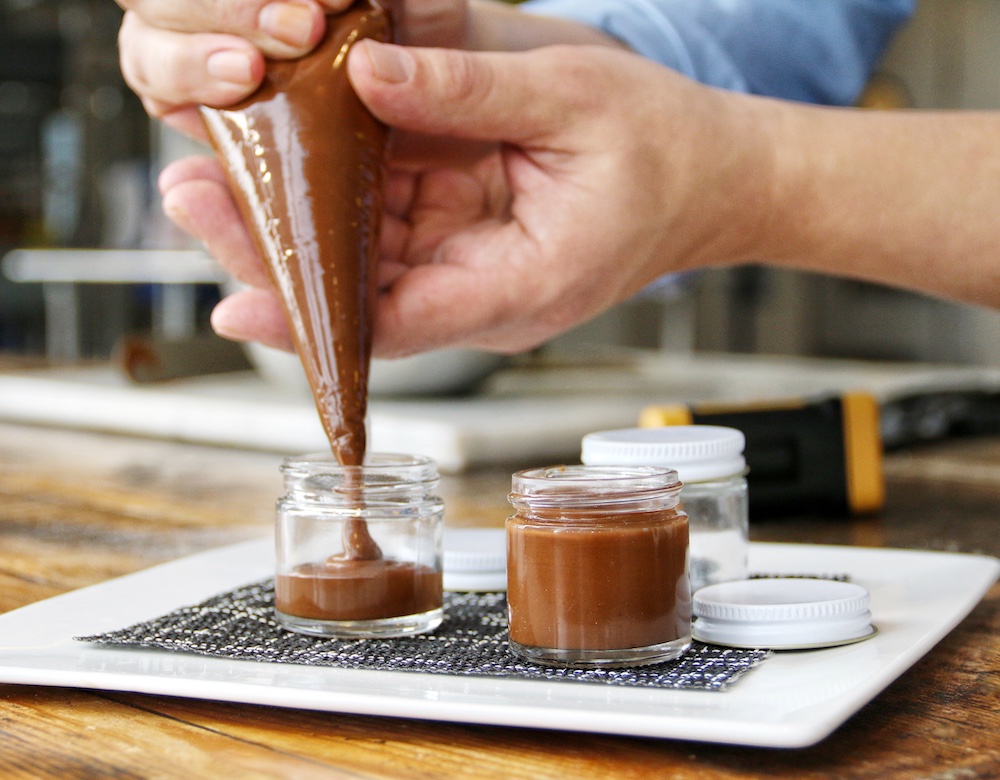 While mass-produced spreads we find in every supermarket and bodega are a modern invention, the origin of gianduja is deep and complex. The addition of nuts to chocolate in northern Italy in the 19th century may well have been a delicious match made due to proximity, or perhaps a novel way to extend expensive cacao beans and sugar in periods of short supply. The name no doubt derives from a puppet character whose act fused entertainment with politics and came to symbolize civic pride among the residents of Turin, the likely birthplace of the confection. Some suggest the character’s trademark tricorn hat inspired the triangular shape common of single-serving-sized giandujotti, but function rather than form may be the real reason. For a thorough and well-researched history of gianduja, I highly recommend reading the deep dive offered up in a series of posts by writer Scott Craig. Below I explore two approaches: a traditional, though time-consuming version, and a simple Nutella-inspired spread that can come together in minutes.

When I teach the long-form courses in the ICE Chocolate Lab, I often include this gianduja among the multiple batches we produce. My formula pushes the roasted hazelnut content to roughly 30% and a cacao content of 35%. There are full-on milk chocolate versions of gianduja commercially produced, but I often add a very small percentage for body, which is purely optional and can be removed for a dairy-free version. When selecting a cacao bean for this preparation, I’m looking for a strong supporting role rather than a star player. In theory, a fruitier bean with a touch of acidity (like Madagascar cacao) may sound like a good pairing with nutty flavors, it can be difficult to strike that greater-than-the-sum-of-its-parts balance. Instead, I tend to lean on cocoa-forward beans like the Uganda Semuliki currently in the lab or Ecuador Camino Verde, which has its own floral, nutty qualities. And this traditional confection does require a small table-top grinder or melangeur to refine to proper fineness; my hope is that sharing this recipe will inspire chefs to invest in one for their kitchen and to explore its multiple uses.

A quick note on tempering: because gianduja contains nut oils and less cocoa butter, it won’t crystallize into the firm, brittle and snappy texture of couverture chocolate. As it would be difficult to release from a conventional mold, most commercial gianduja is deposited into trays or pails. Tempering is still important, and all of the typical methods can be used for traditional gianduja. I also temper the softer spread, typically on marble as indicated, or with 1% stable cocoa butter crystals from our EZ-Temper unit.

A quick and versatile alternative is to prepare a spread with finished chocolate and a prepared nut paste. I personally love the caramel depth of a high-quality sweetened hazelnut praline paste, but virtually anything can be swapped in – pistachio, cashew, sesame, peanut or even a cookie butter. As the primary ingredient, bear in mind that the sweetness will be dictated by the nature of the paste used; an unsweetened paste may necessitate balancing with a sweeter chocolate. The finished spread can be piped into a jar for use as a classic pâte à tartiner, but it also makes a wonderful filling for bars and bonbons. The firmness can be adjusted with more or less cocoa butter, and texture can be added with roasted cacao nibs or finely chopped nuts. A pinch of coarse salt can also be a nice touch; because there is very little moisture in the spread, the salt won’t readily dissolve.

Gets hands-on in the chocolate lab in ICE's Pastry & Baking Arts program.

How is Flour Made?