Evidence of a Life in the Kitchen

“If you cook, you are going to get hurt.” The crowd that gathered for a panel discussion on modernist cooking erupted into laughter, but Wylie Dufresne’s observation was gravely accurate. Extreme heat (and cold—working with liquid nitrogen was the object of Wylie’s remark), sharp knives and heavy equipment are some of the perils cooks must navigate in their daily workplace environment. Add to the mix a dash of occasional chaos and the pressure to produce at breakneck speed, and it’s a wonder more chefs don’t bear hideous deformities.

Young cooks are instantly identified by the rows of scars running up their forearms: the reminders of brief skin-singeing encounters with blazing hot oven racks and pan handles. A cook’s relative experience is easily judged by his or her fingertip’s tolerance to heat (a seemingly heat-proof layer of skin inevitably forms with time). Another telltale sign of a chef is the tough, raised callous at the base of the index finger: the contact point of skin and the carbon steel blade of a chef’s knife. This callous never fully returns to soft, supple flesh, even after years of retirement from daily slicing and chopping. It’s a calling card of sorts, a silent testament to one’s lifelong métier. While kitchen scars may fade with time, they rarely disappear completely.

My first ghastly kitchen injury dates back to my days as a baker. The shop where I worked focused primarily on bread and cakes, but we also did some light takeout fare and off-site catering. During the mid-December holiday season, we were catering one or two small parties every night. One of those afternoons, the chef/owner executed one event while I simultaneously staged a second party at another location. I could easily handle the responsibility of the arrangement, but I was probably still too green of a cook to entrust with the logistical feats these parties presented. 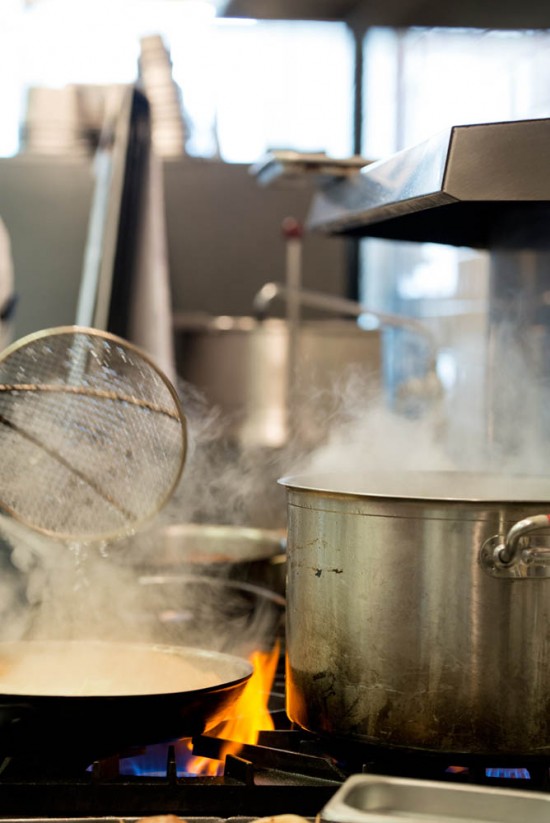 I was wrapping up my prep list with that menu’s protein: a Cajun-spiced, blackened chicken affair (this was the early 90s). Proper blackening technique—as I knew it, anyway—would dictate exposing the oiled, spice-rubbed meat to a fierce high heat and only a little added cooking fat.

In my haste to get everything finished, I ignored the gradual buildup of oil in my smoking cast iron pan. Worse yet, I violated the cardinal rule of adding food to any pan: always place the item so that it falls away from you.

This precaution ensures that, in the event any hot cooking oil splashes, it does so away from you. As I tossed the last chicken breast onto the fire, my face and eyes were stung with a spray of hot and spicy oil. I dropped back from the stove and somehow managed to feel my way to the three-compartment sink for some temporary relief. I splashed my face with cold water, wiped myself off and glanced at the clock.

I was running late and I didn’t have time to assess the situation properly. I managed to arrive at the catering gig fully prepped and on time, but as I worked my chafing dishes I was filled with self-conscious dread. I thought I’d scarred myself for life, that I’d need a shroud to hide my culinary deformity like some modern-day elephant man—all because of one impatiently flung piece of chicken.

As it turns out, the burn on my face was minor and fully healed within a couple of weeks. But it could have been far worse. The lesson learned? Always respect the fire. That scar may have faded, but others have been permanent.

Another early mishap of mine persists in the form of a long-term, conspicuous reminder. A year or so after the blackened chicken incident, I was working my way through a very large pile of onions. It was a straightforward task: hack the polar ends off of each one, score through the skin, peel that off, then halve the onion lengthwise and perform a simple, uniform julienne.

At ICE, our fledgling cooks are taught to tuck the thumb back and under, using the broad surface of the resulting fist to both secure the food and guide the knife while chopping. Of course I knew that then, too. But in my urgency to finish all those onions in time, I either looked up or the heavy chef's knife slipped...and into the mountain of sliced onions went the tip of my left thumb. My reaction was swift. I didn't want to look closely at the damage, nor did I have much time to fret over it. I rinsed my hand in the nearby sink, slapped on two or three Band-Aids, wrapped it with a length of gauze and secured it all with what must have been a foot or two of electrical tape.

And then I went on with my prep. I certainly didn’t forget about it over the course of the night’s work. I was in a sense of denial. I was uninsured and living check-to-check on my cook's wage. I didn’t want to bother with any workers’ comp benefit I may have been entitled to, so there was no professional medical attention given to the mangled digit. After a day or so, when I realized I might have made an error in judgment, I still didn’t seek help. I feared getting yelled at by some nurse or intern for not going directly to the emergency room. Instead, I kept it clean and wrapped, and it eventually healed. The contour of my left thumb is no longer rounded, but now sloped off at a sharp angle.

I’ve heard many stories over the years—likely mythical legends by the time they got to me. The fish bone that went in one side of someone’s finger and emerged months later on the other side. The arm broken in multiple places by an industrial mixer. The fingers severed on deli slicers. I’ve had close calls throughout my twenty years battling in the kitchen, but in comparison to many colleagues, I’ve survived mostly unscathed.

My worst injuries were the result of total rookie moves. A young cook might boast over a particularly gnarly burn or gash, eager to display it as a badge of honor. It’s part of the bravado, the mandated sense of fearlessness that pervades the kitchen. As I grow older, I’m not proud of my mistakes. With time, one increasingly feels stupid over the tiniest nicks and scratches, embarrassed for even a split second’s lack of control. So a word of advice to those starting out in the industry: the second you sense you’re playing too close to the edge, slow down. You won’t work faster with a half of a finger, a burnt face or a broken arm.

Want to study with Chef Michael? Click here to see a list of his upcoming courses at ICE.