With more than 11,000 graduates in the industry, ICE’s alumni network is a hotbed of food and hospitality talent. In turn, it’s no surprise that many of our graduates have found success working together in the field. In the case of Cristian Quiroz and Ilse Herrera, sous chefs at Txikito, La Vara, and El Quinto Pino—restaurateurs Alex Raij and Eder Montero’s trifecta of celebrated NYC restaurants—they may have met on the job, but they get along just like classmates. 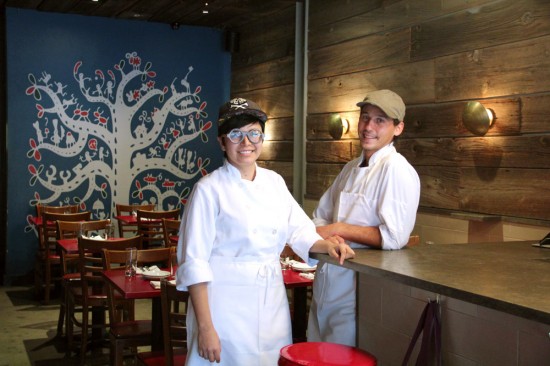 What were you doing before culinary school?

Cristian Quiroz: I worked as a waiter at a place called The Crepe Café back in Chile. It was my first restaurant job and I would always bother the crepe cook to let me make the crepes. He kept saying no, until one day he got tired of me and just let me do it. Soon I was able to manage the station on my own. That’s when I decided I wanted to learn back of house skills, to hopefully open up my own restaurant one day.

Ilse Herrera: I was studying singing in a conservatory in Guadalajara, Mexico. I moved to New York just one week before starting classes at ICE.

What specifically attracted you to the programs at ICE?

IH: I liked that ICE offered immersion into the world of cooking within a short amount of time. The modules were well rounded and the program was affordable. Being in New York City was definitely a big plus.

CQ: The length of the programs (Culinary Arts and Management). I had considered CIA because of its reputation, but my father suggested that I would probably benefit more from a shorter, hands-on program, than a traditional 2-4 year degree. I think he was completely correct. In the end, it depends on the learning style of the person.

CQ: I worked at Txikito for a year and a half and then helped opened La Vara in Cobble Hill. After Alex received two stars in the New York Times for El Quinto Pino, we helped open the restaurant’s new dining room, “El Comedor.” Currently, most of my time is spent at Txikito, but I occasionally work at the other two spots as well. As a personal project, I planned a sold-out Chilean food pop-up last September, which I’m considering developing into my own spot in the coming year.

IH: I was garde manger at Lupa during school, and later moved to The West Branch where I was quickly promoted to the pasta station. After a year, I left New York to spend two months in Italy, and upon my return, I got a job at Txikito through a former co-worker. I started off as a lunch cook and then became the morning sous-chef. I also helped with research and development and staff training for the opening of La Vara in Brooklyn and worked with Cristian on the expansion of El Quinto Pino, where I currently run the kitchen.

What are your proudest accomplishments?

IH: The critical acclaim in the press has been very gratifying in the five years that I have worked for Alex and her husband, Eder. I have also cooked at the James Beard House on two different occasions with Alex and have had the chance to cook my own Mexican dinner at Txikito for one of their “txokos” (a dinner series inspired by Basque private gastronomical societies), mainly focusing on food from the states of Michoacán and Sonora.

CQ: I’m very happy with the job I’ve done in Alex and Eder’s restaurants. In addition to helping achieve two stars at both La Vara and El Quinto Pino, the whole experience of starting two new restaurants from scratch is personally very gratifying and entertaining.

What is a day like in your working life?

IH: I get in at 9:00 am and take a quick inventory of the kitchen. Then I check the morning production list, take on some prep tasks, and manage quality control for the team throughout the day. When the night crew comes in at 2:00 pm, I communicate with the supervisor about any new specials or menu items. I have a lunch break from 3:00-4: 00 pm, then prep is continued until around 5:00 pm. Finally, I do inventory of vegetables, fish, meat, dry goods, etc. and place any necessary orders before I go home.

CQ: Working with Isle has been amazing. Both times we helped open new restaurants (La Vara and El Comedor), it would basically be Isle in the morning, then I’d come in for lunch and dinner service. She would train prep cooks and maintain quality control prior to opening, while I would do the same during service. I remember hearing somewhere that chef/owners normally need two close and very trustworthy cooks to rely on to run a restaurant—it’s definitely been true in my experience.

CQ: I wasn’t looking for the “celebrity chef” life when I got into the business, but I’ve met a lot of people who got into the job thinking it was going to be a piece of cake. You should be ready for long hours and hard work. Certain kitchens and staffs are more pleasant than others. One chef will think screaming is an essential part of his job; others are laid-back and don’t care—but you should show up ready for anything.

IH: There is more to being a cook than just cooking. A lot of discipline, respect for others, teamwork, cleanliness, and speed are required. It’s not the way it looks on television. You have to truly be passionate about food in order to be happy in this field.

IH: I would describe my culinary voice as clean and simple. I believe in staying true to the flavor of each ingredient and searching to complement it in unexpected ways. I have been taught (the Basque way) to get rid of black pepper as a staple seasoning. A little bit of olive oil and salt are all a great ingredient needs. As far as plating is concerned, I like natural-looking food that can make it to the table without looking ruined. I don’t oppose the modernist approach, but I love the example of a chef who once said to me: “Imagine a light breeze brought your salad over to the plate, and… ahh," while letting the greens fall naturally.

CQ: The way I understand food is entirely influenced by Alex and Eder. I have far more experience working with Spanish food—and some Middle Eastern flavors at La Vara—than any other cuisine, but currently, I’m excited to develop a Chilean restaurant concept. Chile is a country whose cuisine has been defined by the immigrants and colonies that have arrived there, especially Spanish, German and Italian. I’m looking to maintain the authenticity of traditional Chilean flavors, but present them in a more creative, appealing way.