New York's Most Delicious Donuts Are Sold at a Car Wash

Yeah, You Read That Correctly

What happens when a former Chanterelle sous chef takes up donut-making? For one thing, New Yorkers get a fresh supply of amazing-quality, artful (read: Insta-friendly) donuts. Add a healthy shake of scrappiness — an essential ingredient for anyone crazy enough to open a 116-square-foot artisanal donut shop inside a busy carwash on the West Side Highway — and you’ve got yourself a quintessential New York story. There’s even a line of yellow cabs in the background. 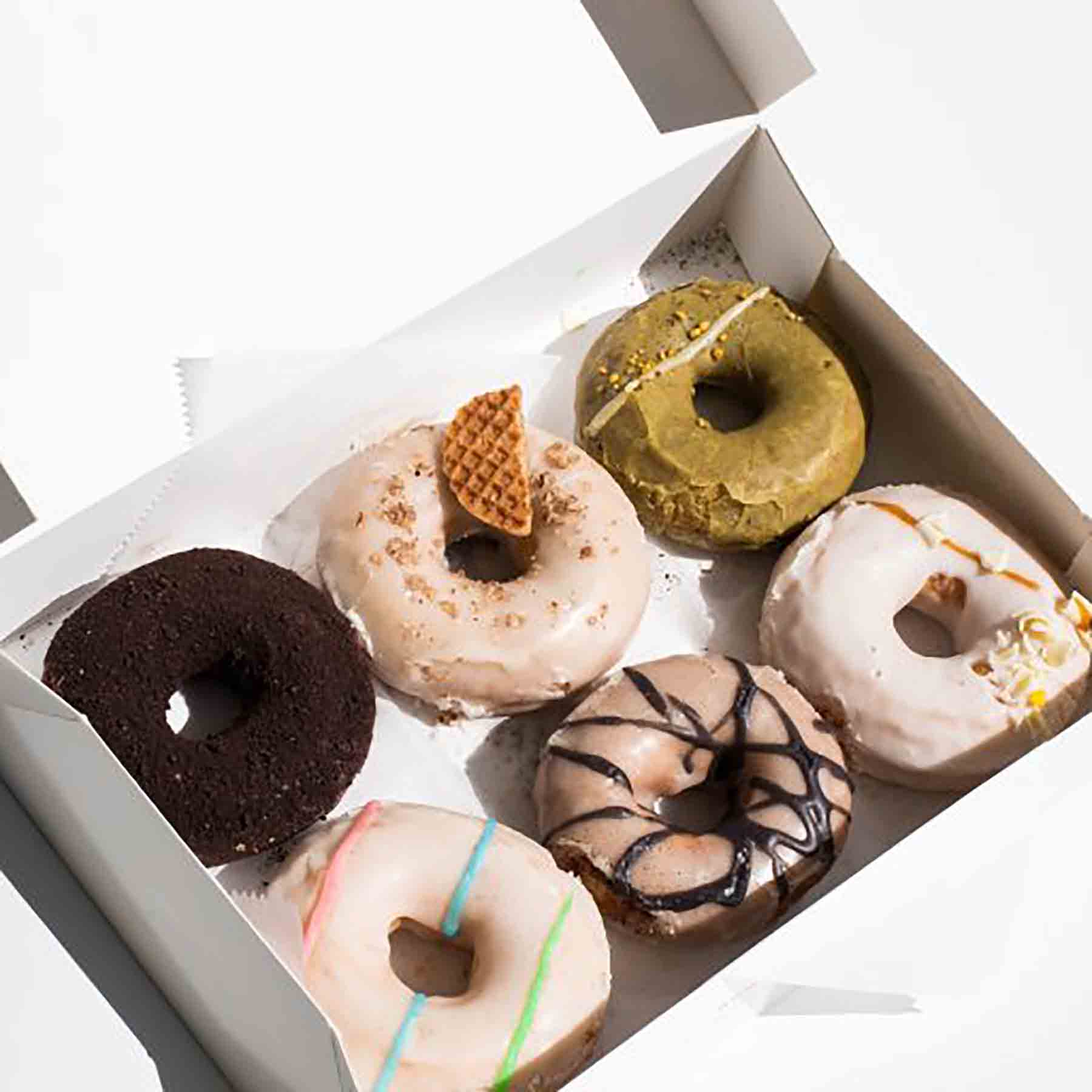 With his hugely popular Underwest Donuts, Scott Levine (Culinary Arts, ‘04) has elevated the hole-y donut to new heights, and has managed to do so in a place where most fledging owners wouldn’t look twice. But in a space the size of most suburban closets, Scott saw an opportunity to reinvent a New York staple and ran with it. Suddenly, Westside Highway Car Wash had a new stream of customers, more interested in the “Car Wash” glazed donut (vanilla-lavender flavor) than an actual car wash. Riding on the success of their first location, Underwest Donuts opened a second outpost in a similarly transit-heavy area, just a few steps from Penn Station.

Recently we caught up with Scott to chat about his unlikely entry into the artisanal donut game and his definitive stance on a very heated topic — dunking.

Caitlin: Can you explain the success of Underwest Donuts?

Scott: I believe it started with having an interesting story. I don’t think that’s a prerequisite for success, but it just happened to be what I had in advance of opening Underwest — the fact that it’s in a unique location in a carwash. Especially at a time when leases and commercial kitchens are extraordinarily expensive, especially in Manhattan.

Part of it was luck, part of it was timing, but most of all, there was an interesting story and a good product to back up the whole thing, which was the clincher. The story would have faded if the product weren’t good.

And you have a fine dining background too, right?

Yes. I worked at Chanterelle (Ed. note: helmed by ICE Director of Culinary Affairs, David Waltuck), and that was my longest tenure in the finer dining restaurants. I also worked at Del Posto and Le Cirque for shorter amounts of time, before I ended up at Danny Meyer’s Union Square Events, which used to be a catering company. That wasn’t fine dining per se, but it was a catering company started by the folks of Eleven Madison Park, so they had high standards. That was my culinary background – but none of it was in the pastry kitchen.

Originally, I wasn’t considering donuts. I saw what Shake Shack had done to hamburgers, and I wanted to take the same approach to bagels. I liked how [Shake Shack] took something that was so commonplace and put it on a higher plane. Then the real estate issue came in. Not being independently wealthy, I needed some help on that front. My father-in-law, who’s a car wash owner and operator, had some space in his car wash on the West Side Highway, and I decided to open something in that 116-square-foot closet-like space. I thought, If I’m opening a food establishment here, what can I do with the space I have? The idea of coffee and donuts was born out of the fact that there’s a big morning business at the car wash, and I wanted to capitalize on that – coffee and donuts were a no brainer.

It’s kind of brilliant because you have the regular customers and then you have the crowd that just goes there for the donuts and, ya know, the Instagram.

Right. I learned quickly that my product doesn’t speak to the folks lining up to get their car washed in the morning like it does to folks who are coming just for the donuts. The price runs a little high for some people. I can understand them not wanting to spend that much money on a coffee and a donut.

How did you train yourself to become a donut expert?

I had no experience in donuts, so I bought a hand-held donut depositor. It looks like one of those contraptions at the diner that they make pancakes with. You press the button and out drops pancake batter, in a measured way.

I bought one and just started doing it in my apartment. My wife was pregnant at the time, so we say that our first child was nourished with donuts. I started training myself at home. Although I never worked in the pastry kitchen, I think ultimately it fits my personality better as far as just being more recipe-driven, and more exacting in a lot of ways. I felt comfortable operating in that world. I took three or four donut recipes from different sources, and then made them as the recipe called for them, then slowly I learned what certain amounts of certain ingredients did. It’s all about ratios.

I started tinkering and playing until I got my formula, and then once you start adding different ingredients, you have to tweak again. For example, if you add nut paste, you’re changing the fat content, so you have to compensate. If you add fruit purée, you’re adding water content, so you have to compensate. I went down these different avenues and adjusted until I got something that I could call my own. I think it took me six months to come up with recipes that worked well on my stovetop.

It was a little shocking. But there was no turning back — you sink or swim. You figure it out. And here we are today.

Back to the donuts — besides being delicious, they’re also super Insta-friendly. Do you ever create things with an eye toward social media?

Our approach to donuts always puts an emphasis on presentation, so the Instagram-ability is a byproduct of that attention to detail. I would say that we consider in advance what works well from a photographing standpoint.

When we’re changing the menu, we think about the lineup and what colors are included. If we’re going to make a springtime donut, do we want to use certain colors? When you’re making donuts for a foodie event, you have an opportunity — there’s a good chance a lot of people will take photos so you want to bring something that looks good and that people can post. We want to continue to have that strength on social media.

It was a little shocking. But there was no turning back — you sink or swim. You figure it out. And here we are today.

What is the best donut you’ve eaten in recent memory?

The coconut lime donut that we have on our menu right now — it’s maybe my all-time favorite.

I’m really excited about a new springtime donut that’s coming out soon, too. It’s going to be very honey-focused, with some floral notes like chamomile. It’s still a work in progress.

Coming down to the last question and it’s a tough one: what is your stance on dunking?

What’s my stance on Dunkin Donuts or dunking?

The verb of dunking the donuts.

The action of dunking donuts. Hmmm… I don’t think about my donuts as something that I would dunk, but a plain old-fashioned donut for sure. Dunking cookies in milk, donuts in coffee, I’m all for it. But with our donuts, I wouldn’t want that flavor attached to whatever donut I’m eating. But for a plainer donut, that would be great, sure.

All right. So pro-dunking in certain situations.

Yeah. It’s definitely not a one-size-fits-all model. Again, in the right situation, dunk it.

We can call it qualified dunking.

Ready to embark on a career in the culinary or pastry arts? Click here for more information on ICE’s career programs.