A Cut Above: Q&A with Chef Norman Weinstein

He’s the leading authority on all things sliced, diced and brunoised, and he's also the instructor of Knife Skills, one of ICE’s most popular recreational culinary classes. I had the chance to chat with resident knife guru Chef Norman Weinstein as he dished on the facts, the fears and the misconceptions about knife skills 101.

KS: You’ve been in the culinary field for almost three decades. What is it that originally drew you to knife skills in particular?

NW: I guess you could say I was in the right place at the right time. I was teaching Chinese cooking at The New School Culinary Arts Program back in 1994 and my appreciation for the need for good knife skills came from these classes. My path here began shortly after ICE, which used to be Peter Kump’s Cooking School, was purchased by Rick Smilow, the current owner. At a chance meeting I was asked to consider teaching classes. That was in October of 1995 and now I’m going into my 15th year teaching more than 130 classes a year, most of them knife skills.

KS: Do you have a certain approach to knife skills that has made you a master?

NW: My knife skills classes are primarily focused on reducing stress at the cutting board. That process starts with the proper grip of the knife. A bad grip is the start of bad technique. If you don’t hold a knife properly then there’s no way you’re going to cut with any degree of ease.

KS: Having recently added “author” to your list of professions, what was the biggest lesson you learned from writing Mastering Knife Skills?

NW: The biggest lesson I learned from writing the book was how to put into words something that is actually learned by “feel.” How to describe the proper grip, arm movements and cuts, such as “dice,” was definitely a challenge, but a challenge that I accepted and overcame and was successful at demonstrating. I was also fortunate to have a lot of good color photographs and a DVD, all of which help teach along with the text. 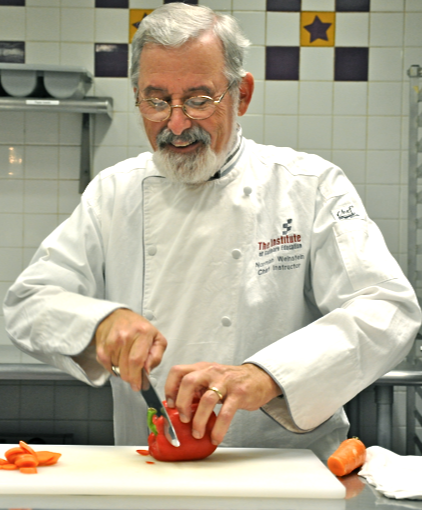 KS: What can potential students expect in taking your Knife Skills class?

NW: My classes are basically about techniques accomplished with reduction of stress. The students come to my classes with longstanding habits that produce a lot of stress in their arm and affect how they cut. Stress comes directly from the way you hold and use a knife. Knife Skills I is primarily devoted to retraining that muscle memory and re-thinking the way you use knives.

KS: What’s the best piece of advice you can share with our readers about how to hone their knife skills?

NW: The number one piece of advice I can offer is that you need to be aware of what knife you should be using for each particular job. You don’t put a nail in the wall with the handle of a screwdriver. You use a hammer. It’s the same thing with knives; fit the tool to the job

KS: What are the biggest problems you encounter in teaching knife skills?

NW: As I mentioned before, most of the problems come from the way people hold a knife. That’s really the starting point. They take their knife and press down on their food, crushing it. That immediately causes incredible tension. The next problem is fear of knives - especially sharp ones. We work on overcoming this fear and often replace it with confidence. They also learn the importance of knife maintenance, which along with proper usage, practice, and overcoming fear, starts them on the journey to mastering knife skills.

Chef Norman Weinstein has been teaching at The Institute of Culinary Education for the past 15 years. He has been profiled in Wine Spectator and the New York Times Magazine, and has appeared on the Food Network. Chef Norman is also the author of Mastering Knife Skills (Stewart, Tabori & Chang, 2008) and was the 2003 honoree of the New York Association of Culinary Professionals.