Chef Diego Lozano is on a mission to expose the pastry world – and his own countrymen – to Brazil’s multitude of exotic and largely unknown ingredients. The owner of pastry school Escola de Confeitaria in São Paolo spends one month a year creating new recipes and developing new techniques for classes. His prerequisite before updating the curriculum? Testing his findings out in master classes around the world, like he’ll do at ICE's Center for Advanced Pastry Studies this month.

Chef Diego began baking with his grandmother's chocolate cake recipe as a teenager, then took Confectionery and Bakery classes at SENAI, an industrial school in São Paulo, where he graduated as a Food Processing Technician. He went on to work at Ducobu Patisserie and Chocolate World in Belgium, followed by São Paulo's famous D.O.M. restaurant under Chef Alex Atala. Chef Diego has represented his country at The World Chocolate Masters in Paris as Brazilian Chocolate Master in 2007, a finalist in 2008 and Brazilian Selective Winner in 2014, among other accolades in magazines and at competitions.

Known for innovative shapes and textures in picture-perfect pastries, Chef Lozano is always looking for unique design elements, usually inspired by architecture seen in books or through his travels. On a recent trip to Japan, he discovered pastries distinguished by more than design. “In Japan, there is a very strong culture for local pastries,” he says. “They are using French techniques combined with local ingredients – they have a special feel for it. They try to use more natural colors and natural ingredients.”

Of course, Japan’s pastry culture has infiltrated the international market with matcha creations at bakeries in trendy food cities, from New York City and London to Toronto and Sydney. Asia’s unique citrus, yuzu, is often used to represent Japan as well, from themed specials in New York, such as a yuzu yeast doughnut in Doughnut Plant’s Taste of Japan series, to mainstream offerings like a Tokyo chocolate in Godiva’s Wonderful City of Dreams collection.

Chef Lozano believes Brazil nuts can come to represent his country in a similar way, starting with a spin on the Paris-Brest, a traditional French dessert made with choux pastry and hazelnut or almond praline, for which he substitutes Brazil nuts. 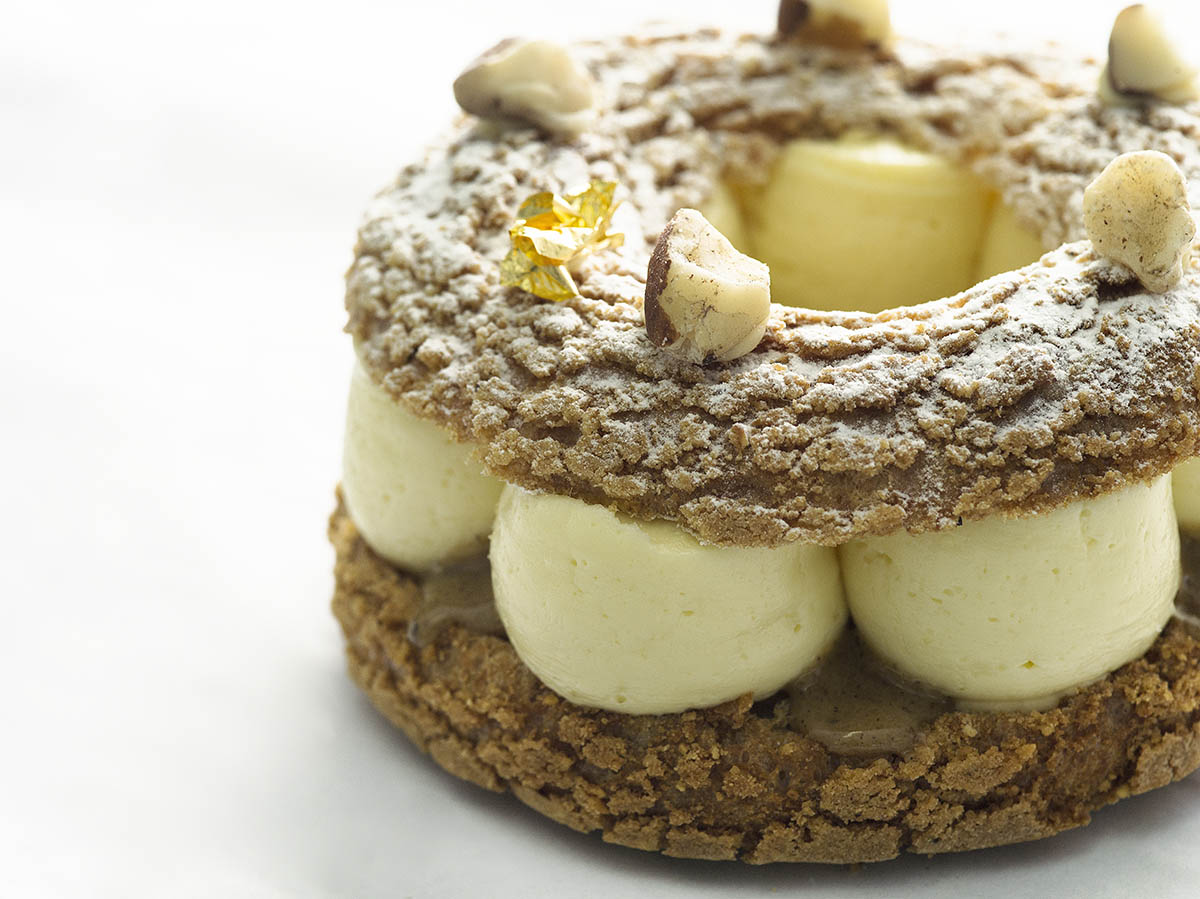 “I’m trying to make as many things as possible with Brazilianian nuts,” he says. “This is something I do with communities to improve the way they produce local ingredients.”

Native to the Amazon and considered a superfood, Brazil nuts are widely available outside of Brazil and reportedly have health benefits for digestion, skin and cholesterol levels, among other documented claims. Chef Lozano boils the Brazil nuts with milk then blends the combination with sugar for cream, fillings and a base for mousse. He uses the Brazil nut in a caramel cream, mousseline and the pâte à choux (choux pastry) for his trademark Brazil Brest.

In 2015, ICE Creative Director and pro Pastry Chef Michael Laiskonis recognized the opportunity for variation with pâte à choux, the foundation of a Paris-Brest. “Given that the standard formula of liquid, fat, flour and eggs is fairly constant, I get the impression that few chefs ever adapt beyond the first version of the recipe they acquire as a student or young cook,” he said. “That’s a shame, because there is quite a bit that can be discovered and understood by making subtle tweaks to fine-tune the recipe and raise the bar for choux.”

Ever the exception, Japan has long had a matcha choux pastry, and famous French Pastry Chef Dominique Ansel features matcha ganache in the Paris-Brest at his Tokyo bakery. He even created a California-inspired Paris Brest, incorporating orange blossom ganache and chocolates shaped and colored like golden poppies, the state flower, in Los Angeles. At the Mandarin Oriental Taipei, Executive Pastry Chef Yam Lok Hin uses local fruit in pastries for afternoon tea at The Jade Lounge. Among the intricate tea cakes – a lychee osmanthus choux.

Chef Lozano says his country has thousands and thousands of ingredients that even Brazilian people don’t know about. He’s experimenting with South American crops, such as tapioca, açai, cupuaçu (a tree related to cacao), cumaru (a flowering tree related to peas with bean seeds), priprioca (a root native to the Amazon), uvaia (an acidic fruit with health benefits from a Brazilian tree), and caju (the fruit from a cashew tree).

“As a pastry chef traveling all over the world, I want to introduce people to these ingredients in my classes with a good pastry in the Brazilian style,” Chef Lozano explains. “I know a lot of [culinary] chefs are trying to use local ingredients and in pastry, I don’t see it that much.”

Plus, explore our Pastry & Baking Arts program to turn your dessert passion into a career.