The versatile vegetable is a staple for sustenance, flavor and cultural significance.

It is always a stirring question: “What is your favorite ingredient to cook with?” I have used so many wonderful ingredients and been introduced to such a wealth of flavors and textures over the years, that it is difficult to identify a single answer. There are, however, a few ingredients that constantly amaze me, not necessarily due to flavor, but more a case of impact on the world and variants of applications across global cultures. Potatoes are one such ingredient.

May 28, 2020 by Barry Tonkinson — Director of Culinary Research and Development

We tend to take potatoes for granted. The staple is a “simple," readily available, easily grown tuber that has been a part Western culture for at least 400 years.

The potato was cultivated by the Inca in Peru around 6,000 B.C. Grown underground, it is shielded from common growth issues that other staple plants face such as toppling or insect infestation, which allowed the potato to become a prime ingredient in the Incan diet. Andean archeology presents a plethora of evidence pointing to the importance of the potato across communities in the region. The wild potato was originally consumed with clay and water to allow the toxic solanine and tomatine to “cling” to particles in the clay and pass through the digestive system of the human body without causing sickness. With crossbreeding, a stable plant safe for consumption evolved. 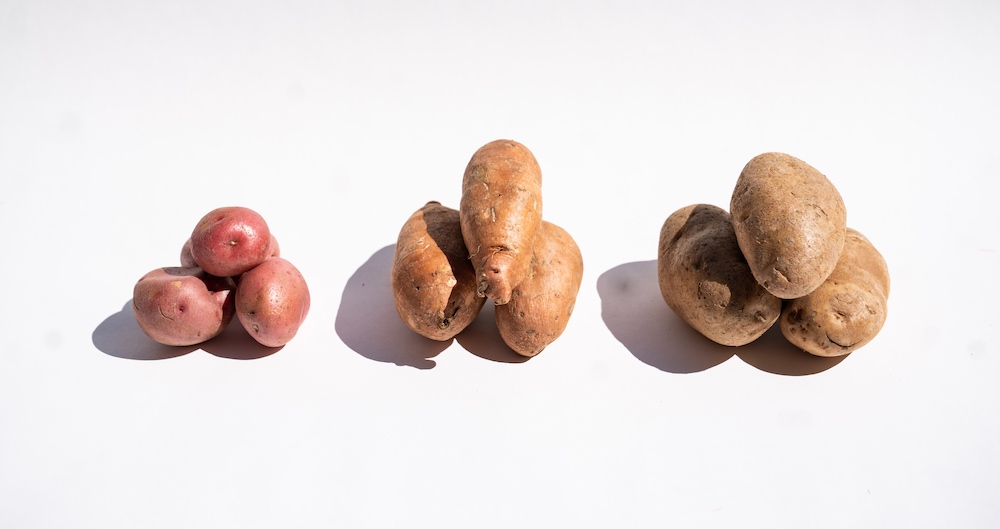 For Europe, the Spanish conquistadors introduced not only a new taste with the potato but the birth of agricultural practices that we still see today. European voyagers found native potatoes in Peru and one of the keys to successful agriculture: fertilizer. Along the Peruvian coast, birds feeding on the frenzied nutrient-rich water would deposit their feces on the nearby Chinda Islands. The Inca used this guano, or accumulated excrement, with an abundance of nitrogen and phosphoric acid to fertilize potatoes.

Upon discovering this prized excrement, Europeans immediately went about creating trade routes for the potatoes and fertilizer. Agriculture boomed and fed a rapidly growing population with vital sustenance. A good source of fiber and potassium, the nutrient-rich potato’s influence on booming agriculture and role in a healthier human population and the growing labor force was a key factor in the West’s global dominion.

The modern potato now leads vegetable consumption across the globe. This truly versatile tuber can be baked, boiled, fried, mashed, pureed and crisped and has stood as part of a number of cultures’ culinary legacies.

Modern potatoes fall into two main cooking types: mealy (starchy) or waxy. Mealy types, such as russets, banana fingerling and Russian, are much denser than their waxy counterparts. The starch swells when cooked and separates, resulting in a dry, fluffy texture that is preferable for baked, mashed and fried potatoes. Alternatively, waxy potatoes’ cells condense when cooked, resulting in a dense and moist texture, perfect for boiling, potato cakes and gratins.

When you find several varieties at the store and are unsure which to use for your particular preparation, you can determine starchy from waxy by the skin. Starchy (mealy) potatoes, such as russets, have a thicker skin. Waxy potatoes, such as Red Bliss, have firmer, thinner skin.

There are thousands of varieties of potatoes. In South America’s Andes region, there are thought to be more than 4,000 native variations. In the U.S., you will tend to find a few hundred varieties that circulate for the general consumer.

With the potato’s versatility, there are almost endless options for preparation and cooking. I personally enjoy a roasted potato, crisped in duck fat or beef dripping, crunchy on the outside, and fluffy and light on the inside. Mashed potatoes can be made with varying texture and flavor. My personal favorite is to make a soft and creamy potato with slightly lactic flavors of crème fraiche and fresh cultured butter.

A world of culinary exploration is at your fingertips with the potato, a relatively inexpensive ingredient with a wealth of opportunity for flavor and texture. Not only has the potato become a staple of modern cooking, it has been a force in human evolution and has helped shape the world we see today. Dig deep and explore the potato.​

An ICE Alum's Journey to Sous Chef at Michelin-Starred Kali

How to Become a Personal Chef