In March 2018, Chef Mike Pergl taught the very first lesson at the Institute of Culinary Education's Los Angeles campus. His first group of Culinary Arts students went on to become our very first graduates on the West Coast. Each day since then, he cherished welcoming his incoming students on Day 1 and toasted his future chefs on Day 108. On April 1, 2020, Chef Pergl passed away peacefully, leaving an unforgettable legacy in culinary education.

"When ICE first opened in Pasadena, the entire faculty went out to dinner," Campus President Lachlan Sands shared in an email to students and alumni. "There were eight of us. We went around the table sharing our motivations for what we do. Chef Pergl was the last person who spoke, and he talked about his devotion to teaching students, that he felt that he was the luckiest man alive because he had been given a second chance to guide students at the start of their culinary careers. He explained that he felt deeply that he had been put on this earth for that reason alone, and it was everything to him. Then he began to cry. Then we all began to cry. It was so unvarnished and pure and filled with love. And that was Pergl."

A native of Southern California, Chef Pergl was born and raised in the San Gabriel Valley. He began his professional culinary career as many teenagers do, working at a local pizza shop. He went on to work on weekends as a breakfast cook before enrolling at the California School of Culinary Arts, where he graduated in 2001. Culinary school launched Chef Pergl’s restaurant career and he fell in love with the field.

Over the years, Chef Pergl worked under the legendary Eric Osley of Three Forks, Joachim Splichal of Patina and Kyle Connaughton, now of the Michelin-starred Single Thread Farms in Napa Valley. Chef Pergl transitioned to education at Le Cordon Bleu, where he was an instructor for 15 years before its closure in 2017. When ICE opened at the same location, he was the first chef-instructor hire. 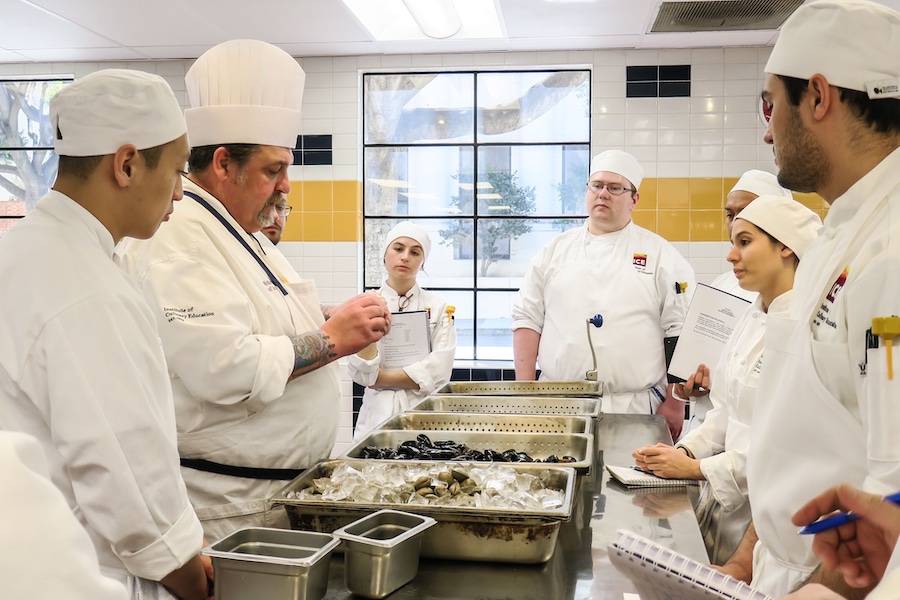 Here, Chef Pergl taught the introductory modules in the Culinary Arts program, which meant that for many of our students, he was the first chef-instructor guiding them in culinary school. He instilled confidence about the basics of knife cuts, meat fabrication and vegetable butchery. He built the foundation on which students developed increasingly elevated skills, which is analogous to the kind of person he was: a pillar of support. His impact in merely two years is ever more evident in the emails that Chef Sands is receiving in response to his tribute.

“Sometimes we don’t give the people that help change our lives the credit they truly deserve until it’s all said and done,” wrote Justin Singleton (Culinary, '19). “I just want you to know I appreciate you and the entire ICE family for helping a kid start his dream. I could never thank y’all enough.”

Dual diploma graduate and now a Pastry & Baking Arts student, Randy Longmire (Culinary/Management, '19) wrote: “I am a firm believer that the good lord puts people in our path, our journey for a reason. Mike was absolutely one of those special people. He was the first chef to care, educate, guide and mentor me on a professional level. We connected in age and humor. His wit was that of one-in-a-million. I am blessed to have known him and called him my friend. ICE LA will not be the same.”

Everton Tulloch (Culinary, '19) shared a similar sentiment. “He was truly a gifted teacher and showed a genuine love for his job and each student. He made me feel at home and at ease in his class. We would have talks after school as he would tell me about his experiences while working and as an instructor. He gave me valuable feedback and instructions that made my time in school and working seamless in terms of the transition. He had a gift that is matched by only a few in his position.”

Even those that did not have Chef Pergl as an instructor shared his impact on their experience at ICE. “I don’t know how he did it, but he managed to even touch the hearts of some of us who weren’t even his students,” wrote Carolina Buchanan, a student in Pastry & Baking Arts and Restaurant & Culinary Management. “His light was so contagious and it shined bright through his smile and the best sense of humor. He was a mentor and a friend to all of us. My heart is broken and he will be missed.”

Former ICE colleague Leicel Ros shared a tribute on Instagram, concluding: “You are the definition of Chef to me. HUMILITY. DEDICATION. SACRIFICE.”

Despite his burly, tattooed appearance, we all know Chef Pergl was a big softy. Culinary Arts student Kate Reeb can attest: “Chef Pergl teared up when I told him that I had expressed to my sons what a positive influence he had on my culinary education and how much I had learned from him,” she shared.

Over the two wonderful years when Chef Pergl and I worked together, I tried, and failed many times, to interview him for this very platform. I would pop into his kitchen lab and tell him that I had a new idea for the story angle. I’d assure him that it wouldn’t really be focused on him, but weeks would pass without an interview. I finally have my feature and was always going to portray that Chef Pergl had wisdom about culinary education, and equally evident, that he formed deep connections with all of his students.

During one of our early chats, he told me that one of his former students from Le Cordon Bleu had named her two dogs after him: one, “Chef,” the other, “Pergl.” I distinctly remember seeing him in the hallway consoling a student crying over a recent heartbreak. It ended in laughter through tears. He cared about the big things and the little things when it concerned his students. He was the chef students turned to with personal issues, he was there to help them through the rough times. He listened. He was patient. He understood. He was a friend.

He also always knew just the right joke to force a smile. Whenever there was an opportunity, he was a comedian and joined in on the laughter. He was, above all, a talented instructor and cook with fabrication and butchering precision and trademark diagrams and sketches: Chef Pergl could draw primal and poultry parts blindfolded.

When he wasn’t instructing, Chef Pergl truly never wanted to be the center of attention. He wanted his students to take the main stage. He never considered what he was doing, nor how, unique or worthy of praise. He never knew the extent of how impactful his personal approach to teaching and sheer kitchen knowledge would be. As Chef Sands concluded in his communications, Chef Pergl was beloved.

Rest in peace, Chef. You will be deeply missed by your ICE family.