A former professional card player bets it all on the farm.

Before enrolling at the Institute of Culinary Education, William “Mac” McCloskey (Culinary, 18) went from Boston University to public relations to professional poker player to employee No. 1 of a startup, where he stayed for 15 years. Today the career changer and former city dweller left Los Angeles to feed Missourians, cooking one farm’s crops for community supported agriculture (CSA) farm share members. 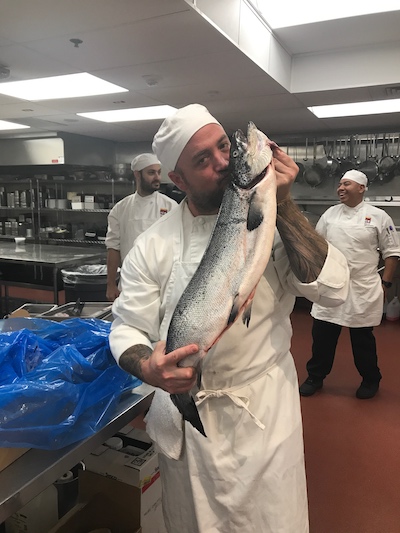 While a student at ICE’s LA campus, Mac drove a Cousins Maine Lobster truck (of “Shark Tank” fame) on his days off from honing his kitchen skills at school on weeknights. He externed at Tallula’s, an upscale Mexican restaurant led by Chef Jeremy Fox, where Mac cooked under Chef Saw Naing. “I staged during Restaurant Week that January,” Mac says. “It lasted seven hours and they offered me the job on the spot.”

At Tallula’s, he was exposed to a unique California perspective on Mexican cuisine, seen through the eyes of Chef Saw, who has a Burmese and Indian heritage and developed fusion dishes like chicken tandoori fajitas. He relished in the ingredients the Rustic Canyon Group restaurant sourced from the nearby Santa Monica Farmers Market. “A lot of the produce changed based on what looked good when we went to pick it up,” Mac says. “I got to go to the market with the chefs and touch, smell and feel what we were using and figure out how to use it.” That kind of seasonal procurement enhanced Mac’s understanding and appreciation for local farms and purveyors.

After a year, he left the restaurant and planned to return to Cousins Maine with his culinary diploma and fine-dining kitchen experience to become the food truck’s general manager. However, Mac’s move was delayed in mid-March by California’s safer at home order.

Though he was a betting man, having played poker professionally in tournaments, on tour and on cruise ships, Mac deemed staying in LA an unsafe bet. He and his girlfriend grabbed their dogs and headed to a rural area in Missouri outside of Kansas City.

“We crossed the Nevada border at 11:59 p.m. the day of the shutdown,” Mac says. Though he returned to LA temporarily for that GM position, he has since made Missouri his permanent home. “It’s a big culture shock, but now I’m building my vegetable gardens, working with livestock and getting ready for winter.” In addition to working his own land, Mac landed a new job as a chef for the CSA members of Moxie Farms where each week presents a new challenge.

“One week we have 200 pounds of cucumber or we need to make 100 family meals of braised pork or they have whole Cornish hens they need to get out of the way,” he says. “To be honest, it's kind of a dream job!” 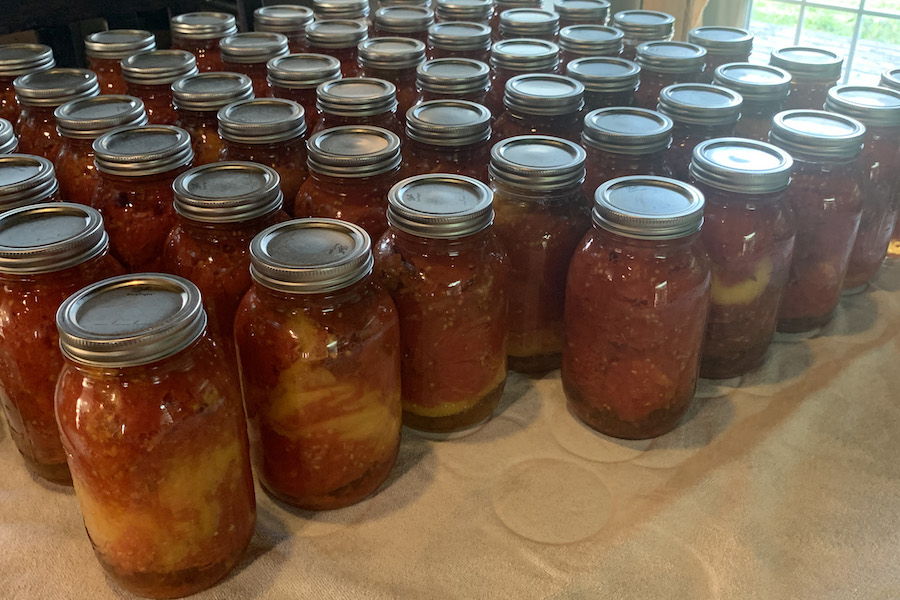 One week Mac used 250 pounds of heirlooms to go into a late summer gazpacho. Another week, he had 500 pounds of tomatoes to work with. “I canned them, the week before I made pulp and cooked it down into a tomato base, which I can use as sauce, soup or stew,” Mac explains.

Explore a career in plant-based cooking.

Mac worked on the line at Tallula’s with five team members — at Moxie he is the sole chef. He relies on his ICE education to make decisions and solve quandaries. “I balanced the pH, just like in culinary school, as I stuffed the tomatoes into jars,” he said, explaining how pH levels vary depending on the tomato’s color and represent acid levels.

Each Saturday, Mac receives a list of produce and protein that need to be used between Monday and Wednesday, the days he cooks. “Everything is scratch-made,” he says. “The eggs come to me warm. I make butter and cheese from the dairy cows, different sausages from the farm’s pigs, and I do a lot of canning, fermenting and pickling to prepare for winter.” On Fridays, the CSA members pick out what they want based on a point system that’s part of their annual membership. “I make meals based on the season and what we have in excess,” Mac explains.

Not only does farm life agree with his cooking style, it agrees with his lifestyle. Prior to enrolling at ICE, Mac had a stressful job for 15 years that negatively affected his health and led him down a path to high blood pressure. “I had a great package and 401K, and yet, it was killing me,” he says. “I was always working somewhere.” He got very ill and sought help from western and eastern medicine. “They determined I had mercury poisoning and a parasite that wrecked my gut health,” he says.

Mac went through the grueling process of getting all the metal out of his body, which included removing his fillings. “I also realized I had to go on a serious food journey to heal myself through food,” he says. He went on a diet and started a blog to document his journey throughout the three-year healing process, which resulted in leaving his stressful schedule behind.

“I didn’t plan to go to ICE when I quit my job,” he recalls. “I thought I would go to a resort in Mexico and relax.” Instead, he enrolled in night classes. “With the evening program at ICE, I could keep up with the food truck schedule, and I could hang out in the library and take advantage of all the extracurricular activities.”

Less than two years after graduating, Mac has become a chef with an amazing array of natural and organic ingredients at his fingertips and full control of his menu. “I get to make what I want,” he says. “I would never have the confidence, but with the things I learned at school, I don’t have to hunt down or research recipes. I know what I want to do.”

Looking back at his time at ICE, the former poker player shares this advice on risk taking:

“Always say ‘yes’ when a chef asks if you are up for a task. Who wants to be sous chef? I would always raise my hand, even if I didn’t feel prepared. It is the same in the restaurant world. Who wants to do the special tomorrow? You have to just go for it. You’re not going to learn anything if you don’t try. I remember when I learned to go for it, to raise my hand and be confident. I still make mistakes, but I also make amazing food that people like. It’s worth the risk or fear of failure.”

Go for it with ICE's career training programs in Los Angeles.

A Management Grad Brewing Success in the Coffee Industry