I was immersed in the world of canning for the first time as I indulged with eight other students in Chef Instructor Daniel Rosati’s Canning Workshop II recreational cooking class. 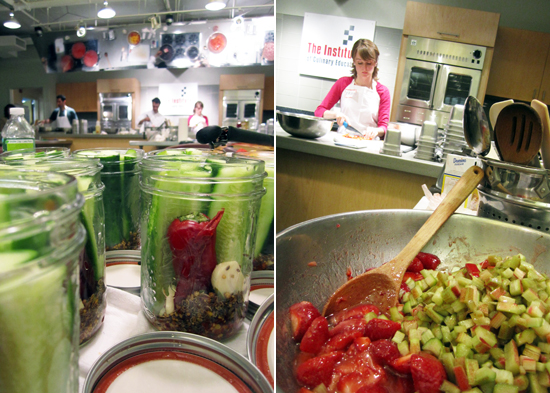 The recipes that Chef Daniel shared with us ranged from classic marinara sauce, to seriously “hot” pickles, blueberry compote and even eggplant caponata! Nearly half of the class was made up of returning students who had taken Chef Daniel’s other canning classes and raved about his recipes. One woman even gave up her ticket to the US Open for the chance to attend Chef Daniel’s second canning workshop! Being an avid tennis fan, this blew my mind, but definitely piqued my interest in the canning workshop and all that I was about to learn from Chef Daniel. Chef Daniel first recapped the basics of canning for us; he stressed the importance of making sure that each of your mason jars are not chipped around the glass lip, and that the metal screw-top and gaskets are smooth and dent-free. If these pieces are damaged, it will prohibit the vacuum seal process from happening and your canned goods will go bad. 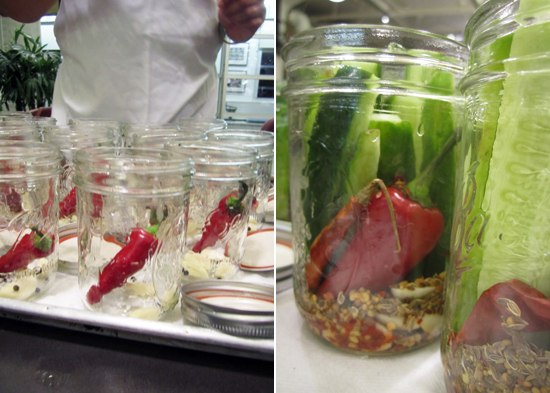 Next, he divulged some canning tips and tricks that make his recipes taste the best; for the classic marinara, Chef Daniel mentioned that in Italy the Chefs use San Marzano tomatoes because they “don’t have a lot of seeds, and seeds in a sauce create bitterness.” He also included the tip to use bottled lemon juice, especially while canning, because there is a specific percentage of acidity per measure versus a whole lemon, which is less precise. And a trick to speed up the cooking process while cooking 20lbs of tomatoes or more; simply roast the tomatoes in the oven before throwing them on the stove to break them down more quickly. The class was then divided into several groups as we began preparations for the canning recipes. I was dealt the task of prepping delicious strawberry-rhubarb preserves. The recipe is super easy – I’m a living testament to this.

Despite my lack of culinary background being such that I had never even handled rhubarb before and had to be instructed in the proper cutting method, my recipe came out tasting superb! Chef Rosati was very patient and helpful despite my amateur experience, explaining that the rhubarb was cut in a manner similar to celery stalks  — cutting off the ends, and then laying it on its flat side to slice in half, then quarters and finally chopping into cubes. After slicing up two and a half pounds of rhubarb, I dumped three cups of sugar on the top and stirred it up to sit while I halved two and a half pounds of strawberries. Chef Daniel explained that since I was preparing preserves, that I should only smush the strawberries a bit with my hands to maintaining the fibrous texture that separates preserves from sticky and gelatinous jams. When all was said and done, I had successfully whipped up a batch of strawberry-rhubarb preserves, which tasted lip-smacking good, and filled the kitchen with an aroma reminiscent of sweet cotton candy. 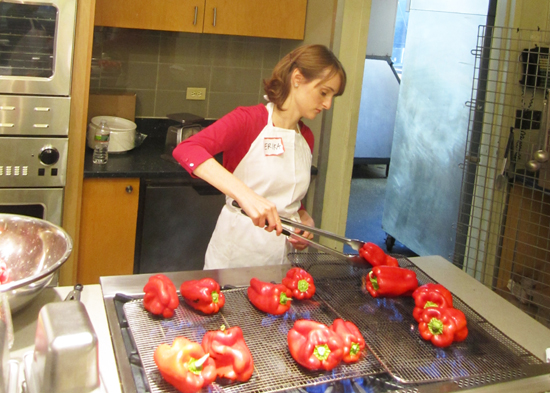 I was thrilled at how easy these recipes were to prepare, and have already replicated some of the recipes on my own since the class. The seriously “hot” pickle recipe looked so delicious that I couldn’t resist trying it on my own at home, so I heeded Chef Daniel’s advice and submerged the cucumbers in ice-cold water to ensure their crispiness. I also was sure to cut off the flower-end of the cucumber for crisp-pickles, because the enzymes it releases cause the pickle to soften — who knew?! In canning the pickles, I was shocked to learn that Chef Daniel didn’t even submerge the mason jars in boiling water to seal, instead he put them upside-down in the dishwasher (sans soap, of course) and ran three cycles with heat to vacuum seal the jars. “These recipes make perfect gifts for the holidays,” Chef Daniel said, and I am looking forward to using his recipes for holiday gifting this year. A delicious jar of roasted red peppers makes a great appetizer, while blueberry compote is delicious on vanilla ice cream or waffles. Now I can capture the flavor of the season in its prime with canning recipes I learned in Chef Daniel Rosati’s class. Yum!

For more info about upcoming classes on canning and preserving, check out the upcoming Old-Time Savory Canning and Donovan's Cellar Knows Pickles classes at ICE!