Picture a culinary school graduate and chances are you imagine a white-toque wearing chef on his or her way into a traditional restaurant setting. Most people wouldn’t think that culinary school could also lead to working in the test kitchen of a food media startup located in Brooklyn’s coolest new creative hub, Industry City. 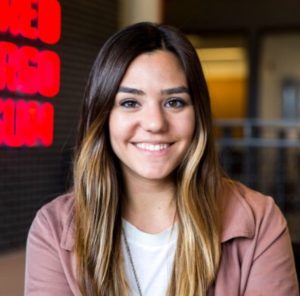 Taking a break from such adventures as making green eggs and ham for grownups, Jiselle hopped out of the test kitchen to complete the ICE alum questionnaire. Unsurprisingly, this ICE alum has strong views on culinary school and where to score the best breakfast sandwich.

I narrowed it down a lot obviously (laughs). One place is Steve’s Pork Store on Bath Avenue in Brooklyn. They make probably the best Italian sandwich I’ve ever had. And for breakfast—because obviously I have an opinion on breakfast—at the bagel shop I grew up with, Bagel Boy in Bay Ridge, they make a power bagel that has sunflower seeds, flaxseed and millet in a whole wheat bagel. I know a lot of people hate whole-wheat bagels, but this one is delicious. I get a sausage, egg and cheese with ketchup on that bagel and it’s a perfect breakfast sandwich.

Describe a typical day in your life.

There’s not a typical day, which keeps it interesting. At Extra Crispy, there’s a startup mentality—within a major company—but it’s still a startup. Most of us take on a lot of different roles so no two days are similar. Usually I’m either researching recipes at my desk; or I can be at a video shoot with a chef; or testing and styling in the kitchen. Tomorrow, I’m going to be making Scotch eggs with an ostrich egg on Facebook live. I have to pick up ostrich eggs at Union Square Market at 8:00 AM, so I’ll start here whenever I get back.

Where do you look for recipe inspiration? Food & Wine, Lucky Peach, Bon Appetit…I also read a bunch of food blogs. Or if I really like something I eat at a restaurant, I’ll try to recreate it. I research a bunch of recipes and then try to make something that’s my own. My family is also a big inspiration. Everyone in my family cooks, so I grew up trying to learn from them, though that’s mostly Italian food.

How did ICE prepare you for being a chef and food stylist at Extra Crispy?

I am where I am today because of ICE. If it weren’t for [ICE Career Services Advisor] Tessa, I never would have known about the internship with Time Inc. in Alabama. To be completely honest, I didn't even know this kind of job existed before attending ICE. Both programs definitely prepared me for working as a chef/food stylist. The Culinary Arts program provided me with the necessary technical skills and I gained an understanding of market trends in Culinary Management. The recreational classes were also a great way to build on a particular interest. 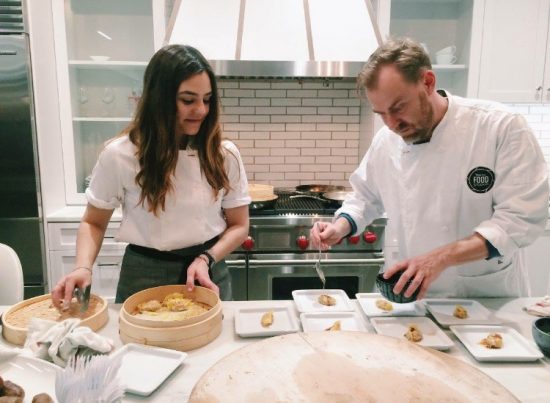 I’m still trying to figure that out. Right now I want to make delicious food that makes people feel good, or that brings back a memory or a specific moment in time. That’s why I like working for Extra Crispy—there’s so much comfort and emotion tied to breakfast.

Wired recently released a video with David Chang of Momofuku and in the video he talked about his success. He said a lot of things I love, but one thing in particular was that he tries to evoke nostalgia in his dishes, but not in an overtly obvious way. So the dish one person is brought back to won’t be the same dish that another person is being brought back to. I’d love to be able to do that but I have a lot more to learn.

It was always something I thought I wanted to do. When I graduated from high school, I thought I wanted to go to culinary school but I ended up going to college and getting a communications degree. I didn’t know where I wanted to go from there. At some point I realized that cooking had always followed me—no matter where I was, I was always finding a way to cook. Even in college I took cooking classes when they were offered. Eventually I realized that it was what I wanted to pursue as a career—something I always loved doing.

Where do you see yourself five years from now?

On my way toward starting something that will be my own. I don’t know if that will happen in five years because I need more restaurant experience first. So whether I’m back in kitchens or on the management side of things so I can learn how the FOH works, hopefully I’ll be on my way to owning my own restaurant.

Thoughts on the current culinary landscape?

The whole foodie culture thing is having an impact. People are either talking about things more than ever or social media is having an impact and brought to life how much people talk about it. People are more aware of their food; I’ve seen restaurants focusing more on where their food is coming from and I guess it’s in part because people are so much more concerned about the surrounding issues.

It’s also interesting how owners and chefs now look at how social media affects their restaurants. Nowadays a lot of people, before they set foot in your restaurant, will see if you have an Instagram and check out what your food looks like, which has a huge impact on whether someone will eat in your restaurant.

Click here to discover how you too can earn a double diploma from ICE in Culinary Management and Culinary Arts or Pastry Arts.