Behind the Scenes at elBulli

Last week, the gastronomy of Spain and its role in shaping worldwide culinary innovation, was celebrated in true style by none other than its highest practitioner, Chef Ferran Adrià. 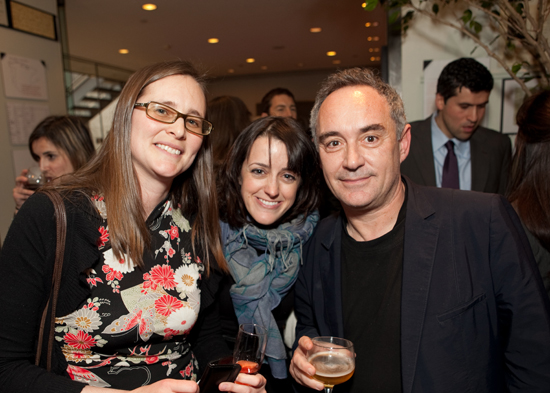 The event, which also served as a book launch for The Sorcerer's Apprentices: A Season in the Kitchen at elBulli, by Lisa Abend, was presented by ICEX (The Spanish Institute for Foreign Trade) at NYU’s King Juan Carlos I Center in Manhattan. The event kicked off with a speech by Miguel Sebastián, Spain’s Minister of Industry, Tourism and Commerce, on how Spain has shaped the world’s food culture. Lisa Abend then discussed her book, the daily life of elBulli interns (imagine pulling hundreds of individual pine nuts out of pinecones for the menu’s “risotto” course!), and what it means to hold a coveted stagiaire position at the world’s most renowned restaurant. (By the way, she noted that Adrià often says, a stage at his restaurant is even harder to secure than a reservation — over 3,000 candidates apply each year for around 32 unpaid six-month stage slots.)

Two former elBulli stagiaires, including ICE’s own Paras Shah (Culinary ’07), spoke about their time in the elBulli kitchen, and how it’s impacted both their career and the way they think about food, craft, and creativity in general. Finally, Adrià concluded the talk by sharing his unique approach to apprenticeship, as well as his exciting future plans for the elBulli Foundation, which will support the development and exchange of new innovations in the culinary arts, once the restaurant itself closes at the end of this season.

When the thought-provoking session ended, attendees enjoyed a wonderful reception highlighting the gastronomic delicacies of Spain. ICE Alumni Hall of Achievement alum, Katrin Naelapaa (Culinary ’91), Director of Wines from Spain, was also on-hand representing a range of wonderful wine producers. The reception offered a chance for many former elBulli and other ICEX Spanish stage scholars, including Marissa Masajo (Culinary ’06), who apprenticed at El Chaflan and Akelarre, to catch up and trade stories. It’s amazing to think of the far-reaching creative legacy of elBulli, and what those alumni, wherever they may be in the globe today, will be innovating and sharing with the world tomorrow.