We recap a virtual event on the significance of the staple.

Chef Roxana Jullapat of Los Angeles bakery Friends & Family shares the significance of healthy grains as a flour substitute, sustainable food source and so much more, as explored in her book, "Mother Grains."

If you’re not so sure how to incorporate sorghum or buckwheat into baked goods, turn to Chef Roxana Jullapat’s cookbook, “Mother Grains,” for a journey exploring eight ancient and versatile grains.

Chef Roxana, a proponent of heritage, spoke with ICE students about the versatility, sustainability and all-around significance of these nutritional grains during a virtual event from her East Hollywood bakery, Friends & Family.

In Los Angeles, Chef Roxana honed her craft working in acclaimed kitchens such as Campanile, Bastide, Lucques, AOC and Clarklewis before opening Cooks County in 2011 with Chef Daniel Mattern. Six years later, they’d open Friends & Family. “I had come into contact with enough grain available to me that I knew that it would influence, in a great way, the repertoire of what we would do in the bakery,” she explained. The sunny East Hollywood spot is known for artisan breads and pastries baked each day, featuring locally sourced, heirloom grains like einkorn. 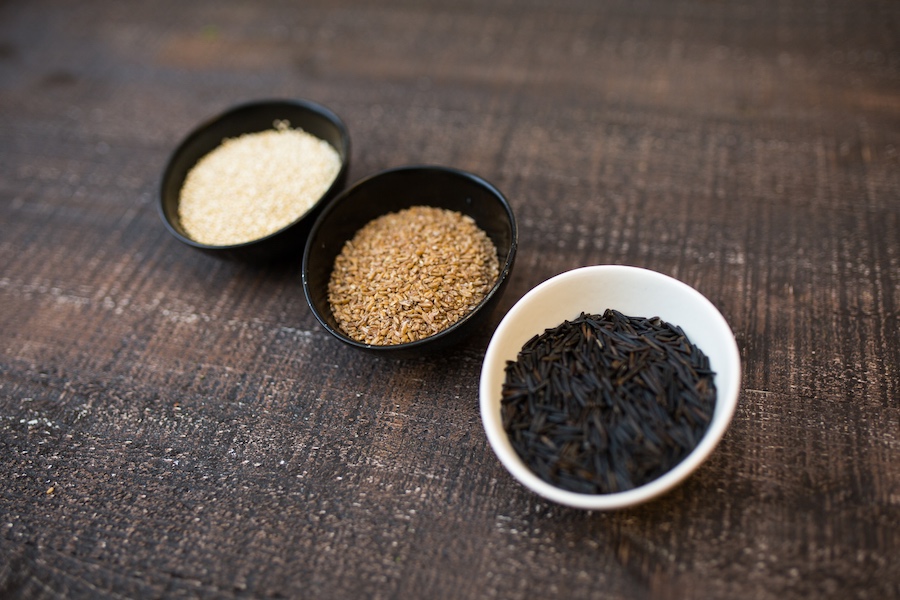 Chef Roxana picked the eight grains featured in the book — barley, buckwheat, corn, oats, rice, rye, sorghum and wheat — because of the importance each plays in reflecting people’s cultural heritage, acting as economic catalysts or as sustainable food sources.

“For example, here in Southern California, where we have a lack of water, a lot of grains are drought resistant, so they play an important role,” she explained. “What does it mean to have a food that can grow even in the most challenging of environments?”

These grains also have a rich and lengthy history. “When we think about wheat as a crop that was discovered and domesticated by Egyptians, people who actually built pyramids had these same grains,” she said. “We can trace these grains back all the way to the cradle of civilization ... That carries a lot of significance and is a very humbling process, too. It really underlines how it is important to preserve it for future generations.”

Read our Director of Nutrition's guide to grains.

It’s not only the grains’ significance that attracted Chef Roxana to use them in her recipes, it’s also the versatility and wonderful flavors. “I would try to let my imagination go crazy and say, ‘What would make this cookie great? Well, buckwheat would be magical here,’” she said, describing the process of converting recipes to incorporate heritage grains. “I started to fantasize and then put them into action.”

For Chef Roxana, buckwheat marries perfectly with chocolate. “Buckwheat is very assertive and to me almost earthy. It smells like soil drenched in rainwater,” she said. “Buckwheat is very polite and can totally take a backseat and let other flavors shine, and that’s definitely what happens with the chocolate.” She recommended trying buckwheat as a substitute for 50% of the flour called for in a chocolate chip cookie recipe. “You get the benefit of using wheat so your cookies won’t fall apart, but you have a really tasty cookie in addition.”

Chef Roxana believes Pastry & Baking Arts students, in particular, will be inspired by using mother grains in their recipes. “They should find it an interesting and fun challenge because we definitely have to put our thinking caps on, especially with the properties of each grain,” she said. For example, some grains are naturally gluten-free while others can act as binding agents, similar to flour. “It’s cool when people that have a little bit of food science background put their heads into grains. Really fun things start to happen,” she said.

In addition, Chef Roxana hopes that these wonderful grains become more accessible to everyone. “We can talk about all these delicious foods, but can we find them? Can we make this recipe?” she questioned. “By promoting the use of these grains, we are sending a strong message to the industry — and by industry, I mean the flour industry — that this is the flour we want to see in the world.”