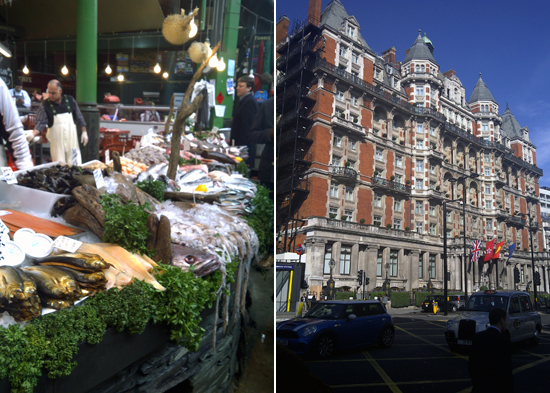 While ICE alum often end up working in some of the world’s top restaurants or using their skills to travel the world, Maria Tampakis is near and dear to our heart. As the daughter of Chef Instructor Michelle Tampakis, Maria has been around ICE since she was very young. After completing the Culinary Arts program, she has since gone on to work in some amazing kitchens and now she is working at Heston Blumenthal’s new venture, Dinner by Heston at the Mandarin Oriental Hyde Park in London. As the Chef de Partie at Dinner by Heston, Maria is working in the kitchen of one of the world’s top chefs. She draws on skills she hasn’t had much chance to use since culinary school such as butchery but also is learning whole new skills such as sous-vide. Maria said, “I know that the guys on my station are continuously working on always staying ahead of the game. Whether I am downstairs in the prep house, or upstairs in service, I am constantly trying to better myself by working faster, more organized and cleaner. It’s not hard to motivate yourself when you’re always happy where you are.”

Being part of the ICE family and having an award-winning pastry chef as a mother has helped Maria in her own career — “I am very fortunate to have a mother who not only is in the industry but who always pushed me just a little more when I refused to go any further.” Traveling with her mother to pastry and savory events around the world ever since she as a child, Maria has had the opportunity to meet chefs others only dream of meeting.

Even as a teenager, Maria knew she was destined for the food world. In high school, she worked at a local pizzeria, busing tables and only occasionally cooking. Every summer, she worked in hospitality related internship and during winter and summer holidays she traveled to places like Las Vegas, working for Paul Edwards at Chef Rubber. For Maria, taking the career training program at ICE was a chance to “cook all day long while I listened to older, more skilled chefs tell me about an experience they had, or a dish that was great, or the reasoning behind the importance of a roux. I was able to suck it all in.”  She had a special thank you for Chef Instructor Chris Gesualdi, saying, “He has been one of my biggest supporters and I cannot thank him enough. Chef Chris was the one who yelled at me to be creative and make my own dish in my spare time, when all I wanted to do was sit down. He was the one telling me about his weekend stints at restaurants where he worked 12 hours for free on his days off to learn from that chef. It is his desire to learn and continue to grow that I think about when I am feeling down.”

After working at Jean Georges for two years, Maria realized how much she had learned in just one restaurant and that it was time for a new challenge. After her boyfriend was offered a position as the Executive Sous Chef at Jean-Georges’s newest venture in Leicester Square — a Spice Market in a brand new W Hotel at the heart of the west end in London — Maria decided to travel with him and take on a whole new city. She said, “I absolutely LOVE London. The people here are so kind and everyone has been so helpful. I feel that the people in these kitchens cook because they truly love this industry. When you start your morning at 7:30 am and you know you will not stop before midnight, you have no choice but to love what you do. Five days later you’re physically drained, but still happy to go to work.”