The Accidental Cheesemaker at ICE

Yesterday, ICE students were treated to a talk and tasting with Angela Miller of Consider Bardwell Farm. Miller wrote Hay Fever: How Chasing a Dream on a Vermont Farm Changed My Life about her journey from literary agent to farmstead cheese maker.

The talk was lead by ICE Instructor Alexandra Leaf who asked Miller about her experience on the farm and guided the students through five different Consider Bardwell cheeses. Miller was a successful literary agent, counting Mark Bittman, Amy Scherber, Sarabeth Levine and Max McCalman among the authors she worked with. Shortly after her and her husband bought a 300-acre farm in Vermont, they began keeping goats. Now, their award-winning cheeses can be found at farmers’ markets, specialty cheese shops and some of the city’s finest restaurants, including Jean Georges and Daniel. In November, three Consider Bardwell cheese won awards at the prestigious World Cheese Awards. 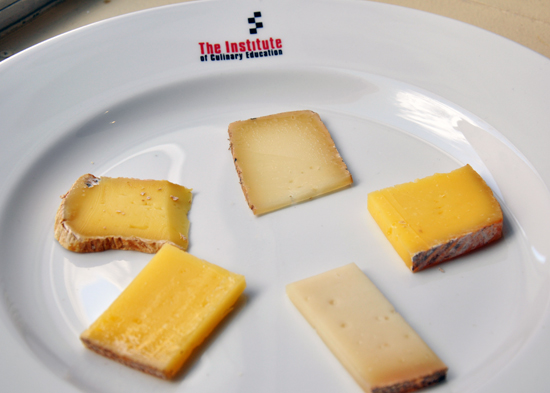 Consider Bardwell’s awards are all the more amazing considering that Miller started with no experience. Shortly after buying the farm, Miller and her husband learned that farm had been Vermont’s first co-op cheesemaking farm in the 1880s and they decided to give it a try. She started with six Oberhaslis goats from New Hampshire. “I brought them to Vermont in a rented van! I didn’t even know it was illegal to cross state lines without a vet’s certificate.” Now, they have 100 goats, and also source milk from local Jersey cows.

From the get go, they had the help of experienced cheesemaker Peter Dixon who helped them develop a product line ranging from a simple chevre to aged, hard cheeses. Yesterday, ICE students sampled two goat’s milk cheeses and three cow’s milk cheeses, all made with different methods and techniques giving each a unique flavor and texture. Miller also talked about the challenges of owning a farm, and how she learned you have to look at the bigger picture. Every year, after the goats are born, Miller measures and tests the milk, deciding which goats to keep and which to sell. “You can’t milk boy goats, and well, they aren’t going to a spa.”

Heritage Foods has created a program called “No Goat Left Behind,” to help make humanely-raising these male goats profitable. Miller says that the Heritage Meats program helps them sell at top-prices to restaurants in New York and San Francisco rather than selling the meat at rock-bottom prices. The farm has only made enough money to break even in the past two years, but for Miller it has all been worth it. She said, “I love making good food.”