Gianna Stanley (Culinary, ‘19), Joy Cho (Pastry, ‘19) and Ben Just (Culinary, ‘19) began their culinary careers in some of the country’s most illustrious, acclaimed restaurants. While their stories are different, they can all agree on the value of their ICE education and training at Michelin-starred restaurants.

Before Gianna went to culinary school, she graduated from Boston University with a Bachelor’s degree in marketing and statistics. She spent about four years working in marketing before she started to feel burnt out and unexcited about her career. Gianna quit her job without a plan and spent time volunteering in a shelter kitchen that served the homeless and underprivileged. “I’ve never been a morning person, but I was so excited to get up at 6 a.m. and work in a kitchen,” she explained. “I love to cook and I love to feed people. It brings me so much joy. I found out what I needed to do to apply to ICE, and I moved to New York shortly thereafter.”

Immediately upon starting her first module, Gianna knew she had chosen the right path. “While ICE definitely gave me all the fundamental skills, I especially value how much they pushed us to get out of our comfort zone of the classroom setting and volunteer. ICE is really a stepping stone so much for connections and meeting people,” she said. Gianna took advantage of the abundant opportunities to work with elite chefs and cooked nine dinners at the James Beard House.

One of Gianna’s most formative moments at ICE was when Chef Frank Proto taught her class about sustainability. “Learning about how unsustainable our food systems are now really sparked this interest in me to further my education in that regard, especially in cooking with vegetables,” she said. Gianna wanted to dive deeper into the world of growing, farming and preparing vegetables in a thoughtful way. This is what led her to pursue an externship at Blue Hill.

“Chef Dan is really a visionary in what he does,” Gianna gushed. “One of the coolest parts about being a cook at Blue Hill is that we got to have weekly meetings with the chef de cuisine, where he told us the reasoning behind why we were doing what we were doing.”

In her three months at Blue Hill, Gianna learned more than she ever could have imagined. The experience was intense but worth it. “With a Michelin-starred restaurant, when they recruit you, they really trust you and give you that responsibility. I also felt super supported. Having all of that very early in my career definitely set me up for success,” Gianna admitted.

Though she was offered a full-time position at Blue Hill, Gianna chose to accept a private chef job for a family with two young children. “It’s actually a really interesting challenge because they have the same standards that Blue Hill did,” said Gianna of her clients. “They’re very ethical about their sourcing and what kinds of foods they put in their body.” Gianna is using the base knowledge she developed at ICE, combined with her hands-on education from Blue Hill to create vegetable-focused, dairy-free and gluten-free meals. She also works as a chef with a pop-up event company called The Underground Kitchen.

Through all of Gianna’s successes, it’s the people that matter most. “I still rely so heavily on the people that I worked with at ICE,” she said. “We have a group chat where we talk about all of our questions and things we need to bounce off each other. Creating that network was so rewarding. It’s a really unique bond and I’m so appreciative that ICE gave me some of my best friends. I love my station team.”

See what Gianna’s working on while staying home @alwaysbhungry. 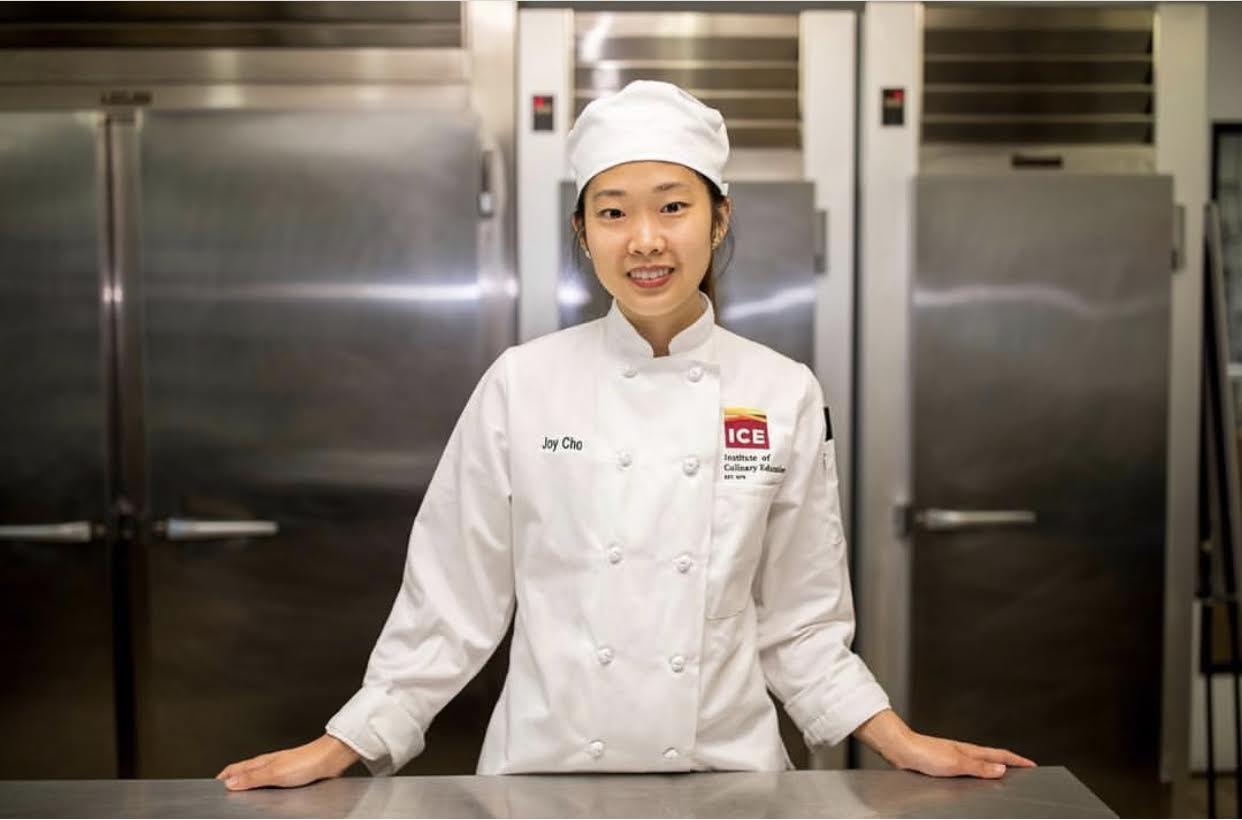 Joy Cho also earned a bachelor’s degree before pivoting to pastry. First, she studied political science at the University of Chicago and worked in state government and communications.

“I'd always been passionate about food, hospitality and baking, but I wanted to take it to the next level by potentially making it a career,” Joy explained. “ICE offered an evening pastry school track, which allowed me to keep working my office job while exploring if pastry was the right fit for me job-wise.”

Joy describes the breadth and depth of her ICE education. “My career advisor was extremely helpful in connecting me to the right people and restaurants, and my classmates were a constant source of inspiration,” she said.

Joy externed at Oxalis, a Michelin-starred neighborhood bistro in Brooklyn, where she worked directly with the pastry chef on production and service. This three-month experience, combined with her time at ICE and passion for baking, convinced Joy to leave her office job and become a full-time pastry cook. “I love being able to create something beautiful and delicious out of a diverse array of ingredients, and to make someone's day or occasion a bit brighter and more memorable through pastry,” she said. “I'm drawn to precision, but also the room to be creative, and I think pastry affords a balanced mix of both.” Her sweet tooth doesn’t hurt, either.

After she completed her externship, Joy secured a role as a pastry cook at Gramercy Tavern, where she worked the evening service for about seven months before the COVID-19 shutdown. Arriving at the restaurant around 4 p.m. each day, Joy took inventory and prepped accordingly, which means she could be whipping creams or baking off cakes.

“It's really important to make sure I set my station well and have enough of everything before service begins. During service, I'm plating desserts as tickets are fired and passing on the plates to my colleague who completes them with ice creams and other garnishes,” she explained. In between service rushes, Joy works on side projects like scooping and rolling truffles or dehydrating fruit chips. Her day is done sometime between midnight and 1:30 a.m.

“Gramercy Tavern is such a special place,” Joy raved. “While there are many things I love about it, the learning culture stands out. People are always willing to teach and help you if only you ask! That's huge. I was also drawn to Chef Miro [Uskokovic]’s unique brand of desserts, which are innovative, interesting and elegant without feeling too stuffy and rigid.”

According to Joy, the culture defines the restaurant. Employees, including herself, are proud to work at such a respected institution that continues to deliver superb service and intentional food. “I like feeling part of a bigger team that is working towards a common goal,” Joy said.

In addition to her full-time gig, Joy recently launched a pop-up supper series called Family Meal. For her first edition, she made individual milk and honey spelt cakes filled with a coffee cream and topped with homemade misugaru ice cream, toasted pecans and Maldon sea salt. “Misugaru is a Korean multi-grain powder with a nutty flavor profile,” Joy explained. “I've been trying to incorporate it into more of my dishes, and the ice cream was a hit!”

Whether Joy is baking at Gramercy Tavern or a pop-up, there are culinary school lessons she keeps with her. “Patience and precision are key, but also the very necessary reminder that at the end of the day, pastry should be FUN and is a one-of-a-kind way of delivering joy to your audience.” 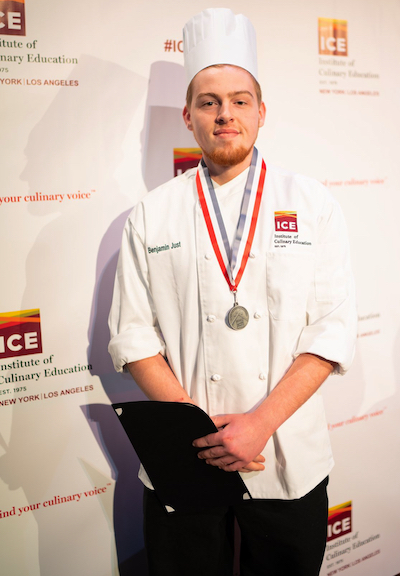 After completing Culinary Arts classes, Ben externed with Pastry & Baking Arts Chef-Instructor Alex Orman, cooking brunch at his Brooklyn restaurant, Encore. Ben asked ICE career services to help him secure a trail at Per Se and submitted his resume. “ICE has helped me a ton through this entire process!” Ben exclaimed. “Chef Barry Tonkinson was the first person to tell me that I should try to work at a Michelin-starred restaurant. He mentored me on what to expect and gave me tips on ways to be more efficient during my stage.”

Soon after the trail, Ben was offered a butcher’s assistant position. “I knew working in a Michelin-starred restaurant would teach me standards for how things should be done, as well as techniques and knowledge that will live with me forever. I'm very grateful Per Se gave me a chance to learn its ways,” he said.

For about six months before the shutdown, Ben worked his way up and was promoted to fish butcher. His day typically began with shucking and trimming oysters for Chef Thomas Keller's famous oyster and pearls dish. After that, he filleted fish, broke down shellfish or made stocks. “I love going to work everyday because of the amazing people I interact with, the exciting new skills I learn and the amazing ingredients I get to work with. I love being around people who push me to be better everyday because that little extra push makes a big difference,” Ben said enthusiastically. He feels that his job has refined his skills, taught him finesse and sharpened his attention to detail.

Ben admits that working in a Michelin-starred restaurant can be overwhelming and stressful at times due to the responsibility that comes with being awarded three stars. The standards of perfection are the highest in the industry. The knowledge he gained from specific ICE classes like butchering, knife skills and plating help Ben succeed daily.

“I'm very grateful for what the school has done for me and connections I've made through its community," he said. “I'm not quite sure what is after Per Se, but wherever I go, I'm confident that working at Per Se will prepare me for anything.”

This makes so excited to one…

This makes so excited to one day maybe go here and start my culinary career from ice. Thank you for the content