What Chefs Can Learn From Farming Themselves

In this interview, ICE’s Director of Sustainability Bill Telepan speaks with Chef Evan Hanczor, owner of Williamsburg's acclaimed brunch spot, Egg. Bill and Evan talk about Goatfell Farm, two acres of fertile Catskills land that founder and co-chef of Egg George Weld purchased to yield key produce and ingredients for the restaurant a decade ago. Since then, the duo has learned a tremendous amount about maintaining a successful farm-to-table operation.

Bill and Evan chat about the conundrum of what comes first: the produce or the menu, as well as the potential edge that agricultural knowledge affords up-and-coming chefs. 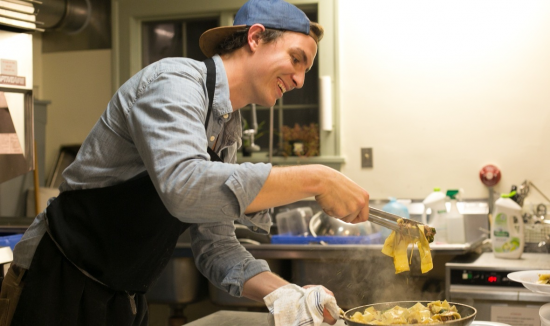 Bill: When did you first start farming for Egg?

Evan: George and his wife Jennifer bought it a year or two after Egg opened, and started to develop it into a place where it grew produce for the restaurant. This is about the tenth year, and it's been a really strong year for us.

George is up there [on the farm] most weekends with his family, but we have a hired farmer as well — our third since the farm has been in operation. In the past we've had folks with a background and interest in farming who transitioned from working in the restaurant with us to running [the farm].

Has it always yielded a successful harvest?

In the beginning, we didn't produce much. One year we tried to farm it by committee — which didn't work out very well. It seemed like most years we were trying to grow as much food as we could, and not looking ahead to how that would affect the next two or five years — which is how you really need to think about farming.

Then leading up to this past year we were busy with a number of projects at the restaurant, in addition to opening a space in Tokyo, so we made the decision to grow just a couple of things and more or less let the farm lie fallow for a year. We hired a farmer and made a plan towards long-term production.

This year we have a full-time farmer named Chuck who has a bunch of experience in different kinds of farming. He really knows how to plot a field. He's had quick rotations and set down beautiful produce even though he got a late start this year. It's been super productive — especially over the past two months. 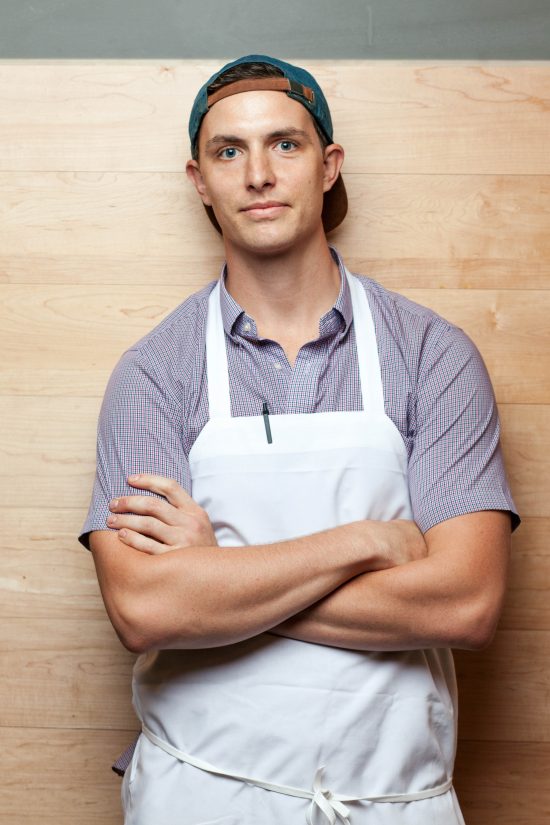 Do you grow exclusively for the restaurant?

We were really overwhelmed with tomatoes in the past two months, so we were calling people up to see if they would take them, giving them out to guests and friends. But otherwise, all of the produce comes into the restaurant, and we find ways to work with it.

When we're doing it well, the idea is to have good communication and planning in advance between the restaurant and the farm so that we can get things that we might want — but also knowing what makes sense to plant based on the soil, what was being grown before, how much labor it will take and how much time the farmer has.

Did you grow up with any farming experience?

Not really. I lived in central Florida until I was about 10 and I do remember visiting a farm. When my family moved to Connecticut we lived near a small dairy farm and educational center that grew some produce — it was where we would get our milk and eggs.

There were a few other small farms in the area, so I was exposed to a farm and some of the cycles of it, but I didn't have any experience working on one or understanding what really went into running one. T

he only sort of vegetable production experience I had at the time was some raised backyard gardening that started with my parents at their house in 2008. We put in a couple of beds, so I had a few years of trying to grow stuff in the backyard, but certainly not on the scale of even a small farm. Ours is six acres total, but we only grow on an acre, maybe an acre and a half — which is productive, if you do it right.

Do you ever spend time on the farm?

This year I haven't really, but in years past I've tried to go up every month or so. It's nice to get out of the city and be in a different environment, and it feels good to do some work.

I also try to get staff up there whenever possible. If a few employees have days off together and want to figure out a way to get up there, or if one of us is heading up we'll get a server or two up to the farm and they'll be able to get their hands in the ground and see the process.

That was always one of the goals for us. We didn't really know what we were doing or how to operate a farm in a way that made any economic sense for a restaurant, so we really wanted to learn and get the firsthand experiences of the challenges. When we go there with the staff they can see that when a farmer calls and says they're out of something that they were expecting and they're frustrated, this is why. It gives both parties more empathy and understanding, and it can make you a better and more creative cook.

Going into this with a farmer, how are you going to choose what to grow?

We thought we had a good understanding of what grew well after doing it for quite a few years. It turns out we were wrong about a few things. We thought we could never get cabbage or fennel to grow, but our farmer figured out how to get it to grow really beautifully, so we're still learning about the soil.

We had an idea in the beginning of the season that we'd love to have eggplant and kale. We go through so much kale at the restaurant, and if we could grow the bulk of what we use for a few months that could be really cool.

But in addition to what we want to have, we also have to ask what makes sense. If you're growing these ten things at the same time, what gives you enough time to do your harvest? What makes sense from a labor perspective? It doesn't make sense to grow things that are super labor intensive or time specific, so we're figuring out a middle ground but also responding to what is reasonable. Hopefully as the years go on we'll continue to learn what grows well in certain parts of the field, and how to better adjust and respond to that.

Do you think chefs should learn about farming and what it takes to grow something?

I do think it gives you certain advantages and deepens your understanding of products, especially if you're looking to work in a certain region and express particular qualities, rhythms or ideas of that area. If you're cooking locally, understanding what farmers are dealing with and also having a good sense of what you're going to have at certain times of year, when things are going to be at their peak and how to plan your menu that way can be helpful.

I get to see ingredients at so many different stages of their development, and that often gives me new ideas about how I might use them or what parts of the plant I might use. A lot of people don't know about nasturtium pods. They know the flowers and may know the leaves are useable, but don't know that third use you can get out of the plant: nasturtium capers, which we harvested our first batch of last week. You're exposed to really cool stuff when you learn about the farming process.

Interested in culinary training with an eye toward sustainability? Learn more about ICE’s career training programs.