“As Minimum Wages Rise, Restaurants Say No to Tips, Yes to Higher Prices,” reads the New York Times headline. I experienced this seismic change firsthand on a trip to St. Louis. My son and I stopped for an impromptu lunch at a very modest neighborhood café (see: worn upholstery, paper menus and general shabby charm). Only two other tables were occupied during prime lunch service, and one look at the extravagant menu prices had me wondering if we were in for a taste of highway robbery.

I ran down my typical checklist. Was the restaurant an alum of Diners, Drive-Ins and Dives? Was it a farm-to-table, locally sourced, organic, natural, gluten-free, green, Slow Foods-endorsed, celebrity chef-fueled find? Nope. None of the above.

Discomfort swelled inside me like a cheese soufflé rising in a too-small cup. Finally, I saw a small note between the burger of the day and the Caesar salad stating, “all prices include basic gratuity.” Even with this knowledge in hand, my son—a generous tipper, but business minded—struggled to digest the high prices. I tried to explain that we would likely pay the same in the end, but then, I couldn’t quite be sure.

My consultant mind started poking holes in that argument: Was this just another crafty restaurant gimmick? Who would benefit from the extra money? What do the words “basic gratuity” even mean? Am I still supposed to leave a few dollars extra on top of the charge, or am I cheap if I don’t? And finally, what if I hadn’t seen the discreet menu note about tip included and left my usual 20%?

Suddenly, a simple meal had turned into a complex puzzle. Is this the dawn of a new restaurant reality? It’s not a simple answer. With new laws promoting wage hikes—ultimately up to $15.00/hr. or more—restaurants are shouldering an incredible spike in operation costs.

At the same time, states are doing away with the tip credit. That’s the loophole in the minimum wage system that permits tipped employees to receive hourly pay that is only a small percentage of the minimum wage because the balance is made up by tip income.

Put simply, these two reforms mean that waitstaff will be paid a straight hourly rate based on the new minimum wage. Sure, this protects workers from the occasional slow shift, but it may ultimately result in lower overall income. Eliminating tips and instituting a flat hourly pay rate also marks the end of the historic wage gap between lower paid kitchen workers and higher paid waitstaff.

Just thinking about this, I’m already sweating. Will the strategy to eliminate tipping work? At present, Seattle has been the most visible test case for these new initiatives. For several months now, restaurant operators have tried different strategies—increasing menu prices, eliminating tipping, including a compulsory labor or service charge in the bill. Some have even tried adding an administrative fee.

Clearly there is no one solution. In the end, it’s customers who will be footing the bill. What’s more, these reforms will trickle down and affect every business that utilizes low-cost labor, from retail to health care and beyond. So how are things going in Seattle? Well, it’s still early, and the full $15 wage is yet to come. Many operators are waiting to make changes until they see how others fare.

But some marginally successful restaurants have already tanked. Labor costs that were 30–33% of sales are now more than 40%, devouring most or all the profit. To cope, some owners are considering shorter hours or reducing staff. A few plan to mechanize and cut jobs. As for the guests, some refuse to pay the additional charges. Remember, perception in the restaurant business is huge.

If something looks expensive to a diner, it is expensive. No thoughtfully worded explanation can overcome the emotion of high cost. Even I—an educated industry expert—succumbed to shock and confusion at that café in St. Louis. Some more successful and well-run restaurants are making it work, largely because they absorb part of the increased costs while guests pick up the rest via new menu prices. 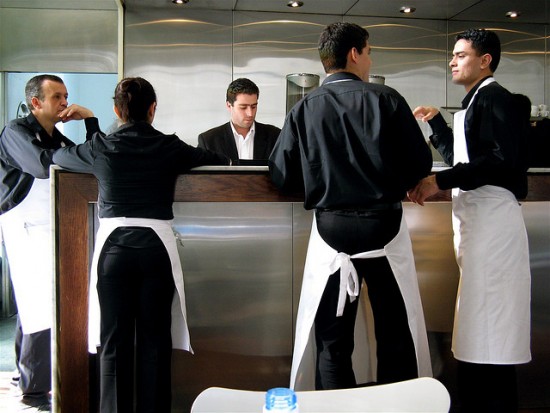 In the long term, I’m curious to see if those who benefit from higher wages will actually take more money home. They may just see those wages eaten up by the higher prices of the very products they produce—and those they buy themselves. For when they go out to eat, they too will spend more.

As the old saying goes—a rising tide lifts all boats. Personally, I’m also curious to see if the owners of those boats end up with enough money to gas up and go for a joy ride. For now, the jury’s out, but I’ll be keeping a watchful eye on the situation. The buying power of a $15.00 minimum wage population may help the overall economy, and it would be terrific if everyone made a living wage.

Widespread reform is no substitute for opportunity, ambition and growth. Maybe this is just a transitional phase. Maybe consumers like my son and I will get used to the sticker shock—that is, until the next government initiative turns the industry upside down.

Eager to master the business side of the food industry? Click here to learn how you can study with Steve and other leading restaurant consultants at ICE.