Thanksgiving—arguably the biggest day of the year for home-cooked meals—is fast approaching, and aspiring home chefs will find themselves in the spotlight yet again. To provide the adventurous cooks among us with some culinary inspiration, ICE invited Master Butcher Rudi Weid to demonstrate the infamous turducken. 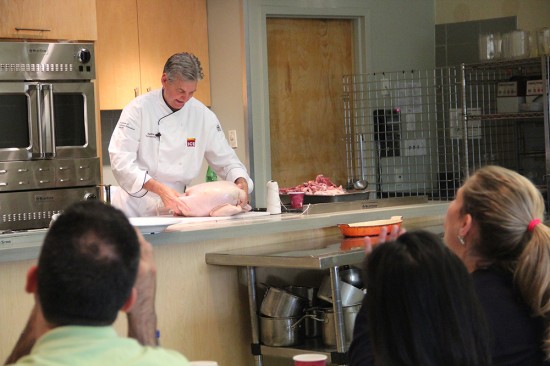 If you are unfamiliar with the term, a turducken is a deboned chicken stuffed into a deboned duck, which is then stuffed into a partially deboned turkey. Each layer is traditionally separated with stuffing or sausage, creating a layered effect when the bird is sliced after roasting. Culinary students may recognize similarities between a turducken and a ballotine, a deboned poultry leg that is stuffed and rolled.

With its roots in Roman and French royal courts, as well as 18th century England, the practice of engastration (a method of cooking which involves stuffing the flesh of one animal into that of another animal) is virtually absent in modern American cooking. The Turducken was popularized in America by legendary New Orleans Chef, Paul Prudhomme, and brought into the lexicon by football announcer and turducken enthusiast John Madden during popular Thanksgiving day games. 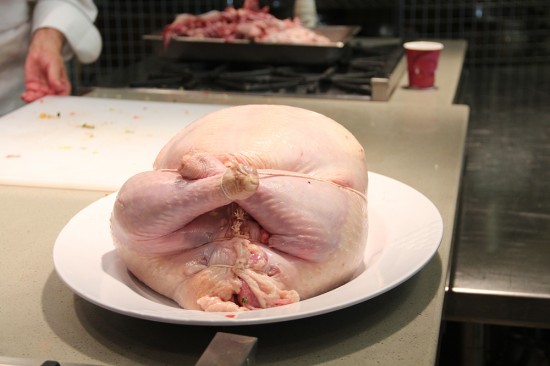 If you're game to impress your guests with this famous Thanksgiving centerpiece, here are a few pieces of advice from Rudi on assembling a proper Turducken:

Give yourself plenty of time to prep ahead

A butcher with decades of experience can make deboning whole birds look like a snap, but if it’s your first time, it will likely be a slow process. Make a three-day plan leading up to Thanksgiving. On day one, debone the two smaller birds. On day two, debone the turkey and make the stuffing. Finally, the day before Thanksgiving, assemble the turducken so it's ready to roast the following day.

Since a rip in the outer bird's skin will cause the contents to spill out, and a missed bone could leave a guest with quite an unpleasant experience, precision is key. Start by deboning the chicken, as this is the most central bird in the Turducken. If there is a rip or mistake, it won’t be visible in the end product. The turkey is most important, as it's the outer-most bird, so leave that for last—when you’ve had some practice on your first two birds.

As with all poultry, smaller is better.

For the chicken and the duck, it’s a matter of size—they all have to fit inside the turkey! As for the turkey—it’s a matter of the overall quality and the size of the bird. Huge, twenty pound birds are extremely difficult to cook. Certain parts will be done cooking long before others, leaving some areas dry and others moist. Further, smaller birds have a better skin-to-meat ratio, meaning none of your guests will have to go without. Remember—the fatty skin acts as a natural baste for the turkey. Huge birds have pretty much the same amount of skin for significantly more meat, meaning you run the risk of a dried out bird.

You’re cooking three different stuffed birds at once, so contamination is a real concern. You want the most central part of the stuffing to reach 155-160 degrees before removing from the oven. Additionally, since the skin of the internal birds is still on, you want to give your Turducken enough time to render out most of that fat and moisten the stuffing.  If you don’t allow for that time, you will be left with a chewy lawyer of poultry skin, which most people find unpleasant. 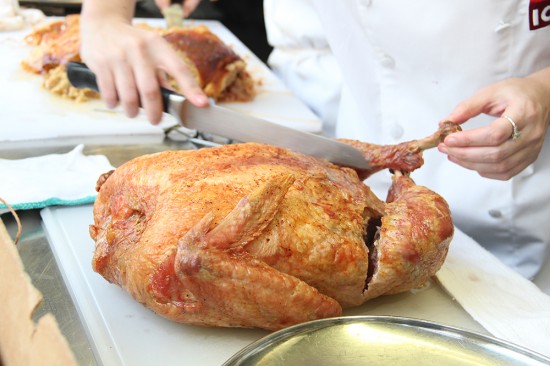 While turduckens certainly require a lot of work and forethought, they are well worth it. The cooking process helps you master essential culinary techniques, and the end result is sure to impress even the most discerning guest. I hope some of you are inspired to take the plunge—it's sure to be a Thanksgiving to remember!