The Scoop: Getting to Know Ice Cream

Everything you ever wanted to know about the frozen dessert

Just days into official summer, we’ve already had some sweltering temperatures in NYC, and all I can think about are frozen desserts. Ice cream, gelato, sherbet, soft serve, sorbet … there is an explosion of frozen options available in my neighborhood — from a Häagen-Dazs pint at the corner store and pretzel waffle cones piled with Blue Marble fresh mint ice cream to homemade gelato from old-school Italian sweet shops. 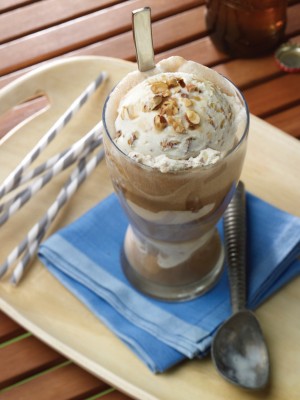 The popularity of frozen treats is nothing new in the U.S., and is certainly not specific to New York. We are in the midst of a “frozen renaissance,” so here's a few scoops of history and science to inform your ice cream adventures this summer.

President George Washington spent about $200 for ice cream in the summer of 1790, according to the records of a shopkeeper in Manhattan. Today, that would be equivalent to about $5,000 in ice cream purchases.

President Thomas Jefferson loved ice cream so much that he adapted recipes brought back from France for ice cream, one of which is said to have been an 18-step procedure for something similar to a Baked Alaska. His personal recipe for vanilla ice cream is even in the Library of Congress!

Do you think Washington and Jefferson would rise from the grave for a scoop of Chocolate-Chile from NYC’s il Laboratorio del Gelato? I do.

What is the difference between ice cream and gelato?

Speaking of il Laboratorio, on a recent visit to the shop with my ICE pastry students—which involved sampling 16 different flavors of gelato—the topic of the difference between gelato and ice cream came up. Many of us think gelato is just the Italian word for ice cream—and it is, but it’s also much more. Gelato may have a richer texture than standard ice cream, but that’s actually not because it has richer ingredients. Rather than cream and egg yolks, it’s made with regular old milk.

That doesn’t seem to make a lot of sense until you consider what happens to gelato during the churning process. I like to use the reference of a glass of milk versus a bowl of whipped cream. When you blow bubbles in a glass of milk, they pop fairly quickly.

However, whipped cream holds its light and fluffy shape for hours at a time. It’s the fat in cream that allows it to hold air, as compared with the lack of fat in milk. In short, when a gelato base is churned, it doesn’t have much air whipped into it. This gives it a very dense texture, which has a richer mouth feel.

American ice cream, on the other hand, is usually made with more cream than milk. Because of the higher fat content, up to 50% of the volume of ice cream consists of air that has been churned into it. (Think about that when you purchase your next scoop of ice cream—50% of what you’re buying is air.)

The air whipped into gelato or ice cream is called the overrun. Gelato has almost no overrun and ice cream can have up to 100% overrun. Yet despite the economic benefits of selling ice cream, many chefs—like me—prefer gelato. But that doesn’t mean it’s more popular with the masses.

Just take a quick look in the ice cream aisle of your grocery store and tell me just how many more types of ice cream you’ll find than flavors of gelato. Because gelato has less fat than ice cream, the flavors of gelato are typically stronger. When fat coats the tongue, it interferes with your taste buds’ ability to truly taste the flavor of your ice cream. So, as a chef, if I want to add a bold punch of flavor, gelato is a great vehicle.

Additionally, gelato is traditionally made with natural ingredients like fresh strawberry puree, whereas strawberry ice cream is often made with a combination of artificial strawberry flavor and real strawberries. 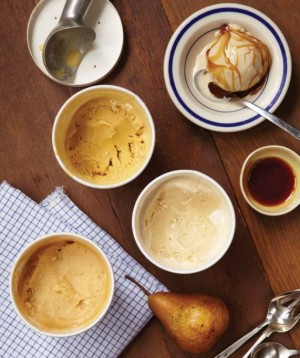 What about the different styles of American ice cream?

Have you ever looked closely at the label on your favorite ice cream? U.S. law classifies ice creams by their percentage of milk fat content.

Super Premium has the most fat—between 14% and 18% and can have as low as 20% overrun. This is because it is traditionally made with more cream or in the French style of ice cream—custard made with egg yolks. You’re most likely to find this style in small, handmade batches at a local ice cream shop or a high-end restaurant.

Premium usually has 11% to 15% fat and around 60% to 90% overrun. Examples of premium ice cream are the more expensive gourmet or specialty pints found in your grocery store. (By the way, the pint, quart or gallon-sized containers of ice cream are called “hard-packed” ice cream.)

Regular ice cream is much less dense. It has 10% to 11% fat and a lot more air, upwards of 90% to 100% overrun. These are the basic flavors made by larger manufacturers, such as chocolate, vanilla, strawberry and mint chocolate chip.

Economy contains exactly 10% fat, which is the minimum USDA standard, and has 95% to 100% overrun. Anything with less than 10% fat cannot be considered ice cream, without being labeled “light.” Essentially, this is the least expensive variety of ice cream available, and I wouldn’t recommend eating too much of it.

And as for frozen custard, Philly-style and soft serve…?

Frozen custard, sometimes called French-style ice cream, is made of a cooked custard base that incorporates eggs. It is significantly richer than ice creams made without eggs, which is also reflected in its premium price.

Philadelphia-style ice cream is made without eggs, which is the standard or regular ice cream in certain regions of the U.S.

Soft serve is molecularly similar to regular ice cream, but is served at a higher temperature that allows it to be extruded into a soft swirl, and gives is a lighter, softer texture. Soft serve also has a lower fat content but a much higher overrun, which also attributes to its super light and creamy texture. Fun fact: its warmer temperature actually allows your taste buds to taste the ice cream better. 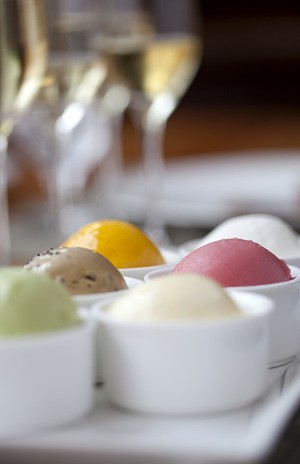 So Where Do Sherbet and Sorbet Come In?

Sorbet is made from water and fruit puree or juice. It contains no milk, cream or eggs, and is one of the oldest forms of frozen desserts known. Records of frozen sorbet-like desserts date back to the ancient Romans and Chinese, where they were made with snow, fresh fruit pulp and sweetened with honey.

Sherbet is not quite ice cream and not quite sorbet. It is made with fruit and water, but also has the addition of dairy—usually milk or buttermilk. This gives it a slightly creamier texture than sorbet, as well as a lighter, pastel color. By law, sherbet must have less than 2% fat in it.

Let’s Not Forget About Frozen Yogurt

With shops found all over the country, frozen yogurt is the U.S.’s extremely popular attempt at making ice cream healthier. However, the marketing is quite misleading. While yogurt is certainly healthier than cream, the sweeteners added to frozen yogurt often cancel out the health benefits.

Not to mention that the healthy bacteria found in yogurt is killed when frozen, so there goes those probiotic benefits. One item worth noting is that yogurt has a higher freezing and melting point than milk. So on an extremely hot day, that yogurt will melt very quickly!