Last May Nick Malgieri, ICE’s Director of Pastry and Baking Arts and author of Perfect Cakes, A Baker’s Tour and many others, traveled to Turkey to learn about Turkish pastries from experts in Istanbul and Gaziantep. He brought these traditions back to the states and recently shared them during a demonstration at ICE.

During the demo, Chef Malgieri demonstrated multiple types of savory pastries made from yufka, an ancient Turkish version of phyllo dough that is rolled as opposed to stretched. To begin, we watched original footage of Turks in action, including clips from a “modern” factory that makes sheets of dough for baklava and other delicacies. 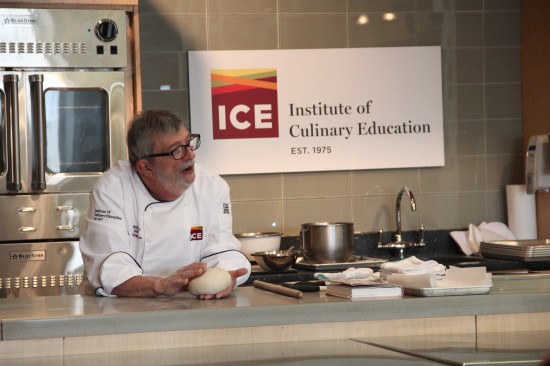 In the video, Antep Katmar, a true expert, mixes and rolls the yufka dough by hand. Palms up, palms down, rolling the dough around in a circle, alternating his angles at 30 degrees as he does each roll to get it wafer-thin. With well-oiled hands and metal rod, he then rolls 8 sheets of dough, one at a time, onto the rod. Next, he unrolls them one-by-one, flips them and reverses the process. Finally, he rolls all 8 sheets up on the pin and pulls and twists them to make them even thinner. Chef Malgieri said that one baker and producer in Turkey used 1,000 kg of flour a week: 500 kg for the dough and 500 kg to toss around while making it. Hopefully, not all 500 kg went into the waste bin!

In another clip Chef Malgieri showed us, a yufka master sits with a huge one-meter-long griddle in from to him, a long pole elevated horizontally at his side. While a one meter round bread sits on the grill, the master takes a raw circle and swings it above his head, stretching it to the limit, much like a pizza maker. At times, it covers his whole head and upper torso like a cape. After the bread is sufficiently stretched, he flips it back on the grill and then quickly pulls it off with his long wooden rolling pin. He then stacks it onto a pile of cooked breads and, in one motion, pulls a fresh sheet hanging from the pole next to him and begins the process again. Not bad for a mixture of flour, water, and salt.

Yufka is extremely versatile. It can be used as a dry flatbread, slightly dampened until flexible for wraps. It can also be layered and folded, as well as rolled into pies called boreks or other savory pastries.

After we watched the video, Chef Malgieri showed us his yufka-making prowess. We watched as he made thin sheets of yufka, and later, used them to make a beautiful Peynirli Böreg: a savory pastry made by layering feta, yufka, mint and eggs, then topping with raw, un-hulled sesame seeds and baking to golden perfection. We all happily sampled this pie, which is traditionally eaten for breakfast.

Another dish that was all but inhaled by attendees was a savory Turkish pastry called Patatesli Peynirli Gözleme: a griddled and baked yufka filled with potatoes, Turkish cheese (peynir), scallions, parsley and Aleppo. We also sample Sigara Boregi, a Turkish fried “cigarette” pastry. This pastry was filled with a crumbly feta and mint, rolled into a cylinder, fried and served right out of the hot oil. (This is one cigarette habit that would be hard to break.)

Spending the afternoon with Chef Malgieri and munching on savory Turkish pastries was almost as good as taking a journey to Turkey itself. Learning about these ancient and delicious pastries and the labor that goes into them was fascinating (not to mention delicious!). For those of you who want to try making yufka yourself, the dough can be purchased through Turkish and other specialty markets. While labor intensive, the end result is entirely worth it!