On the surface of things, there were no overt signs that I would ever become a professional cook. I’ve only come to appreciate any early, subtle triggers in hindsight. So many of our tastes and habits stem from the rituals we participate in at a young age, especially those that involve food. For many chefs, these rituals act as catalysts, informing their career paths. These memories are so strong that we are constantly looking to feed a hunger for nostalgia, both for ourselves and for those we cook for. In particular, as a pastry chef, I’ve come to appreciate the subtle and not so subtle roles sweetness plays in our lives. 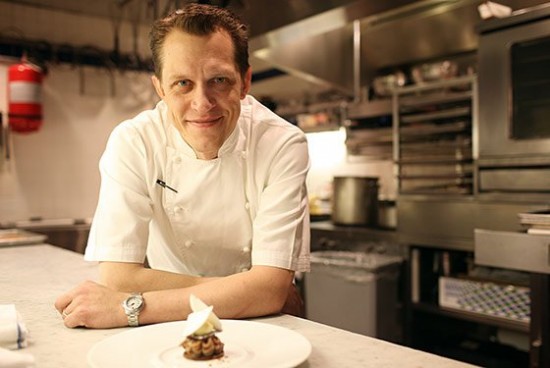 No offense to my well-meaning parents, but I didn’t grow up with much exposure to the wonders of gastronomy. I had no revelatory, life-changing encounters with caviar, oysters or foie gras at a young age. Nor was I some constant, curious shadow lurking in the kitchen, an ever-present tot tugging at my mother’s apron strings. Mealtime was always an important family gathering, but the food at the heart of it tended toward the utilitarian. We ate from a steady rotation of modest middle class fare: pot roast, spaghetti, meatloaf and casseroles of all kinds. My mother was a good cook, but the budget never allowed for much beyond the basics, and dining out at restaurants was a rare luxury. Of course, coming of age in early 80s suburbia didn’t set the stage for much culinary adventure. The average supermarket chain was still barren of the bounty of fresh ingredients we take for granted today—exotic fruits, fancy cheeses, or any semblance of authentic ethnic or seasonal fare. Though both of my parents grew up on farms, the cultural turbulence of the 60s and the transition from rural to suburban life nearly severed that connection within one generation. By the time I was born, both sets of my grandparents had all but sold off their land in northern Michigan. Only later, as a cook, would I truly appreciate the agrarian tradition in my not-so-distant past.

I eagerly soaked up any stories I could coax from both sets of my grandparents before they passed away. (My father grew up with several dozen head of dairy cattle and a modest egg business supplied by nearly 400 laying hens. As a youngster, his chores included feeding the newly born calves twice a day and gathering eggs. As soon as he was old enough to manage the wheel of a tractor, he spent summers in the fields—some 150 acres his father planted with soy, corn, buckwheat and string beans.) I wanted to know when my grandfather, Stanley, planted the winter wheat, and the detailed laying cycle of his hens. I treasure the amusing tales told of cattle breeding mishaps and his rather unscientific experiments in homemade hooch and dandelion wine. When I was eight years old, I stood squeamishly by my grandfather’s side as he quickly scaled and gutted a tiny bluegill—the first fish I ever caught on my own. It was an important rite of passage. Neither of us could have known at that visceral moment that I’d one day work at one of the world’s most renowned fish restaurants.

The colder, shorter days that descend with the slow creep of autumn always brought special associations. Until I was old enough to know better, I believed that the true purpose of Thanksgiving was that my birthday always lay within a few days of our traditional family gathering. Thanks to Geraldine, my paternal grandmother, I still associate pumpkin pie with birthday cake. The lavish holiday spreads she produced—seemingly out of thin air—catered to every taste at the table, though I appreciated most the special attention she paid to my own particular likes and dislikes (whatever they were at any given time of my adolescence). Geraldine also curated a secret cookie drawer, packed so full it barely opened and closed. Upon every arrival and departure from the house, my sister Amy and I always had free reign to whatever we could hold onto or stuff into our mouths. Though today I might incorporate sophisticated gelées into decidedly adult desserts, the history of my competitive nature is also linked to gelatinized desserts—by way of Jell-O “races” I challenged my great uncle too. A quiet mentor to me throughout my adolescence, Uncle Ed always made sure I won, though I rarely made it through a full bowl without forfeiting to giggle fits.

Another annual ritual would take place a few weeks later, perhaps some snowy afternoon in December. The four of us—Mom, Dad, my sister, and me—would pore through the dog-eared collection of cookbooks and handwritten recipe cards in the cupboard, and we’d each choose our favorite cookie recipes. Then we’d commence production: Dad measured, Amy and I mixed, and then Mom navigated the endless trays of dough in and out of the ovens. As a half dozen or more varieties cooled on every available inch of counter space, the windows would begin to fog, and the whole house was awash with the scent of all that freshly baked goodness. Over the coming days, these cookies would be divided into parcels to be delivered to friends, family, and neighbors. With any luck, our own personal stash would hold out until at least Christmas Eve. Even amidst the rush and clatter of a professional kitchen, I occasionally channel that feeling of anticipation and collective effort when reflecting upon an oven full of pastry. While pastry chef at Le Bernardin, I always looked forward to the annual holiday party for the staff and their families, held on a Saturday in mid-December. Setting aside the sophisticated sweets served in the dining room, it was the one day of the year our pastry kitchen turned out simple classics like cream puffs, brownies and even sugar cookies in the shape of snowmen. Over the years, a clear favorite from that repertoire emerged among the cooks, waiters and their children alike: my triple chocolate chip cookies. Comprised of a cocoa-enriched dough packed with milk and white chocolate chips, these humble, nostalgic cookies evoke the essence of my own roots and family rituals. 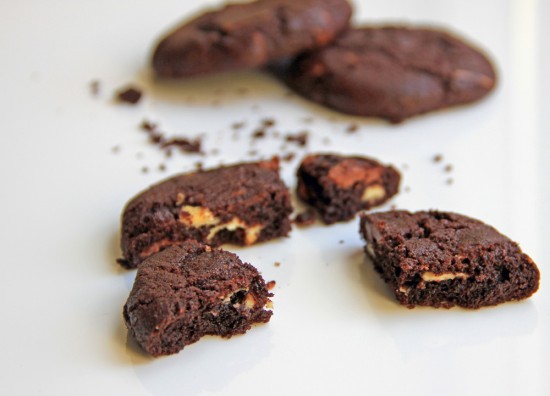 Sift together the flour, cocoa powder, and baking soda. Set aside.

Interested in taking classes with Chef Michael? Check out his full range of Advanced Pastry Classes at ICE.