Follow the celebrity chef from New York to Nashville to Food Network.

Of all the career changes ICE students have made over the years, figure skater to chef might be the most unusual. That’s just what ICE Culinary Arts alum Arnold Myint did, building on his talent for showmanship to develop a nationally recognized culinary brand.

Initially, Arnold’s passion for performance led him to New York City, in hopes of transforming his figure skating training into a career on Broadway. While he was auditioning, Arnold supported himself by working in restaurants and realized that he connected more with the kitchen than with front-of-the-house roles. 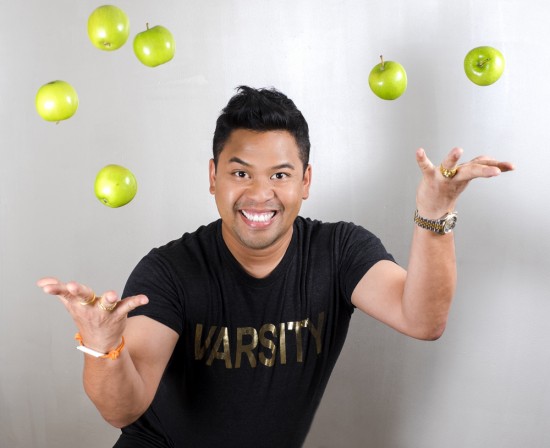 New York City wasn’t Arnold’s first interaction with the culinary industry. He grew up in Nashville, where his mother owned and operated multiple Thai restaurants. “My mother is an amazing business woman and chef herself,” says Arnold. “She has always been my main base for business savvy. Once I decided I wanted to pursue my culinary career, I knew I needed to gain technique to measure up in the kitchen.” After enrolling in ICE’s Culinary Arts program, Arnold set his sights on pursuing a career under one of his culinary heroes: Jean-Georges Vongerichten. “My first written assignment at ICE was to write a report about a chef I respected, and I immediately thought of Jean-Georges,” says Arnold. “His incorporation of Asian ingredients within the technical vocabulary of French fine dining was always an inspiration, given my family’s culinary heritage.”

Taking advantage of ICE’s central New York City location, Arnold soon found a position at one of Jean-Georges’ restaurants. He continued to work within Jean-Georges’ restaurant group for several years — including an externship at Mercer Kitchen and as a line cook at V Steakhouse in Columbus Circle. Yet Arnold was also eager to try his hand at multiple sides of the business, so when his mother asked him to open a new restaurant at one of the family’s properties in Nashville, he jumped at the chance. That restaurant, PM, gained praise for its “Asian pub” menu, featuring small plates, a sushi bar and a fusion burger. Arnold has since opened or partnered in three other Nashville restaurants. These include a chef-driven tasting room called Cha Cha, the French-themed BLVD and the kitschy, Asian-fusion hotspot Suzy Wong’s House of Yum.

At the same time, Arnold was consulting on the beverage program at a former Jean-Georges colleague’s restaurant: Rock Sugar in Los Angeles. “Nashville offered me unique opportunities, but when I first moved back, the dining scene didn’t have the same diversity as NYC or other large cities. I knew that I wanted to have the opportunity to travel and work with other companies.” Juggling front-of-the-house with back-of-the-house operations continued to provide Arnold with the opportunity to further develop his skill set in entertaining. Given his background in performing, it’s no surprise that Arnold always wanted to try his hand at food television. “I love competition — it’s why I was a figure skater — and being in front of an audience. I won several cooking competitions when I was a student at ICE, and I got addicted to that thrill. So when the opportunity to audition for "Top Chef" came up, I knew it was something I wanted to pursue.”

In addition to appearing on "Top Chef" Season 7, Arnold most recently competed alongside fellow ICE alum Dom Tesoriero on Season 11 of "Food Network Star." While his forays in food television may take him out of his kitchens, Arnold has seen incredible benefits for his staff at home. “I’m not in my restaurants that much, but every time I go on television, it drives traffic to the restaurant and my staff benefits a lot. It’s motivated me to develop a model where [they are] extremely well-trained and fully supported in terms of health benefits, vacation, etc. As a result, my staff is exceptionally loyal, which allows me to continue pursuing an increasingly diverse career.” Looking to the future, Arnold wants to build on his combined passions for food business and food media.

“Everything I’ve done has been working towards developing a lifestyle brand. I have a lot of insight to share beyond recipes, and I’d like to help others learn how to entertain at home. I want to show how fun and easy the rituals of party planning and hosting dinners can be.”