Here's how the soups, noodles and toppings differ among the popular bowls of warmth.

Culinary Arts Chef-Instructor Chris Arturo made a name for himself in the world of ramen with his New Jersey pop-up, Ronin Ramen, and then as chef of Ani Ramen House in Jersey City. Here, he compares two of his favorite Asian soups and ideal winter comfort foods.

I’ve never come across a food preparation more cherished, opinionated or fought over as ramen. It’s been a passion of mine for quite a while to seek out the perfect bowl of soup and in doing so I came to realize something: Ramen had a contender for best soup on the block. Pho became part of my rotation to satisfy an almost daily noodle craving. I was hooked. The preparations are decidedly different, and yet, like most things, we can find similarities between the two just as easily.

Pho soup is traditionally made with beef knuckles, a charred onion (known as cloute in French cuisine), roasted ginger, Saigon cinnamon, and some combination of star anise, black cardamom, coriander, fennel seed or clove. This lends a rich complexity to the broth with decidedly sweet notes. The historic French occupation of Vietnam can be seen in the stock making skills at every restaurant that serves pho. The clarity of the broth is a highly sought after characteristic while intensely flavorful. Parallels can be drawn between pho soup and the traditional French white stock preparation of marmite. The bruleed onion in marmite gives it its characteristic amber color. Other than a similar preparation with chicken bones, pho soup remains generally in line with the above preparation, and pho broth is seasoned with either salt or MSG.

Ramen soups are as varied as the regions they come from. In colder regions, the soup is heavier and the fat is emulsified into the broth. The most common and popular among these are tonkotsu (not tonkatsu!). Quite like traditional French stock making, tonkotsu starts by blanching pork knuckle bones known as genkotsu from cold water to remove the blood and impurities. That water is then replaced with fresh and boiled for 12 hours to emulsify any fat and marrow exuded from the bones. The finished stock should be creamy in texture and pale in color. A similar preparation is tori paitan, which uses chicken bones in the same manner to make a creamier stock.

Most other ramen broths are judged by clarity, a distinct parallel with pho. Chicken soup for ramen is almost exclusively a white stock preparation. Feet are added for collagen content, but aromatics are reserved for later. Once the impurities are skimmed away and the chicken fat has been harvested for uses elsewhere in the kitchen, a combination of kombu, onion, scallion, garlic, dried shiitake and ginger is steeped like tea for the final hour of cooking. Not every ramen broth is prepared this way, but it’s a good idea of the procedure.

Ramen broth is unseasoned, with the exception of miso ramens. Miso broths usually involve a house-mixed miso paste with a certain ratio of paste to stock. This ensures consistency across each bowl. The standard procedure for seasoning ramen is to use a liquid seasoning. We refer to those as tare and they come in two styles: shio tare, which is salt-based, and shoyu tare, which is soy-based. Shio tare usually consists of multiple sea salts dissolved into a simple dashi of kombu and katsuobushi. Dashi refers to a simple stock in which large sea kelp is simmered in water and then finished with cured, smoked and petrified skipjack tuna called katsubushi. You may commonly see it referred to as bonito flake in the U.S. This yields a super intensely flavored liquid. The darker, sweeter, yet still salt-forward cousin of this is made with a soy sauce base and is referred to as shoyu tare. It’s generally a seasoned soy sauce in which sugar, salt, garlic, ginger, dried shiitake, and sometimes even crisped chicken skin are simmered until the flavors meld and the soy thickens slightly. When assembling ramen, I start with the tare. Usually, I use a ratio of 0.75 fluid ounces of tare to 10 fluid ounces of broth.

Another difference between ramen and pho is the type of noodle. Pho exclusively uses flat rice noodles. The natural starches provide an excellent chew and absorb flavor from the broth extremely well. They’re kind of a one-trick pony, though. The only difference being the use of fresh or dry noodle. 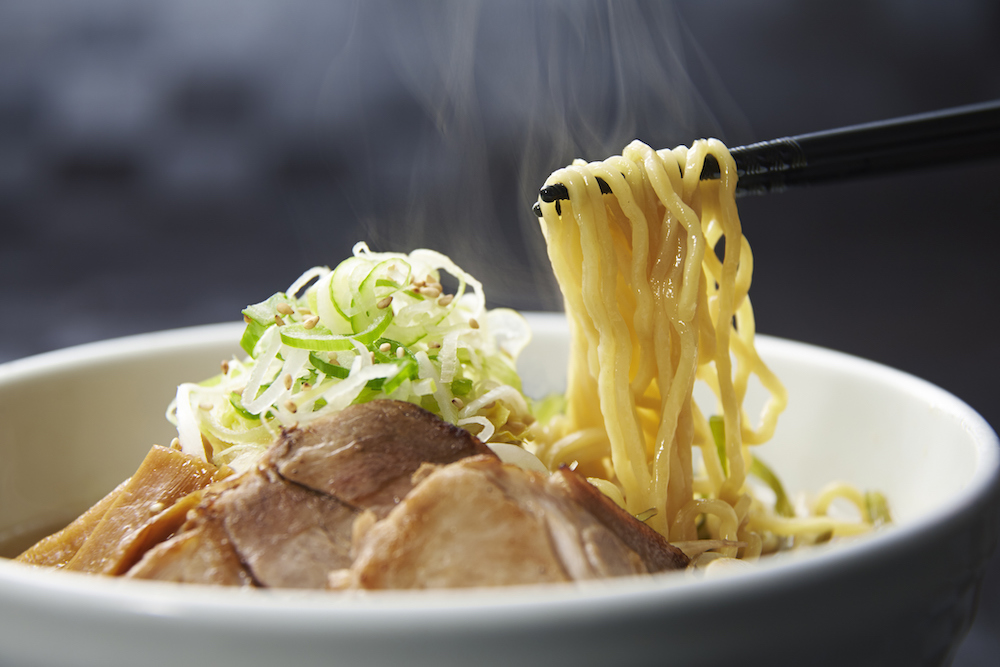 Ramen noodles are a bit more complex. Ramen is actually a Japanese take on a Chinese noodle. The water used to make the original noodles in Mongolia came from lakes that had high concentrations of potassium carbonate. This makes the water quite basic on the pH scale. It has a yellowing effect on the flour, sweetens the noodle and greatly affects the gluten structure. This makes for a much chewier and stable noodle, which holds up to the high liquid temperatures in tonkotsu and other such emulsified broths. Nowadays water, potassium carbonate and salt are referred to as kansui and can be purchased in vials at your local Asian grocer.

Ramen noodles come in a variety of thicknesses and vary between straight or wavy depending on the soup being used. Generally thinner noodles are used for heavier broths and thick for more delicate broths, but honestly, it’s a matter of preference. Certainly preparations like mazeman, a broth-less ramen bowl in which the noodles are coated with shoyu tare, chicken fat, sesame and chili oil, lend well to a thicker noodle. The current boom in ramen popularity in the U.S. is directly related to high-quality noodle availability. Sun Noodle is a company in Hawaii owned by the Uki family, which started by making a Hawaiian noodle called saimin in the early ’80s. They now have three factories across the U.S. and supply a large majority of the ramen shops we love to frequent.

Seasoning and All the Toppings

Pho can receive myriad toppings as far as proteins are concerned. Most are cut ridiculously thin in order to be cooked gently by the boiling hot soup. Most pho restaurants have a laundry list of thinly sliced beef options. Some have been seared slightly to provide a bit more depth of flavor from the Maillard reaction. Some are cooked for hours such as tripe of beef tendon. My favorite go-to is some combination of beef tendon, tripe and rare tenderloin. Then we get to the vegetable toppings and sauces. Most American pho stands have Thai basil, hoisin, lime wedges and sriracha set up on the table before you sit down. Scallion and mung bean sprouts are atop your protein in the bowl of soup, and soft-boiled or coddled eggs are served separately.

Ramen toppings range between proteins, pickles, oils, animal fat and dried spices. A traditional shoyu ramen might have a base of shoyu tare and chicken stock. Thin noodles are cooked for just over a minute, shaken till dry in the noodle basket and placed into the soup. Toppings might include a chicken thigh cooked in soy and other seasonings, blanched spinach, a marinated soft-boiled egg (known as ajitama or ajitamago), scallion, mung bean sprouts, chili oil and chicken fat. The possibilities are endless. Undoubtedly, ramen can be as strong or nuanced as any mole negro and just as difficult to execute properly.