Here's how he combines his culinary education and authentic ingredients.

May 19, 2021 by Kiri Tannenbaum — Director of Culinary Relations

When Adriano Piazza first toured the Institute of Culinary Education’s Los Angeles campus, he already knew his post-graduation plan: to reincarnate the space his grandfather purchased in the early 1980s in the seaside town of San Clemente.

Originally from Sicily, Adriano’s family laid roots in Southern California more than four decades ago. His mother attended Pomona College and then returned to Italy where Adriano and his sister were born and raised. Their mother’s penchant for SoCal remained, and she always planned to return and reunite with her parents.

After graduating with a degree from the University of Gastronomic Sciences in Piemonte, Adriano and his family moved to California in 2016. With a degree under his belt, he immersed himself in the food industry and became a food and beverage buyer. When the lease for his grandfather’s former retail space became available, Adriano accelerated his long-term plan to open a true Italian deli. 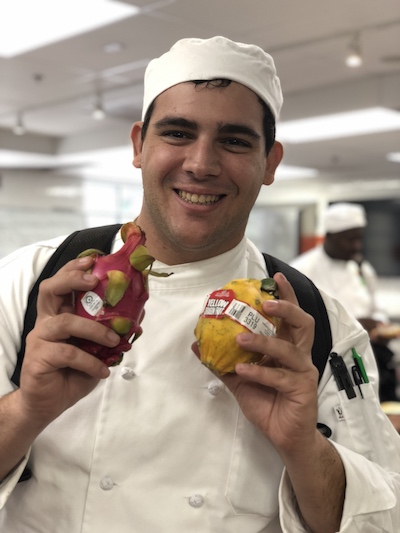 He enrolled in Culinary Arts at ICE, determined to absorb every facet of the program. “For me, it was fundamental to come to culinary school and have a formal education,” Adriano says, driven by a desire to understand the nuances between cooking and operating a restaurant in Italy compared to how things are done in the United States. “Rules, regulations, habits — I was taught how to run a restaurant here,” he says. In addition, he found being in the kitchen-classroom not just informative, but enjoyable. “Culinary school was my happy place.”

Chef-Instructor Mike Pergl left a lasting impression, equally demonstrating techniques and guiding the mindset of future chefs. “He told me to keep a cool head under pressure as stressing out doesn’t lead to anything other than making mistakes,” Adriano shares. “I lived by that.”

Adriano honed his skills, learned proper cleaning habits and restaurant procedures, and developed dedication to his craft. Chef Pergl instilled that students could succeed if they invested time and effort, and Adriano believes he is living proof that this philosophy works.

In the first three weeks that Adriano opened Pronto Deli, he worked long days. “I was so overwhelmed, but at some point, it started working out,” he explains. “Things went smoother and smoother and smoother.” The dedication and two years of planning paid off: His new eatery is already attracting a local following and press.

“We are trying to differentiate ourselves from other places. We have a scratch kitchen and everything is cooked daily, made in house or imported from Italy,” he says. Charcuterie, cheese, wine and beer are imported while salads, panini, pasta and thin-crust pizzas are made from scratch daily. 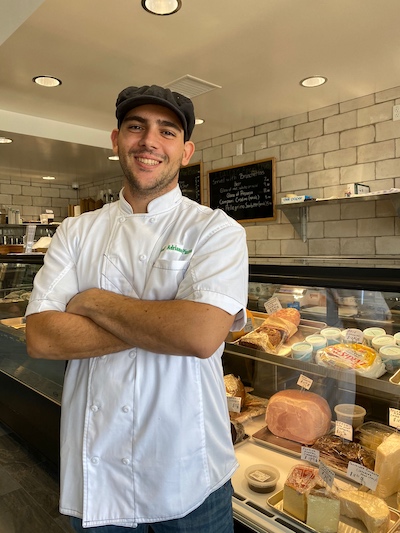 “I am super passionate about the pizza. I make the dough in-house every night.” It helps that Adriano’s family members contribute. His mother’s homemade tiramisu is popular among new customers, often selling out. Plus, Adriano completed work on the 25-seat outdoor dining patio, a favorite spot for aperitivo hour. “My plan is to do a wine dinner in the future and offer private events for a multi-course tasting menu.”

Adriano chose ICE because it was the right fit. “ICE was so welcoming,” he says. “I got to meet all the chefs and people were super friendly.” Two years after graduating from culinary school, Adriano is thrilled to operate the restaurant of his dreams in the building that his grandfather purchased 40 years ago. “It makes me really happy to see people happy and regulars. It makes me appreciate all the hours that I spent on the menu, the product, the selection — I get such a payback seeing people come in over and over and over.”

Adriano encourages aspiring chefs and restaurateurs to stay true to their passion. “It is such hard work, but it is so worth it,” he says. “ICE gave me the courage to do what I like — believe that what I cook is good, the confidence that if you follow the right procedures, buy good ingredients and follow your heart, you will sell your food and people will appreciate it.”

You can fulfill your culinary diploma dream at ICE in less than a year.