Years ago, while working as the pastry chef at Le Bernardin, I began giving serious thought to the role of nostalgia and the sense of memories tied to taste. I still enjoy finding playful yet subtle ways to weave humble, familiar flavors and a reminiscence of childhood into sophisticated desserts without being too obvious or kitschy. It’s especially fun to slip a sweet surprise into a classic unexpected form. In this spirit, the idea for crunchy popcorn choux was born. 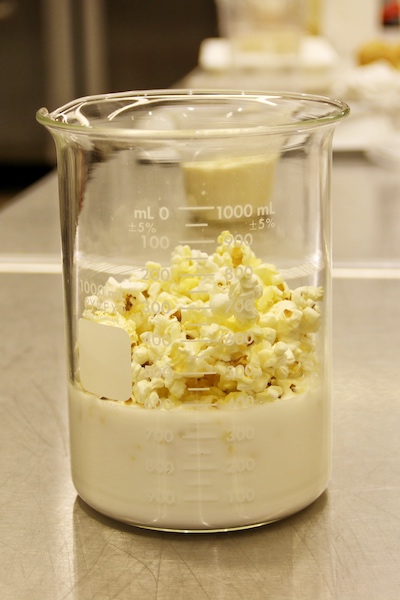 Native to the Americas, corn, or maize, was among the first domesticated crops sown, roughly 10,000 years ago. It’s believed that corn was popped into a snack (and perhaps as ornamental decoration) as early as 4,000 B.C., based on archaeological finds from modern-day Mexico down to Peru. In more recent food culture, it was enjoyed by Native North Americans for centuries. By the time it was introduced to colonists arriving from Europe, popcorn was a fairly common, albeit novel, snack, made in small quantities by hand – sometimes as a breakfast cereal. It likely achieved its ultimate "pop" culture status by the dawn of the late 19th century, as large corn popping machines made it even more accessible and portable. Sales and consumption hit all-time highs since the early 1980s and the introduction of microwave popcorn.

The commercial popcorn we use today is a type of flint corn; the everta variety is most common. The mechanism behind the popping begins with the moisture in the starchy core of the corn kernel, which is protected by a hard shell, or husk. When heated, the water in the corn rapidly expands as it is converted to steam, building up enough pressure (in excess of 135 pound/square inch known as psi) to rupture the husk and create an airy edible foam of gelatinized starch. This expansion happens so fast that only a high-speed camera can capture the perfect pop. The Modernist Cuisine team in Bellevue, Washington, shot this video at 6,200 frames per second:

We all know popcorn as the salty, often buttery and sometimes sweet snack; it’s the perfect flavor to drop into a different context. Using a crunchy-topped pâte à choux as a vehicle, I incorporated popcorn into a creamy filling. In order to maximize the impact of flavor, I reworked the traditional pastry cream custard into a lighter and cleaner base. It begins with an infusion of freshly popped kernels in warmed milk and cream. After a few hours, the solids are strained out and discarded. The infusion is then brought to a quick boil with agar, the algae-derived gelling agent, and a touch of sugar and salt. By the time the popcorn infusion cools to room temperature, it will have set into a firm, brittle gel. Agar gels have a special rheological property called shear thinning, which means that whizzed up in a blender, the rubbery gel is rendered smooth and creamy. This technique is sometimes referred to as a fluid gel, and a few other hydrocolloids like pectin, gellan gum and carrageenan share similar properties. Used in place of a classic pastry cream, which contains eggs, butter and starch, this preparation has a lighter texture and cleaner flavor that allows the popcorn flavor to shine through.

As for the choux itself, I like to pipe the batter into silicone molds for consistent size and shape – and for large volume, it’s the best method for organizing production. The crunchy coating baked onto the choux puff is roughly equal parts butter, sugar and flour, which allows the "craquelin" topping to spread and expand during the bake. I thinly sheet the loose dough and freeze; with a rung cutter greater in diameter than the molded choux, I cut discs that are wide enough to fully drape the puff. When ready to bake, I allow the frozen pieces to fully thaw in order to get the best rise. Once in the oven, I start with high heat and slowly bring the temperature down – once the initial oven spring and browning are achieved, the baking becomes more of a drying process. 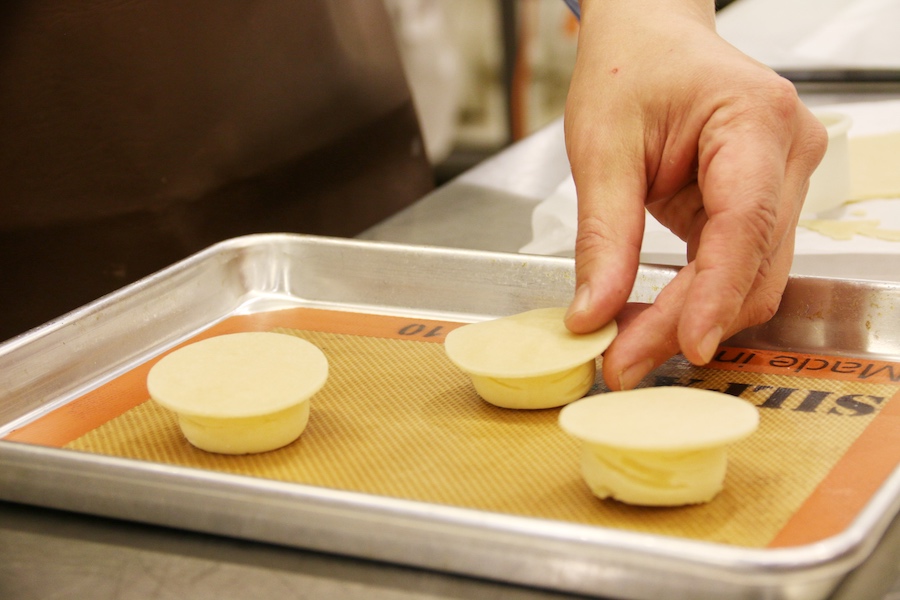 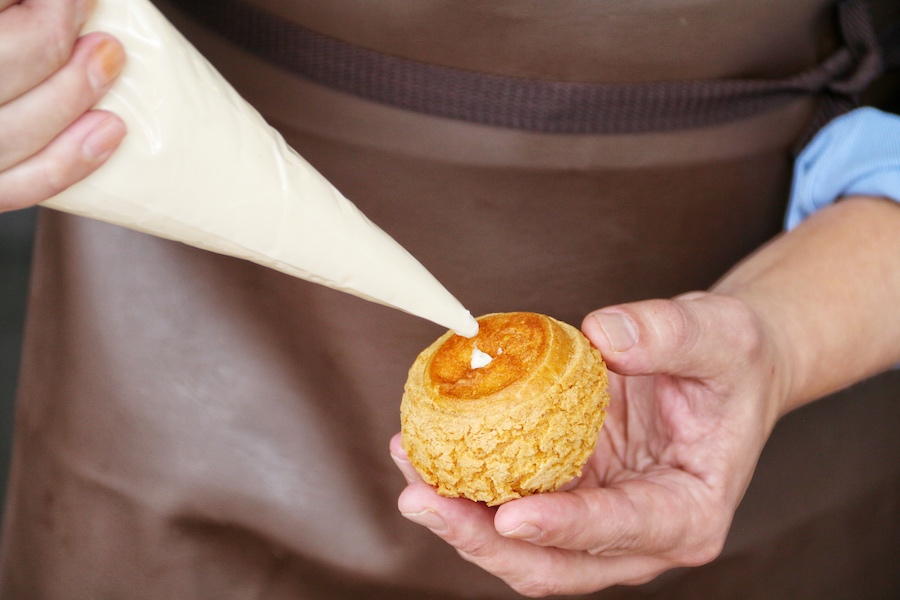