One History of the Brownie - Plus the Original Recipe!

It’s hard to truly determine who ought to be credited for the first brownie. One version of history credits Bertha Palmer, a Chicago businesswoman and socialite, for inspiring the sweet that is about as American as apple pie. On a recent visit to Chicago, I took a walk down one of the brownie’s memory lanes.

Bertha was the wife of Potter Palmer, a wealthy businessman who was very much involved in the development of downtown Chicago. They were introduced by a mutual friend and Potter’s former business partner, Marshall Field (whose department store acquired and popularized Frango chocolate truffles, by the way).

As a wedding gift to his bride, Potter gave Bertha an extraordinary gift — The Palmer House hotel. Under the couples’ ownership, largely directly by Bertha, The Palmer House became the epicenter for entertainment amongst socialites in Chicago and well-heeled travelers worldwide. In 1893, for the World’s Fair: Columbian Exposition, an event that would draw influential people from around the globe, Bertha entertained the notion of creating a small confection that has since become beloved all the world over. 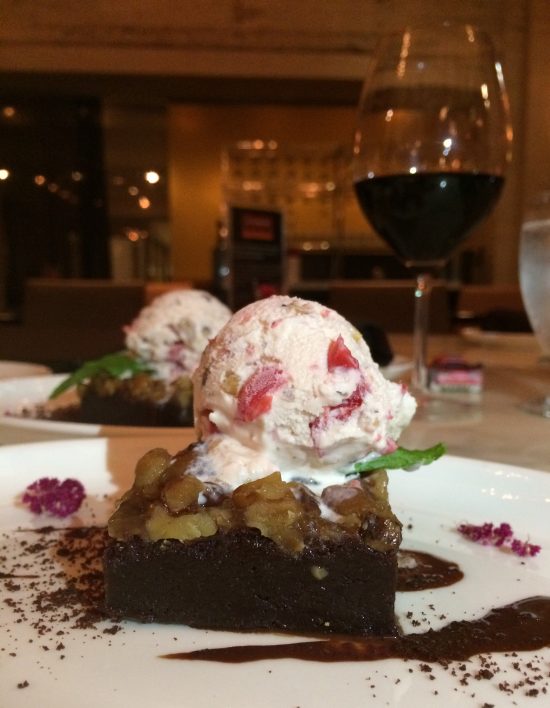 Storytellers say that for the World’s Fair, Bertha asked The Palmer House pastry chef to create a small cake or confection that could be included in boxed lunches for ladies visiting the fair. The pastry chef developed a thick, dense, fudgy chocolate bar, covered in walnuts and a sweet apricot glaze. It was unlike any other confection and became incredibly popular.

Though it still wasn’t called a “brownie,” as similar versions of the dessert later appeared in the Sears Roebuck catalog and in cookbooks by Fannie Farmer and others, its name was given.

More than a century later, you can still enjoy a square of warm chocolate goodness topped with ice cream made with the same recipe used in 1893 at The Palmer House. Or, if you can’t make it to Chicago anytime soon, you can create a batch of brownies yourself using the recipe below, adapted from the original.

*Pro Tip: The brownies are easier to cut if you place in the freezer for about 3-4 hours after glazing.

For the Apricot Glaze

i love brownies, it is so good to find out where our delishious treats came from.

How to Make the Ultimate Latkes, According to ICE Chefs