The Next Big Bite

What is the Future of Food?

“The future of food is cooking — is all of us cooking,” said Melissa Clark on Monday night to a roomful of guests ranging from food industry pros to zealous foodies at the Institute of Culinary Education. The occasion was the third annual “The Next Big Bite” event presented by Les Dames d’Escoffier, and the question on everyone’s mind: what is the future of food? 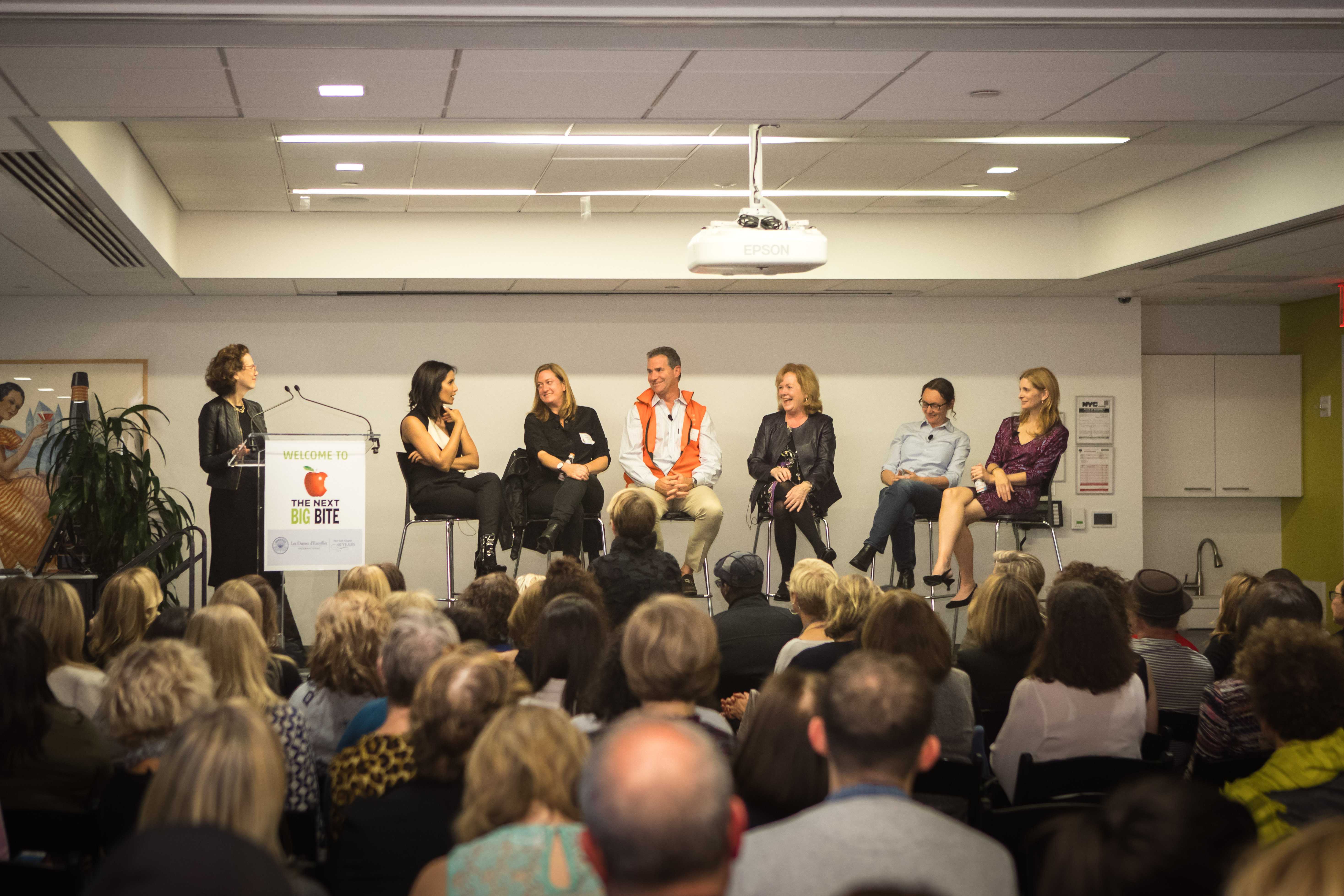 So what was the consensus? For starters, food and how we eat are getting more expansive. On a global level, food is becoming “post-ethnic,” in the words of Lakshmi, who noted the way that culinary trends mirror global migration and the convergence of cultures. Also expanding is the concept of food, and in particular, what is considered good food.

Chefs, for example, are using wider nets to choose fish to serve in their restaurants. Heffernan explained how unfortunate nomenclature keeps certain, readily available fish — like dogfish — from gaining the popularity that their flavor merits, and the brilliant marketing tool that chefs sometimes use to get unjustly maligned seafood back on menus: just change the name.

As for cooking approaches, prepare yourself for “stem-to-stalk” cookery, the veggie counterpart of nose-to-tail, with a focus on using vegetables in their entirety, simultaneously reducing food waste and making vegetables the star of the show (or plate). But Missy Robbins reminded the audience that balance is key, and that focusing on vegetables doesn’t mean rejecting meat.

On a more rudimentary level, Clark rallied in favor of (confidently) making anything for dinner — be it eggs or a bowl of oatmeal — as long as it’s delicious and what you’re craving. Taste trumps tradition; cooking need not be complicated.

So how can people feel more comfortable in the kitchen?

Lakshmi suggested starting early: get cooking back into schools. Lakshmi noted that the disappearance of programs like Home Economics has created a generation that doesn’t know their way around the kitchen. School lunches, too, were on the menu on Monday evening, or rather, how to fix them.

“Vote,” stressed Heffernan, who championed more political activism in the food community to bring about changes like healthier lunches for children and better food regulations. When it comes to dining out, Robbins’ new restaurant Lilia in Brooklyn exemplifies the rise of fine casual dining — creative, bold flavors served in an informal, casual environment.

We’re seeing “[t]he casualization of great food, truly great food,” Cowin observed. Eateries are swapping white tablecloths for reclaimed wood and trading the velvet rope for cozy neighborhood vibes, a sentiment captured by Robbins, who shared, “I always wanted to create the restaurant that I wanted to go to every night, like it was home.” Judging by the nightly crowds at Lilia, there is no doubt it’s a place that many would like to call home — or at least eat there every night.

At “The Next Big Bite,” the panel went beyond the flavors to be expected on menus and Instagram feeds, and offered practical ideas for effecting social change. When it comes to the future of food, the collective mindset is moving toward being healthier, more global and more conscious of the impact of food on communities.

And cooking more is the key: cook more, cook what makes you feel good, and when you’re not cooking, enjoy the growing number of eateries that are on a mission to serve delicious food with no pretense. If and when you do see dogfish or porgy on the menu, don’t be put off: give them a try, too.