Last week, DICED told you about the new Chef Instructors in our Culinary Arts classrooms. But ICE also recently hired a team of new Chef Instructors for our Pastry & Baking Arts program. With their wide and varied backgrounds, they are sure to bring a plethora of skills and techniques to their ICE students. Vicki

Wells comes to ICE from a role as Executive Pastry Chef at Buddakan. Chef Vicki is already a member of our Advisory Board and has an impressive background. Inspired by the legendary Madeleine Kamman, Wells left Emerson College to study under Kamman. Upon completing her studies, she went abroad to study with the French masters at La Varenne.

In the ensuing years, she gained experience while working in the kitchens of some of New York’s finest culinary masters, including Sarabeth’s Kitchen, Hotel Plaza Athenée, Maxim’s, Montrachet, Rakel’s, Metro, El Dorado Petit, Le Bernardin and Trattoria Dell’Arte. In 2000, Bobby Flay invited her to take over the pastry departments of his restaurants, Mesa Grill and Bolo, and eventually Bar Americain.

Chef Vicki has been one of Flay’s sous chefs on Iron Chef America five times and won every time! She was listed as on of Pastry Art and Design’s Top Ten Pastry Chefs in America in both 2002 and 2003. Rachel Binder joins the ICE Pastry & Baking Arts team from her prior role as Executive Pastry Chef at Tabla, where she worked since 2009. 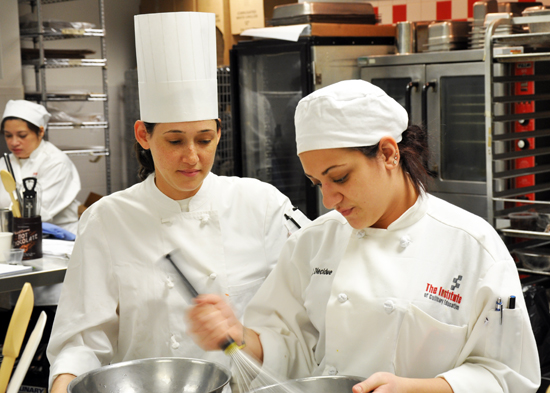 Chef Rachel credits her love of food to baking with her mother and grandmothers in Jerusalem where she was raised. A graduate of the State University of New York at Binghamton, Rachel studied pastry at the New York Restaurant School and externed at Union Square Café. Under Chef Peter Hoffman of Savoy, she developed a passion for seasonal, local and sustainable food which she has continued to nurture and develop.

Victoria Burghi, an ICE Culinary Management alumni, was the opening Executive Pastry Chef at Union Square Café. She was born and raised in Uruguay and like Chef Rachel, she learned to cook with her grandmother. She landed her first professional pastry job in Greenwich, Connecticut. In 1996, she became the Pastry Chef of Tapika, a southwestern restaurant in New York City. Since then, she has worked with some of the city's best chefs, including Michael Romano, Andrew D'Amico, David Walzog and Hok Chin.

Also joining the pastry team is Chef Alain Ridel. He was born and raised outside of Paris and completed his Pastry Arts training at Juvisy-sur-Orge. At 14, he became a pre-apprentice in a patisserie in town and he received his diploma at 17. He worked in various pastry shops in and around Paris for 10 years, earning a restaurant management degree in the process. Looking for new challenges, Ridel took a job as a pastry chef in London. Ridel has been living in NYC since 1996, working at Windows on the World and then in a gourmet retail shop, before getting into teaching.

One of the new Chef Instructors is also an ICE alum. After graduating from ICE, Caryn Stabinsky found herself working at Oceana, cementing her classical training and then moving on to work under Sam Mason at wd-50.

From there her career as a pastry chef blossomed from being the opening pastry chef at Urena to working as the pastry chef at Graydon Carter’s exclusive restaurant, Monkey Bar. Now, she and her husband have opened LOAF in Armonk, NY. They plan to bring their combined experience and love of food to establish a cafe that both nourishes the body and soul. It’s an exciting time for ICE’s new Chef Instructors and the Pastry & Baking Arts students in their classes.