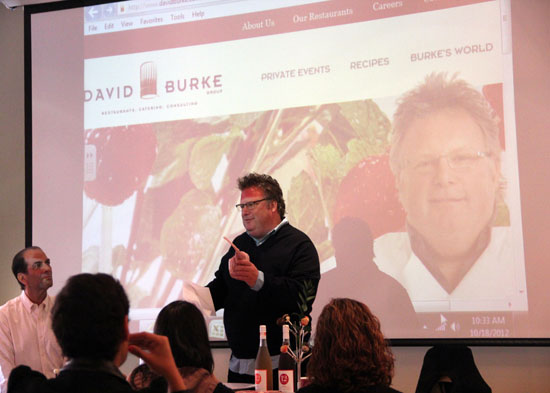 Known for his whimsical dishes such as cheesecake lollipops and pretzel crusted crab cakes, he shared stories about his creative ventures, discussed how Social Media impacts restaurants and gave out his digits in case you need a reservation. His visit was part of our series called Meet the Culinary Entrepreneurs, which gives students the opportunity to learn about operating a culinary business from some of the country’s leading restaurateurs. Burke entered the room and had beautiful examples of his work to show students.

He shared how he got his start as a dishwasher and mentioned that he didn’t chase a dollar bill for the first ten years as he wanted to gain all the experience he could. And gaining experience is what he did, traveling through France and working with notable chefs such as Pierre Troisgros, Georges Blan, and Gaston Lenotre. He returned to the U.S. to serve as a sous chef for Waldy Malouf at Le Cremaillere and then for Charlie Palmer at River Café, where he ascended to Executive Chef and earned three stars from The New York Times.

In 1992, Burke opened the Park Avenue Café with Smith & Wollensky CEO Alan Stillman, and then, in 1996, he became Vice President of Culinary Development for the Smith & Wollensky Restaurant Group. From there, the David Burke brand emerged and continues to grow in a variety of ways whether you are dining at Townhouse on the Upper East Side or grabbing take-out from Burke in the Box at Bloomingdale’s.

Anyone who has been to his restaurants knows that presentation is essential - especially if you’ve seen his chocolate Park Avenue bench. He has never advertised and instead sends his guests out the door with eccentric packaging to gain brand recognition – similar to the blue bag for Tiffany & Co. Burke spoke a lot about his signature touches, such as serving sashimi on a salt block and presenting his lollipops inside a tree. He noted that he sees cheesecake pops around town and his motto is “if they are copying they can’t catch up.”

Following that bit of wisdom, one student asked what inspires him to come up with a new dish, and his response was seeing something being thrown away in the kitchen and dreaming up a delicious use for it. He was also asked to describe to the students what it’s like when he walks into one of his restaurants. Burke said the first thing he does is check the doors for fingerprints, and after that, he makes sure the lighting and the music are at the appropriate levels. Most of all, he shared that there is an energy of a good time when things are going right. When people are having their 2nd and 3rd glasses of wine, you know they are having a great time and your restaurant is making a profit.

Another student brought up a recent article in The New York Timesabout encouraging wait staff to take pictures of their guests to post across Social Media platforms. Burke noted that this concept is much like what jeans used to be in the dining room – simply not allowed at most high-end restaurants. However, as time goes by, more restaurants are allowing a dressed-up version of jeans with a jacket, and slowly the same thing is happening with social media.

If you are dining on the Upper East Side with a more sophisticated crowd, you may not get your picture taken, but if you are grabbing a bite after a spree at Bloomingdale’s, your purchase may not be the only lucky token you are bringing home. Executive Food Editor at Martha Stewart Living, Lucinda Scala Quinn will be joining us next Thursday, October 25th to give a glimpse into food media.