One of ICE’s new chefs shares his culinary career journey.

I’ve been surrounded by two amazing cooks. My dad is a chef, who’s been in the business for over 35 years. My mom is a great cook. If I’m away for a long time, I just want my mom’s cooking. She’ll ask when I’m coming over because she knows how much I love her food.

I was lucky enough to go to Long Island City High School, which had an amazing program that gave me the opportunity to study auto mechanics. I fell in love with a girl in high school and as the relationship grew, she wanted me to support her in the things she was interested in. She persuaded me to join a cooking class with a company called C-CAP, Careers Through Culinary Arts Program, and they give scholarships to kids who excel at cooking. I was fortunate enough to get into the program, winning a full scholarship to the Culinary Institute of America at age 16. I’m very grateful to have found a passion while I was young.

Growing up I always loved the attention that I was getting by making people happy. It felt natural, it didn’t feel like I was trying too hard or over achieving. I was getting all this praise and I thought, wow, I’m not even trying 100%. What if I do?

Excited to go to CIA, I became the first person in my family to graduate college. My parents are both immigrants from the Dominican Republic, both had two jobs and both worked their butts off to make sure we had everything we wanted. I didn’t realize until I was a little bit older that I grew up poor. I was born and raised in the projects and it wasn’t the easiest of times. I didn’t know that we were on welfare. I didn’t know that we were struggling because my parents never let us see that. I’m very grateful for my parents. I am the man I am today because of the hard work of my dad and my mom, who taught me how to be a gentleman and respectful, and I got the best of both worlds.

After graduating from CIA, I wanted to be the best. I worked with some of the best chefs in America. I worked with Daniel Boulud at Restaurant Daniel. I worked with Alfred Portale at Gotham Bar and Grill, which was my first job after school. I worked there as an intern and was offered a full-time job, so I stayed for three years. Then I started working at a New York City landmark called Cafe des Artistes. I became a sous chef at age 19, which was pretty exciting but nerve wracking. I felt that I was moving a little too fast but I knew that I was putting in the hard work. I was always the first one in the kitchen and the last one to go home. I had the energy; I was a sponge, ready to soak everything up. 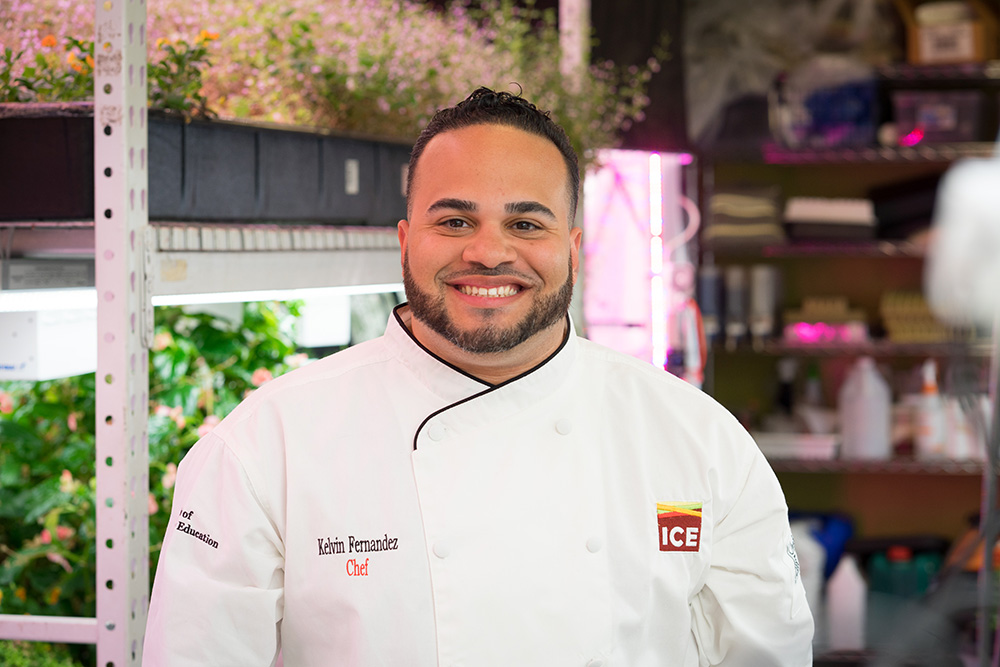 When I was 22-years-old, the general manager of Cafe des Artistes was going on to a new restaurant and he offered me the executive chef position. I said I wasn’t ready. I had a mentality that to be a chef, you have to know everything to answer the questions your cooks ask. He said, “If you feel like you’re not ready, you’re never going to be ready. You will know every answer to every question because it’s going to be your food and your recipes, so you better know your food.”

He was right. I took the opportunity and it was one of the high points of my life. I remained the chef at Antipasti Restaurant and Wine Bar for about two years before I decided to come back to the city from Westchester. It was very important for me to fine tune my skills in New York City, but I was the youngest guy applying for executive chef jobs. Everyone around me was in their 40s, and I was always called “the kid” because every time I did a tasting for someone for the position, they’d say, “I can’t believe this food is coming from this kid.” I saw it as a compliment, put a chip on my shoulder and knew I had to work twice as hard to prove myself.

I did a tasting for a brand new, small boutique hotel called The Strand, which had 180 rooms and a beautiful rooftop overlooking the Empire State Building. There was a position for an executive chef job, I tried out, they loved my food, and they were honest enough to tell me that they thought I was too young to run a hotel. But they loved me so much that they created a chef de cuisine position for me, so I was in charge of the restaurant and an executive chef was overseeing the hotel. Within eight months, they fired that executive chef and promoted me to executive chef. I was so ecstatic and it proved that hard work does pay off.

8/8/11 my episode of chopped aired! 6 years so much has happened thank you for everyone supporting me! ❤️ #cheflife #foodporn #chefkelvin #chopped #foodporn @foodnetwork

In 2011, I did my first show for the Food Network, “Chopped.” I finished as a runner up and was known as the guy who was allergic to shellfish but had shellfish in two rounds. So I made it to the finals without tasting my food. That was a win already. I cooked my heart out on that show and got a lot of great feedback. I became the king of pilots at Food Network — I’ve done more than 12. They love my energy, the way I explain food and my competitiveness, which is exciting for me. As the years go on, goals change, but the more TV I do, the happier I become because I’m comfortable in front of a camera and I like to teach. It comes full circle.

I did a few more shows, including “Man vs. Child,” on which I went up against some kid proteges and won. It was a lot of fun to see the next generation of chefs. When I was growing up, we didn’t have this celebrity chef. The only person we had was Emeril Lagasse and Food Network was brand new. Now you have all these kids who find their passions when they’re so young. I can only expect how exciting it will be to see what the next generation of chefs will be like. Then in 2015 I went on “Beat Bobby Flay,” which was amazing. I got the opportunity to go against Mr. Iron Chef himself, and I won with battle arepa, which is something that’s dear to me. It was the first Latin dish that I’ve ever created. I’ve done French, American and Italian, and here I was showcasing my Latin food and I got to beat Bobby Flay with it. It really took my career to the next level because I started focusing more on Latin food with a twist, which is what I do now.

I was also named a Forbes 30 under 30 chef, which has been another milestone. As a successful chef, I always want more. I believe it’s not about what I’ve done, it’s about what I continue to do. That’s what pushes me and keeps me going. I’ve also won the food and wine competition that Forbes has every year. I’m the defending champion for the past three years with three different arepas, so I really think I should open an arepa bar sometime down the road.

I’m a partner at a rum bar called Las’ Lap on the Lower East Side, the only place where you can have my food right now. It gives me an opportunity to freelance with my own business called Kelvin’s Kitchen. Just yesterday I cooked for the New York Yankees. Alex Rodriguez and Jennifer Lopez are some of my top clients. That’s where we are now, when I get to have this awesome partnership with the Institute of Culinary Education and see what we can do together. Stay tuned for my work with ICE.

What a beautiful journey. If you ever consider teaching a kids cooking class please let the world know.