“The Italian language wasn’t passed on — but the food definitely was,” says Chef Frank Proto, ICE’s newest career program instructor, on his Italian-American upbringing in Long Island. Since childhood, Frank received a firsthand education in Old World cooking methods: homemade sausages hung to dry from bamboo in the cellar; wine made from Grenache grapes purchased at the Brooklyn Terminal Market.

It’s no surprise that once he became a chef, Frank gravitated toward unfussy Mediterranean cuisine made with the highest quality products. At the outset of his career, Frank found a mentor in renowned Chef Joe Fortunato, now chef/owner of the West Village mainstay Extra Virgin. Chef Frank not only rose through the ranks in Joe’s late restaurant Layla, he helped him to build new restaurants from the ground up, and went on to do the same with restaurateur Marc Murphy, too.

When the New Haven restaurant Barcelona needed an executive chef, Chef Frank had the chops to take the helm. Young chefs who have had the opportunity to work with him, and now ICE students, would be lucky to call Chef Frank a mentor.

With an affable, encouraging disposition, he’s the kind of chef that makes you want to work harder and better because his passion for cooking and his high expectations for others who have chosen a culinary path are clear. Chef Frank plans to use his straightforward approach and decades of restaurant experience to teach ICE students how to succeed in the culinary industry and how to prepare delicious, uncomplicated food.

On a recent Thursday, after introducing a class of culinary students to Lombardy cuisine, Chef Frank and I sat down to chat for ICE’s “Meet the Chef” series.

My dad’s side of the family is Italian-American. And though my mother’s side of the family is German, she learned to cook from my paternal grandmother. So I grew up with Italian-American traditions, like making wine and sausage. We still make our own tomato paste — it’s a process I’ve never seen anyone else do. We dry the tomatoes, we peel them, remove the seeds then dry them in the oven for 48 hours until they’re brick red — it almost looks like a brownie.

Do you still make sausage?

I made sausage in the restaurants where I worked. I’d like to get back into making dry sausages at home. We used to make the sausages then hang them on bamboo in the wine cellar to dry out, because the temperature is perfect in there. We’d dry them out and put them in old, glass mayonnaise jars, then top them with olive oil so they’d store well. Then you peel the skin off and eat it like a salumi. 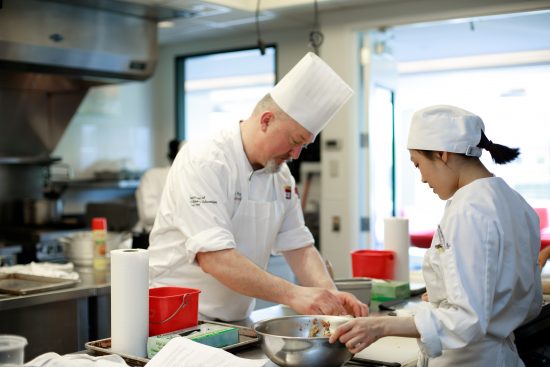 What was your first restaurant job?

Back in the 70s, when people were eating canned stuff, my mom always had fresh vegetables, and not for health reasons — that’s just the way my grandma taught her. You go to the store, you buy vegetables and you make them. You don’t get them from a can. So we had a lot of good food as kids.

Tell me about your decision to enroll in culinary school.

I had gone to community college for two years to study restaurant management. For me, culinary school was the next step. So I enrolled at CIA [Culinary Institute of America].

What was your first job out of culinary school?

I did my externship at Tribeca Grill, but my first job out of culinary school was at Layla. It was a restaurant that served Middle Eastern and Mediterranean food. That’s where I met my mentor, Joe Fortunato. I worked up the ranks and became sous chef there. Then I moved around with Joe and I also worked on and off with my other friend Marc Murphy. When Joe was opening something, I’d help him open it, when Marc was opening something, I’d do the same. When I started working with Marc, I helped him open Landmarc and Ditch Plains. I was the corporate chef.

What does being corporate chef entail?

Doing everything. We did all the menus together. I was the operations manager and he managed the big picture. I trained chefs, cooks, planned menu changes, specials. I managed costs, all of the ordering systems, basically building everything from scratch. When I left, we had two Ditch Plains and two Landmarc locations. 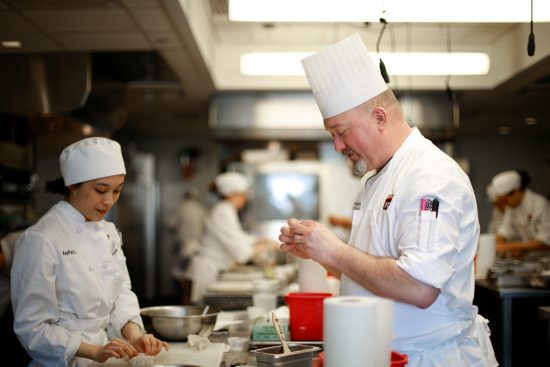 Did you choose Joe as a mentor or did he choose you? How does that work?

It was kind of mutual. He wouldn’t have been my mentor if I did a crappy job. I’m a bit of a bulldog in the kitchen. I come in, I work hard and I’m quiet. Maybe he saw something in me. By him just pushing me along, he became my mentor.

Eventually he moved me up to sous chef. At that point, he knew what I could do. It goes both ways. There are a lot of guys who I chose to mentor when I was working as a restaurant chef. They get chosen because they have the work ethic and the passion for it. You say through your work if you’re worth being mentored.

What would you say is your approach to cooking?

I like simple. Don’t get complicated. A lot of people like to put a lot of stuff on the plate. Sometimes, the less you put on the plate, the better. A lot of young cooks do that before they have experience. Joey always used to ask, “Do we really need to put that on there?” I like to keep everything simple. The last restaurant I was working in, Barcelona in New Haven, was a joy because we’d cook a piece of fish on the plancha and serve it with a good salsa verde. That’s the way I like to cook.

I also like Middle Eastern and North African ingredients — the spices, pomegranate, molasses… the mezze. Even before small plates became the big thing, I always liked small plates. I don’t like committing to just one thing. I don’t play golf because I can’t commit myself to five hours on the golf course. That’s how I feel about a meal, and cooking, too.

What are you excited about teaching ICE students?

Other than that, I want the food to taste really good. I want students to walk out of here knowing they’ve made some really good meals. I also want them to walk out of here with as much information as possible about working in the real world, and I’ve tried to include that in every lesson I’ve taught so far. Things like: when you go into professional kitchens, there’s not going to be a ton of paper towels like we have at the school; the less pans you use the better — I want to teach them the nuts and bolts, together with the substance of the lesson.

What advice would you give to culinary students starting their careers?

Show up early. Show up prepared. I always tell my cooks, If you come in 10 minutes early and ready to go, you already stand out. There are ways to stand out that take no effort at all. When I was a culinary student, I read and got as much information as I could about food. That’s another thing: be an information seeker. Learn your craft. I read every day still, after 20-some odd years. There’s always something that interests me.

What do you read?

I read the Eater newsletter every day, I read Saveur, Food52, even the home cook-focused outlets like Bon Appétit. I like to see what they’re doing. I’ve always got the New York Times in my bag. I’ve been going to the public library more, too. It’s such a great resource. I also collect old books. I bought a copy of Larousse Gastronomique and a Fannie Farmer cookbook in the Berkshires last week. 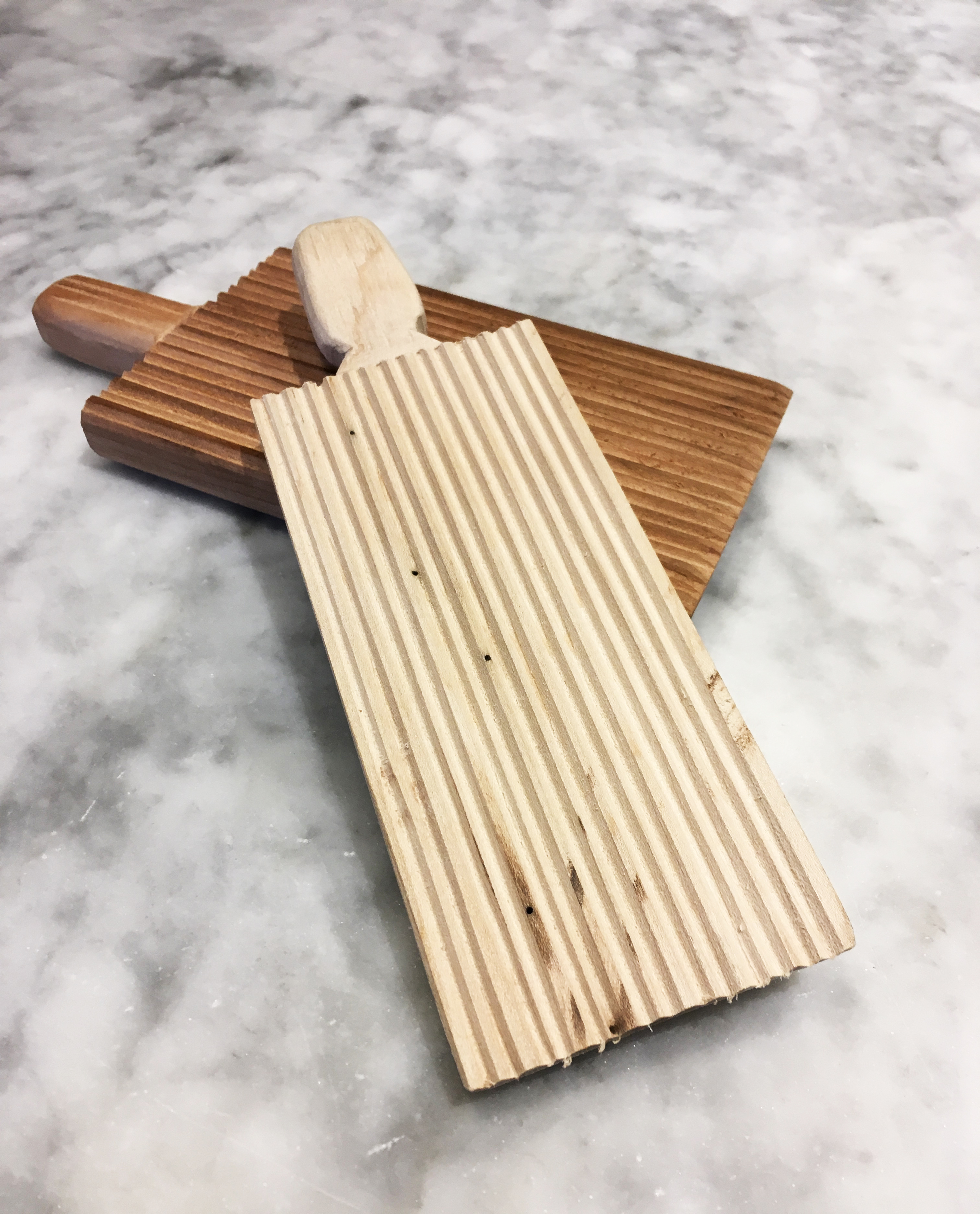 What are your favorite things to do outside of the kitchen?

I have a workshop. I’m just starting to build it up. I really want to learn how to forge. I brew beer. My son and I just brewed beer last year and we’re doing another batch soon. Most of the things are food-related. In my workshop, I made gnocchi boards out of wood. I give them to friends.

Ready to hit the ground running on your culinary career path? Click here to learn about ICE's career programs.