A New Cookbook from the ICE Community

Chef Kathryn, who takes annual excursions to taste her way through the best pastry kitchens and neighborhood bakeries of France, has a deep knowledge of French culture and food, particularly the sweet side. The cookbook takes readers on a journey through classic and innovative recipes for macarons, financiers, tartelettes, petits fours and much more.

But the idea behind petit sweets isn’t just about moderation—it’s also about choice, as Chef Kathryn explains, “[What] I appreciate when making two-bite desserts is that my guests can try more of them. There’s no need to chose, and that allows me to cater to more tastes at once.”

From Armagnac-vanilla cannelés to banana-brown sugar madeleines, Chef Kathryn’s cookbook is a comprehensive and creative guide to tiny French confections, replete with baking tips from the chef herself, who has measured, mixed and baked these recipes more times than she can remember. In anticipation of Chef Kathryn’s book release party on October 10, I sat down with her to chat about the making of Les Petits Sweets. 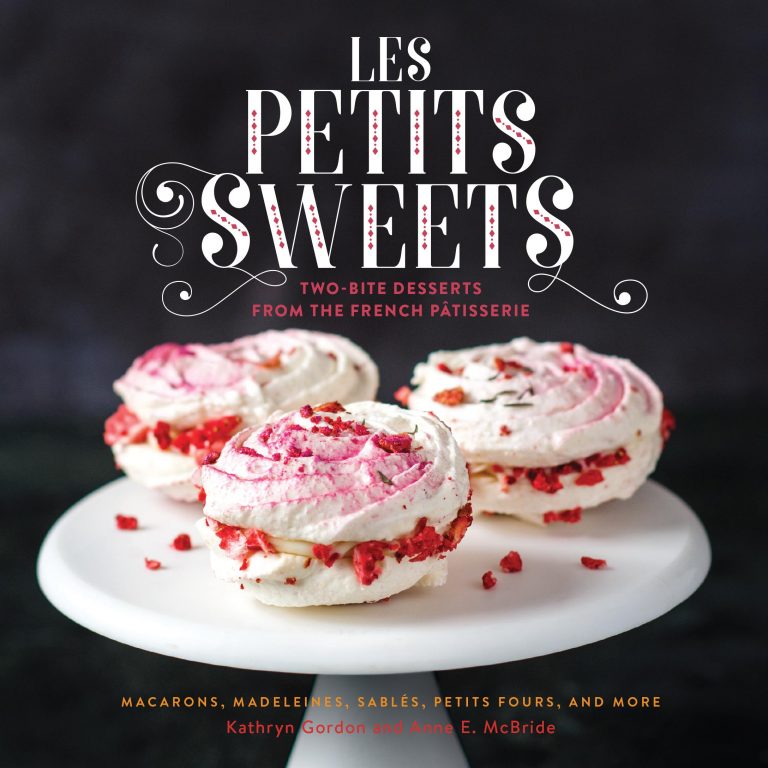 What was the inspiration for your new cookbook, Les Petits Sweets?

It was a follow up to my first cookbook, Les Petits Macarons: Colorful French Confections to Make at Home. The sweets in this book are the same size and have the same vibe, but the new art director gave the book a fresh take with color changes and some old-fashioned flower prints—the French look.

What’s your process for deciding what to include in your cookbook?

I start by making lists, usually just scribbling on paper. Then I start typing it up, seeing the gaps and fleshing it out. Then I make flavor lists. This time, I made a chart and it helped me balance the recipes—like I decided I couldn’t have so much raspberry, a very French flavor.

When we started writing, we had to decide how to organize the chapters. The second book is so broad that we ended up having more short chapters and a couple recipes in each. Sometimes I would realize we didn’t have enough recipes in one chapter, like financiers, so I came up with the cashew-curry financiers and they’re really good. Just slightly sweet.

The French are known for the classic petit fours, especially at a fine dining restaurants. It’s the equivalent of the after-dinner red and white mint. I’ve had to make petit fours at various places I’ve worked. Once when I was working at Tavern on the Green, a waiter was sent to the pastry section to ask for the petit fours and he clearly didn’t know what they were, so he asked for the “Betty Fords.” I finally figured out what he meant. To me, petits fours include the classics like financiers but also candy, chocolates and cookies. It’s to give people just a little something extra.

Do you have a favorite petit sweet?

When I go on field trips with students, I like to get cannelés (can-uh-lays) because no one really knows what they are. There are cannelé recipes in the book and a lot of them have classic flavors like vanilla and rum, but I also wanted to play with the flavor profiles. I used Armagnac because I really like it as a brandy.

When I was making the lists of French flavors, sometimes I realized I had too much of one flavor, like orange, so I had to branch out to other flavors like tangerine. I would go around to different pastry classes and ask the chefs for French flavors, to make sure I was covering them all. I like flowery things and Anne [McBride, the co-author] likes St-Germain so we used that for one recipe. I like the tea flavors like lapsang souchong too, so I steep that in the milk for another recipe.

I had never made cannelés before writing the cookbook; but I had eaten them and knew I liked them. I wasn’t sure about things like whether I’d have to chill the batter overnight. But I found out that if you make them right away, your cannelés would have different heights. Letting them chill and hydrate overnight gives them uniformity. The book tells you that.

What’s the recipe you tested the most times?

How many times did you test them?

At least. I can tell you based on that, that if you’re at sea level and want to make your macarons less sweet, you’re better off pairing your macarons with something tart, like curds or ganaches, because you can’t indefinitely take out the sugar because the feet won’t form at sea level without sugar. (Feet = the ruffles on the edges of the macarons.)

You have a whole chapter dedicated to madeleines? Any advice for making them?

I like whipping the eggs and the sugar together into a ribbon, so the madeleines have really good structure. If you want that rounded bit, you have to rest your batter overnight. You have to have a really hot pre-heated oven, and if the pan is hot and the batter is cold, you’ll get the best temperature shock and that helps create that puffed shape.

Reprinted with permission from Les Petits Sweets © 2016 by Kathryn Gordon and Anne E. McBride, Running Press, a member of the Perseus Books Group.

Tell us your favorite petit sweet in the comments for a chance to win a copy of Les Petits Sweets! Winner will be announced on October 10.*

*Winning entrant's shipping address must be within the continental United States.

Halloween Treats for Kids to Make