In today’s highly visual world, pastry chefs can stand out with unique sugar sculptures. “I notice that people remember me more for my airbrush than my cake,” says Master Pastry Chef Stéphane Tréand, M.O.F. with a laugh. The recipient of the prestigious Meilleur Ouvrier de France, (M.O.F.), which means “best craftsman in France,” can’t wait to share his techniques with students who attend his Sugar Showpieces workshop this September 23-25 at ICE.

Tréand believes that anyone can create their own work of art if they put in the time. “Sugar work is not only for chefs, says Tréand. “It's for everybody. Hopefully I can fill up the class with artistic amateurs.” Students will learn airbrushing, casting, pulled ribbon, pulled sugar flowers and much more.

Tréand advises beginners to use silicon molds, work with isomalt, wear plastic gloves and use lots of stencils when airbrushing. He’s also noticed a trend in the United States to build showpieces that can stand as tall as seven feet high, but he suggests that newcomers start slow with mini showpieces. And as with any craft, attitude is everything. 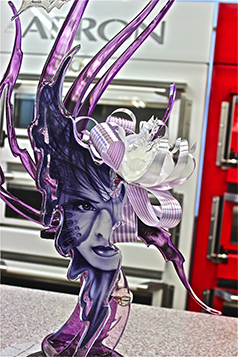 “My philosophy is never give up, share and always want to learn,” says Tréand. “You have to be curious. You can always improve the way you’re doing pastry. Believe me, I’m still learning.” Tréand discovered sugar showpieces in the 1970s when he saw another chef construct a Singer sewing machine made entirely of sugar. “I was very impressed by how the cast iron was made of sugar,” said Tréand. “I was like, ‘Wow, how can you do that with sugar?’ I remember thinking that if I do something theatrical, like a showpiece, people will remember that, because it's visual.”

Since most showpieces in the mid-80s were replicas of existing objects, like the Eiffel Tower, Tréand focused on more abstract shapes to distinguish himself. Today, Tréand finds inspiration for designs everywhere. “Driving on the freeway sometimes you see a structure and say, ‘Well, that's a nice bridge’ and of course the background we have in France is of beautiful churches or art from the last few centuries mixed with European art deco,” says Tréand.

“There are many things that we mix. Some chefs even find inspiration in tribal tattoos.” Tréand warns that sugar sculptures should not get “too weird” though. “People like to recognize what it is,” says Tréand. “You always need to be careful and do something that people can find themselves in.”

He’s practiced his own advice to great success. Tréand was named one of Dessert Professional’s Ten Best Pastry Chefs in America in 2007 and 2008. In 2009, he coached the bronze-winning USA team (which consisted of three of his former assistants) at the International Pastry Competition in Tokyo. Currently, he’s the executive chef consultant for Occitanial, a pastry shop in Tokyo, and he runs his own school in California, Art of Pastry Academy.

The greatest moment of Tréand’s career, however, remains the day he earned his M.O.F., the highest title anyone can get in an artisan manual trade in France. “That’s my first moment of pride in my whole life,” says Tréand. ”I got it after three tries. My first final was in 1997. I failed. I failed again in 2000 and finally I got it in 2004. When you get it on the third time, it's even more important because you know the value of it. Finally you’ve got it, and you know you’ve got it forever.”

Tréand finds that his students feel their own sense of pride when they complete their first showpieces. “When they do something and realize, ‘Oh my goodness, I did that with my fingers and it's pretty nice,’ they feel proud,” says Tréand. “They feel happy and that's all we need, just feeling happy.” Tréand is grateful he discovered the artistic side of pastry because it gives him the chance to do something new every day. “I think it’s fun,” says Tréand. “It’s freedom. It’s creation.”