Leading the Sweet Side of La Sirena

On a Tuesday evening in the midst of September Fashion Week in New York City, I meet Thea Habjanic (Pastry Arts '10) at La Sirena, the buzzy new restaurant in the Meatpacking district of Manhattan where Thea leads the sweet side of the kitchen as executive pastry chef.

Given the restaurant's location and the unseasonably warm weather, it will no doubt be a long night for Thea. Still, she seems poised and unhurried as I have her stand for a handful of portraits in her kitchen attire. In a professional pastry kitchen, where technical skill is only half the battle, it takes a certain personality type—one that can stay focused on the details through an onslaught of tickets, demands and the occasional snafu—to truly succeed.

Thea has the qualities to thrive in the restaurant world—though that wasn’t always her career path. She graduated from NYU with a degree in journalism and worked for several years as an entertainment writer before deciding to enroll in the Pastry & Baking Arts program at ICE. 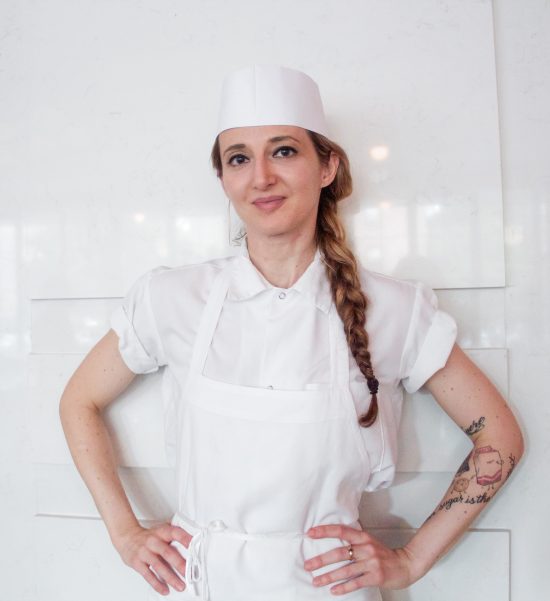 As her recent kitchen roles can attest, Thea has the demeanor and the work ethic suited to fast-paced restaurants. Said ICE Creative Director Michael Laiskonis, who hired Thea for her first pastry gig at Le Bernardin, “Last year, I signed on to create the pastry program for the newest Mario Batali and Joe Bastianich restaurant, La Sirena. When it came time to hire a pastry chef for the upscale and busy restaurant, I immediately thought of Thea. Her previous experience in both fine dining and high volume made for a perfect match. She has played a vital role in crafting La Sirena’s desserts, earning critical praise. She runs the hectic pastry kitchen with that positive, can-do attitude that initially impressed me!”

Thea was kind enough to pop out of the pastry kitchen and share with the ICE blog a glimpse into her daily life and her path to ICE.

Describe a typical day in your life.

I start every day with an iced latte; whether it’s cold or hot outside, I need my iced latte. I don’t drink drip coffee—it has to be espresso with cold milk. I’m a big yogi and I do yoga six days a week, so that’s usually where I go before work. I typically go to work in the early afternoon.

I’ll check in with the staff that have been doing production and see if they have any questions and if we have everything for the day. Then I’ll talk to the executive chef and see what’s in store for the night—if we have any parties and how many covers. After that, I’ll do some production and work on recipe development or specials for the day.

We have a pre-shift meeting where the whole FOH and BOH discuss protocol issues or specials for the day. From there, it’s pretty much service all night. We have more time to set up in pastry—we won’t normally get our first ticket until after 7:00 p.m., so we have time to get our stuff together.

You hear the kitchen come alive on the savory side around 5–5:30 p.m. and we catch up eventually. But then, of course, pastry is always the last in the restaurant because we finish much later. I run the line, plate, make sure everyone is sending out all the dishes correctly. I’m very hands-on—I’m not the kind of chef who will leave early and let the cooks handle everything. I like to stay until the end. I still help clean and scrub.

How did ICE prepare you for being a pastry chef at La Sirena?

One of the first things I remember learning at ICE was something that my teacher Nicole Kaplan said: "Nothing about restaurant life is glamorous, so if you’re into a fantasy about this being a prissy job, then you’re going to be disappointed." She was 100% right. ICE was awesome.

I made great friends and learned so much. If you’ve never worked in a restaurant before or in the culinary field, they give you a foundation for what the life is really like. Because I think people have no clue. It’s hard work, a lot of hustling and long days. It’s a bit of a masochistic job. But people who go to school and end up working in this field have a lot of drive and ambition. They love what they do.

How did you land your first externship at Le Bernardin?

I had been there once as a child—my parents had a wedding anniversary dinner there and I tagged along. When I was looking for externships, I didn’t know if I wanted to work in a bakery or a restaurant, and I thought of that dinner at Le Bernadin.

I looked up the pastry chef [Michael Laiskonis] and I found out that he was very well known and respected. At the time, I didn’t realize what a pastry celebrity he was. I wrote him an email, he responded and the rest is history. I went in for a trail and it went well. I think Michael saw something in me that he believed in. He’s been my mentor ever since.

Nothing about restaurant life is glamorous, so if you’re into a fantasy about this being a prissy job, then you’re going to be disappointed. 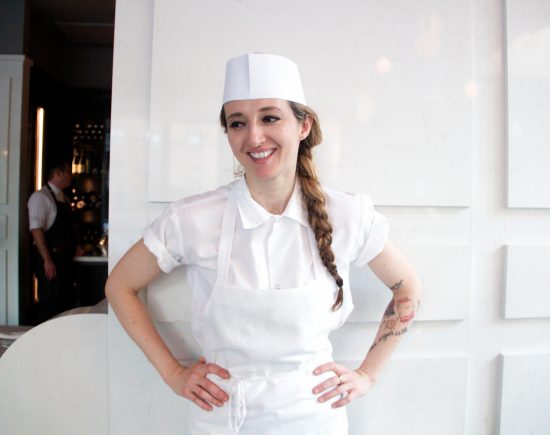 My dad was a chef. He owned a couple of restaurants on restaurant row on 46th street, so I grew up going there with my mom and I saw the business firsthand. He always encouraged me not to work in restaurants because it’s very hard. But we were always a big cooking family—we cooked dinner every night. Food around the table was always a big deal.

Initially, I didn’t think of it as a career. I went to NYU, got a journalism degree and did that for several years. But then a bunch of life changes happened and my ex-boyfriend was always encouraging me to go to pastry school since I used to bake all the time. Then I finally did it. I totally changed careers.

Thoughts on the current culinary landscape?

It’s so vast and broad. I think there’s something for everyone out there. But there’s not a lot out there that hasn’t been done before. People always ask me: what’s your favorite food to make or what’s your specialty? I think that’s a silly question because I don’t have a specialty. I love to make everything. I love to make things that taste good and are beautiful.

In pastry, you’re leaving the last impression on a diner in your restaurant. You want them to look at the plate and say “oh my gosh, that’s so pretty.” But in the end, I want the plate to taste better than it looks.