Kristin Donnelly wanted to get into food media but didn’t know how. Then she came to ICE, which kick-started her career path. Now’s she’s written two cookbooks and co-authored another two, including the recently released “The Chef’s Garden: A Modern Guide to Common and Unusual Vegetables.”

When people ask Kristin Donnelly what she does for a living, she racks her brain to think of an all-encompassing answer. She works in food media, but that includes a lot. As a seasoned recipe tester, cookbook author, digital publishing veteran and copywriter, Kristin says, ultimately, she helps food brands tell their stories.

Kristin graduated with a degree in media studies from The Catholic University of America in Washington, D.C. After that she took some odds jobs, one as an administrative assistant for an engineering firm and another in public relations.

“I knew I wanted to get into food media, but I didn't necessarily know how,” she says. "And to be honest, I expected it to take a lot more time to try to figure that out.”

Kristin was cooking a lot for fun, and a friend had recommended she go to culinary school. Soon she decided to follow her passion, leaving her odd jobs behind and heading up the coast to enroll at ICE New York.

The ICE alum said that the Culinary Arts program helped her understand the discipline of professional cooking, and that the school’s Career Services team helped introduce her to the world of food media.

ICE’s Career Services team connected Kristin with famed chef and cookbook author Lorna Sass, who was working on a new book. Twice a week Kristin would go to her apartment and help test recipes. 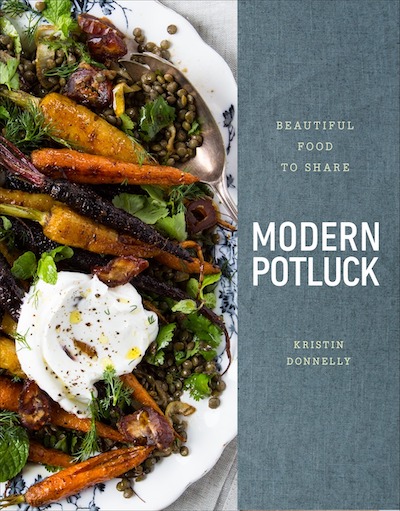 “Taking advantage of the Career Services office is really great,” Kristin says. “I remember when I first graduated, I was always looking at the emails with the jobs [listings]. There were some things in there that you wouldn't find elsewhere.”

Kristin landed an externship at Food & Wine magazine, where she was eventually hired full-time after graduation and would work there for eight years. She’s been freelancing ever since, copywriting for brands like Blue Bottle Coffee, publishing recipes for outlets like Epicurious and, of course, authoring four cookbooks.

Her two solo ventures are the “Modern Potluck,” a 100-recipe guide of crowd pleasers, and “Cauliflower,” which is dedicated to the vegetable’s versatility.

And Kristin has co-authored two more cookbooks, including the recently-released, 600-page “The Chef’s Garden: A Modern Guide to Common and Unusual Vegetables” with Farmer Lee Jones. She’s also working on a cookbook with Caryl Levine and Ken Lee of Lotus Foods tentatively titled “Rice is Life,” that’s slated for a 2022 release.

While she was at Food & Wine, Kristin signed with a literary agent in 2007 and her cookbook journey began. Almost 15 years later, that agent got Kristin on the list of possible co-authors for “The Chef’s Garden.”

“That's the typical process. The person who wants to do the book will meet with a few different writers, and then they decide which writer they want to work with,” Kristin says. “And there have been plenty of books that I've interviewed for and not worked on. So [for] that one, we just had good synergy.”

But you don’t have to have your name on the front cover to be an integral part of bringing a cookbook together. Kristin’s held supporting roles on at least nine other books.

She says cookbook authoring can be a solitary process, and since there are often hundreds of recipes to develop and test, authors are often in need of helping hands. Simply reaching out to your favorite authors, food bloggers or anyone else in the recipe testing game can be a good way to get your feet wet.

“Don't be afraid to reach out for informational interviews," Kristin says. "I would reach out to multiple people to see if they needed help with anything, and wouldn't get offended if I didn't hear back."

Just as she was paired with Lorna Sass, Kristin brought in an ICE graduate who was looking to try out recipe testing. For anyone looking to follow a similar path, Kristin says it’s important to have your measuring tools — kitchen equipment like scales and rulers — to help you become an expert recipe tester.

“Recipe testing is very different from cooking in that you've just got to be really present and really careful and follow things as written,” she says.

Pursue your passions in Culinary Arts at ICE.