Food is essential for commemorating the emancipation of the enslaved.

ICE alum Adjoa Kittoe shares the story behind Juneteenth and her plum cobbler recipe to celebrate and reflect with red food.

Juneteenth is a day of celebration and reflection, commemorating American history, current events and the future. The amalgamation of “June” and “nineteenth,” recognizes when General Gordon Granger announced the following in Galveston, Texas, on June 19, 1865:

The people of Texas are informed that, in accordance with a proclamation from the Executive of the United States, all slaves are free. This involves an absolute equality of personal rights and rights of property between former masters and slaves, and the connection heretofore existing between them becomes that between employer and hired labor. The freedmen are advised to remain quietly at their present homes and work for wages. They are informed that they will not be allowed to collect at military posts and that they will not be supported in idleness either there or elsewhere.

This historic event is celebrated in 48 states as an official state holiday or observance, beginning with Texas in 1980, and New York City made it an official city holiday in 2020. This week, the Senate and House passed a bill to make Juneteenth a federal holiday, and President Biden signed it into law on June 17.

Red food is not purely coincidental, it's intentional, purposeful and meaningful. Red soda, watermelon, red lemonade and red velvet cake are some examples of food consumed during this time. In Africa, red is the color of transformation, regeneration, life, death, strength and spirituality. In West Africa, red also symbolizes sacrificial rites and bloodshed.

For this Juneteenth, I'm celebrating with a plum cobbler, flavored with cured sumac and Ceylon cinnamon. The flavors are similar to a tart cherry pie, and the dessert is bright red like the Juneteenth and Pan-African flag. 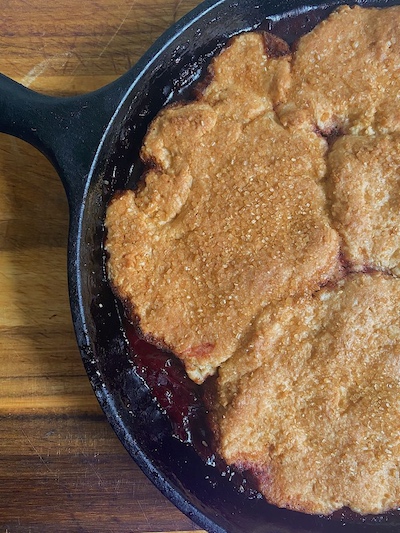 For the biscuit topping:

As a non-cooker, I think I’ll be able to make this!

Can’t wait to show my husband.

The Culinary Traditions of Kwanzaa