Last week, DICED brought you the story of ICE students, alumni and instructors' holiday visit to Streets International in Vietnam. While that was certainly a highlight, the group participated in many other activities during their nine-day trip. Here is a look at their time in Ho Chi Min City.

The group arrived in Ho Chi Min City after a grueling two days of traveling, including a flight on Christmas Eve. (Luckily, Director of Student Affairs Andy Gold was on hand to play Santa and give everyone a bag of chocolates during the flight.) After four airline meals, the group craved only one thing, the most famous of all Vietnamese foods, pho.

The group’s tour guide told them about a place that former President Bill Clinton ate at, Pho 2000. On the corner of a busy intersection was a huge sign that said “The President’s Favorite Pho.” The ICE group sat down and ordered four bowls of pork pho and four bowls of chicken pho. To wash it down, eight orders of weasel coffee — thick, rich Vietnamese drip coffee made even richer with sweetened condensed milk.

Chef Andy said, “We couldn’t wait for our pho. We each had a big bowl of steaming broth and noodles placed in front of us, with thin slices of meat shingled across the tight swirl of noodles. Small plates of sliced birds’ eye red chilies as well as bowls of spicy basil and mint sprigs were also out in front of us. It did not disappoint.” 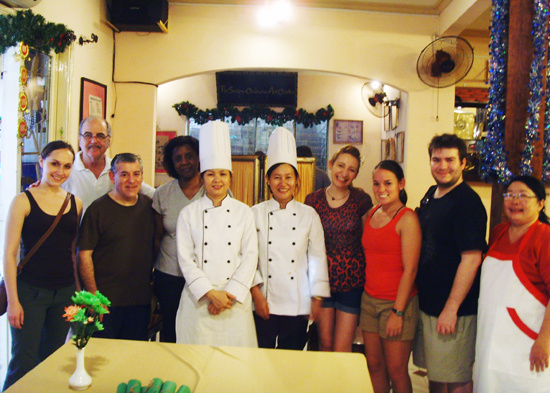 After pho, the group began their culinary experience in Vietnam by going to a large traditional market, the Ben Thanh Market. They visited food stalls with Chef Binh, who used to work at the famous Hotel Majestic. She shopped for local ingredients and supplies with the students, explaining everything culinary along the way. The group then prepared lunch back at the Saigon Culinary Arts Center in a class designed for professional hotel and restaurant chefs in Vietnam, a memorable way to begin learning about the modern cuisine of Vietnam. 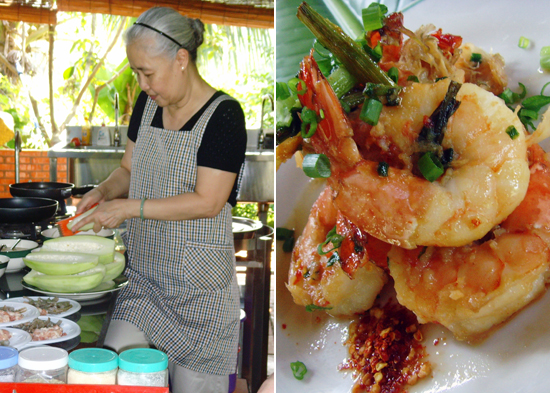 The next day, the group was again able to learn from a leading Vietnamese chef during a cooking class at the home of Chef Cam Van, a culinary educator on HCMC Television, a devout Buddhist and a world-class chef. Her kitchen was a raised platform with a roof that housed long tables with a dozen gas-burner cooking stations. Before they started they went into her temple and had tea in the beautiful space. After being instructed to all wash their hands, they began to participate in a hands-on demonstration and cooking of typical Southern Vietnamese dishes. 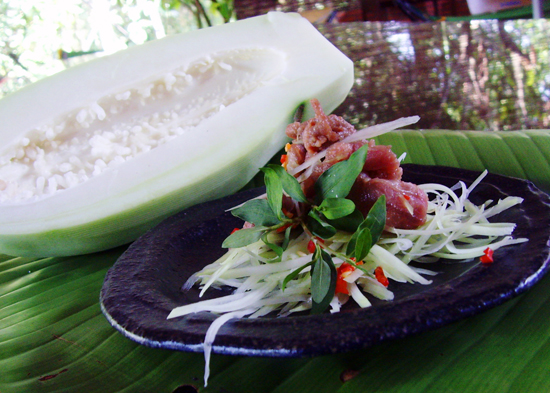 The group made a traditional green papaya salad served with sliced beef tendon. To serve on the side, they made nuoc mam, a traditional sauce made from high-quality fish sauce that is heated with sugar, rice wine vinegar, water, garlic and of course, sliced hot red peppers. They then made a dish of shrimp with lemongrass, chili and garlic, served with rice.

After this, they made the famous dish Banh Xeo — a thin crispy pancake of rice flour, water and turmeric, laden with sliced pork, shrimp and bean sprouts. They were shown the proper technique of rolling the batter around the hot pan, dripping off the excess, and adding extra oil around the edges to crisp it up, all while rotating the pan so that the oil and crêpe were always on the edge of the flame. 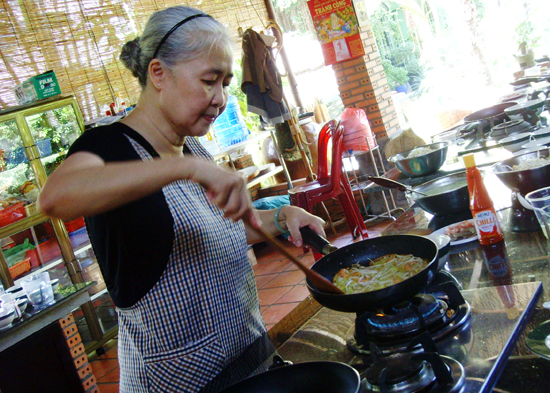 At the exact right moment, when it was at its dark golden and crispy perfection, the Chef demonstrated how to fold it over in a half-moon shape, drip out the excess oil and slide it onto a plate. In the words of Chef Andy, “Does Nirvana mean anything to you?”Interested in experiencing the cuisine and culture of Vietnam?

ICE students and alumni will travel to Vietnam again this July. Check out the itinerary here.