A Globe-Trotting Chef Finds a Home at ICE

With the heart of a globe-trotter and a passion for lifelong culinary education, Lourdes Reynoso (“Chef Lorrie”) is always up for an adventure. Whether she’s stationed in St. Petersburg for a three-month teaching residency or exploring the best parrillas in Buenos Aires, Chef Lorrie is continually feeding her voracious appetite for foods and cultures of the world. She shares both her global perspective and her expertise in international cuisines with the culinary arts students at ICE. 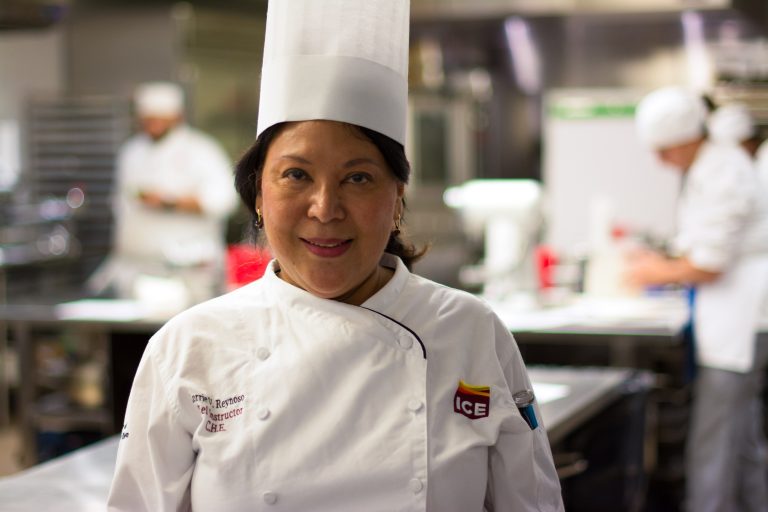 After receiving a bachelor’s degree in world history, Chef Lorrie earned the prestigious Grand Diplôme from Le Cordon Bleu in Paris. She remained in Paris to study the French language at Le Sorbonne and art history at the Louvre museum, before returning to Manila to join the teaching staff at her sisters’ culinary school. Her ultimate career path came as no surprise to her family.

“Even when I was in high school, I was teaching children’s baking courses during the summer,” says Chef Lorrie. Teaching in the kitchen was her calling from a young age. Drawing upon the classical French techniques she learned at Le Cordon Bleu, Chef Lorrie taught culinary arts in Manila for several years.

When she wasn’t in the kitchen classroom, she was traveling—feeding her second passion for discovering new foods and cultures. The opportunity arose to teach at the New York Restaurant School (now The Art Institute of New York City) and Chef Lorrie jumped on it.

Asked about the intercontinental move, Chef Lorrie recalls, “I wanted to be in New York. At that time, it was just becoming the food capital of the world and a true melting pot.” She continued to teach there for twenty-one years, helping to train such prominent chefs as the current executive chef of Nobu, Ricky Estrellado, who considers Chef Lorrie a mentor. 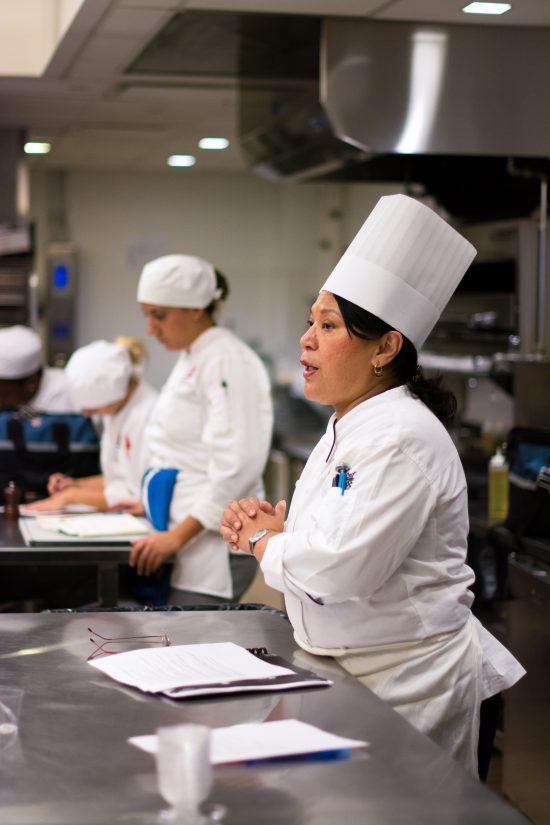 In 2008, when The Art Institute announced that it would discontinue its culinary program, Chef Lorrie immediately thought of ICE. Since 2009, she’s been part of the ICE teaching staff and has continued her own culinary education by traveling when not in the kitchen classrooms. Her most recent adventure has been her multiple teaching stints in St. Petersburg, Russia at Swissam, a top hospitality and culinary arts school that partnered with ICE in 2012.

Though she was hesitant to go at first, Chef Lorrie quickly fell in love with St. Petersburg. “The food culture is extremely advanced. That’s why Swissam was opened. Before it opened, Russia had new wealth and great chefs like Alain Ducasse and Jaime Oliver were going there. But they still had communist-style hospitality schools. The owner decided to establish the best culinary and hospitality school he could.” Chef Lorrie has enjoyed being one of the ambassadors of the ICE curriculum, all while taking in Russian art and culture.

From sampling the spices in the souks of Morocco to exploring the best parrillas in Argentina, Chef Lorrie has had her fair share of culinary voyages recently. For this lover of international cuisines and passionate teacher, ICE is the perfect place to call her permanent home.

Want to get in the kitchen classroom with Chef Lorrie? Click here to receive more information on ICE's career programs.