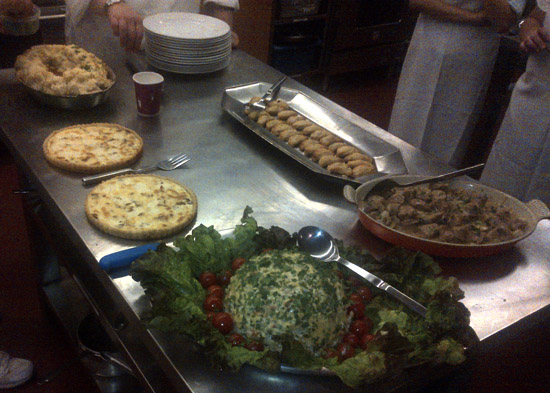 Chef Dan Stone’s “French Country Kitchen” class is every bit as enchanting and delicious as it sounds. I went into this class hoping that my nine years of French language studies might somehow offset my lack of culinary skills – however, Chef Dan would quickly ease any fears or doubts I had about my ability to cook a French dish. His expertise, patience, and calm demeanor eliminated everyone’s concerns about executing tricky classical French recipes – he supplemented his focus on technique with demos to get everyone cooking (chopping/sautéing/baking) in the right direction.

First up was a simple demo: How to correctly measure flour.  Chef Dan explained that one perfect cup of flour equals 4.25 ounces, but this is contingent on the methodology used to measure the flour. For instance, by sticking a dry measuring cup into a bag of flour and scooping (as I always have), you inadvertently pack the flour into the cup. Instead, Chef Dan recommends using a spoon to scoop flour into the measuring cup and then scraping any excess off the top with a knife. This is to help ensure the accuracy of measuring and the tastiness of recipes – in my case, this technique enabled the pastry shell of my quiche Lorraine to be light, flaky and not oversaturated with flour. Voila!

Chef Dan then provided a brief historical overview about the use of potatoes in French cuisine; he explained that for quite some years after Colombus and his crew brought tomatoes and potatoes to Europe, people thought they were poisonous and refused to eat them. In France, this was until an army pharmacist Antoine-Augustin Parmentier was captured by Prussians and forced to eat potatoes. During this time he came to recognize all the high-calorie nutrients the vegetable provided and when he returned to France he focused on introducing the vegetable as a viable source of food instead of just mere hog feed.

In 1772, the Paris Faculty of Medicine declared potatoes edible, and Parmentier was credited with help making this happen. My Aunt Julie participated in the class with me, and we volunteered to tackle the quiche and dessert, while the other half of our group chopped, chopped and chopped their way to an incredible French country veggie soup. The task of creating a perfect quiche Lorraine involved an incredible amount of patience and technique – the pastry shell alone was very intricate and required careful execution.

Lucky for me, my Aunt has a more extensive cooking background (and all the patience necessary to prepare such a dish!) One of the most interesting steps to me was the “frissage,” an old technique wherein you take the palm of your hand and quickly spread out small sections of the dough to give it a light, flaky texture. It is very important not to overwork the dough because then it will lose its light flakiness. It seems so simple and insignificant, but this step really is critical in crafting a scrumptious quiche as it spreads the chunks of butter into thin sheets within the dough, evenly distributing for a light flaky crisp. I may be a biased critic, but my favorite dishes were absolutely the soupe au pistou and the quiche Lorraine – the soup was so fresh and tasty; despite the fact that it used only water as a base and had minimal salt. Instead, spices like cumin and cayenne were used, and lots of fresh veggies to infuse it with flavor. On top was a freshly baked crouton and a dollop of fresh pistou – parfait! But truly, all the dishes were fantastic.

French Country Cooking was truly a delectable blast to the past – after all the hard work that goes into every scrumptious dish, it’s no wonder Chef Dan said, “If I was given the opportunity to choose my last dinner, it would absolutely be French.” Bon appétit and merci Chef Dan – wonderful class and wonderful food!