This winter, I gave my brother John—a dedicated home chef—a gift certificate to the Institute of Culinary Education for his birthday. After scouring the numerous offerings in The Main Course catalog, he decided upon a course entitled, “Essentials of the Mediterranean.” (Note: Bonding over cooking together at ICE will win you major points with siblings and family members. I highly recommend it!). 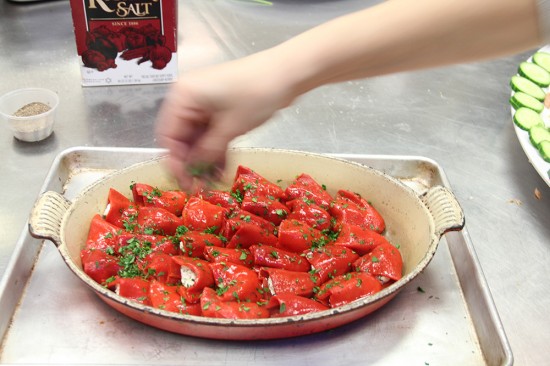 John and I attended the evening class together on a particularly chilly Monday night, eager for a culinary escape to warmer climes. The menu for the night was inspired by dishes commonly found in Southern France, Eastern Spain, Italy, and Greece, all of which border the Mediterranean Sea. The dishes included: Herb-and-Cheese-Stuffed Piquillo Peppers; Yemistes (baked rice-stuffed tomatoes and peppers); Salade Niçoise; Moussaka; Ratatouille; Seafood Paella; Grilled Whole Fish with Capers, Olives, and Tomatoes; Grilled Vegetables in Romesco Sauce; and Greek Yogurt Panna Cotta with Dried Apricots and Honey.

Our instructor—Chef Daniel Rosati—began the night by asking us what first comes to mind when we think of “Mediterranean cuisine.” We all responded with similar answers—olives, olive oil, tomatoes, feta, peppers, figs, seafood, etc. Chef Daniel said that our ideas were spot on, but that we shouldn’t view Mediterranean cuisine as a culinary bubble. He gave us a brief overview of ingredients commonly used in Mediterranean cooking—including peppers, tomatoes, potatoes and numerous spices—that are not native to the region, but rather, imports from the New World. The bottom line: even some things we think of as essential components of Greek, Italian, French and Spanish cuisine are relatively new additions to the Mediterranean repertoire.

After our quick history lesson, it was time to get cooking. John and I started with the Greek Yogurt Panna Cotta. Both of us have enjoyed this dessert numerous times in restaurants before, but have never made it at home. We had both assumed it would be labor intensive, but actuality, it’s an incredibly simple dish to make and the end result is absolutely stunning and delicious. Further, making it with Greek yogurt added an extra tang that everyone enjoyed. As a topping, we stewed apricots in some white wine and honey, which complemented the yogurt perfectly. 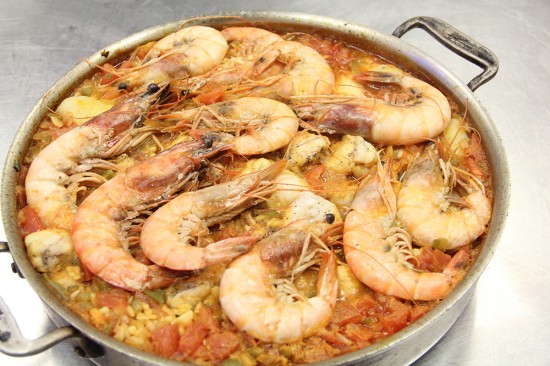 Next, John and I tackled the ratatouille—a personal favorite of mine. While it requires some extensive slicing and dicing of eggplant, onions, peppers and tomatoes, it is almost fool-proof to make. You just slice up your ingredients, place them in a large oven-proof pot, add olive oil, garlic and seasoning, cover with tin foil, then pop the dish in the oven. Then—voilà!—you are a mere forty-five minutes away from a warm, delicious plate of ratatouille. Leftovers are equally delicious eaten cold or reheated the next day over bread, scrambled eggs or fresh pasta—the options are endless! A brief disclaimer though: you and your sibling may disagree on the proper size to cut the vegetables. If this occurs, you should always assume that your sister is right. 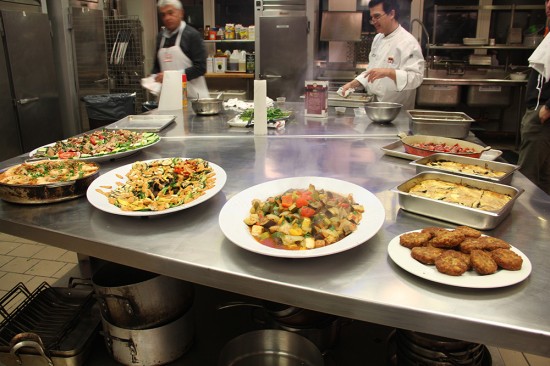 While my brother and I were busy working on our dishes, our fellow students were creating other culinary masterpieces. The herb-and-Cheese-stuffed piquillo peppers turned out stunningly. The deep red of the peppers, the creamy white goat cheese filling, and a smattering of fresh green herbs gave the entire dish a festive feel—perfect to serve as a holiday appetizer!

The grilled whole fish with capers, olives, and tomatoes was perhaps the most impressive dish of the evening. The fish we used a particularly beautiful red snapper. We left the fish whole, slicing a small opening in its side to slide in lemon slices and herbs, and then roasted the entire thing for around thirty minutes. The end result was perfectly flaky, drizzled with our caper, olive, lemon and tomato vinaigrette. I can honestly say it was some of the most tender fish I’ve ever had and again—surprisingly easy to make! I plan to make it the next time I’m aiming to impress a crowd. 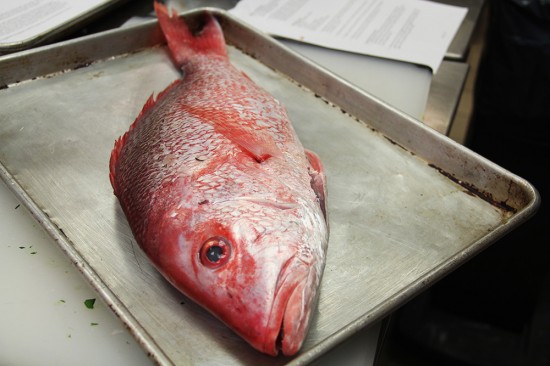 Upon completing all of the menu’s dishes, we sat down to an incredible meal. I must say—we were all rather impressed with ourselves; who knew we were capable of creating such culinary beauty? Clearly, expanding your culinary repertoire with a class at ICE comes with a hefty ego boost (not to mention delicious leftovers for days!). My brother and I both scooped an extra serving of inflated ego into our to-go containers before heading into the cold night, warmed to the core by our hearty Mediterranean meal at ICE.