Decadent Vegan Breakfast with Adam Sobel of the Cinnamon Snail

It was exactly one year ago, this month, that I made the decision to start consuming a plant-based vegan diet. Eating vegan is challenging in today’s culture, but not impossible. Usually all I have to say is “hold the cheese” when ordering at restaurants, but breakfast foods are a different story. I remember the day when my dad took me our favorite diner for breakfast and I realized the only thing vegan I could order was black coffee and hash browns—that is, if they weren’t cooked in butter. 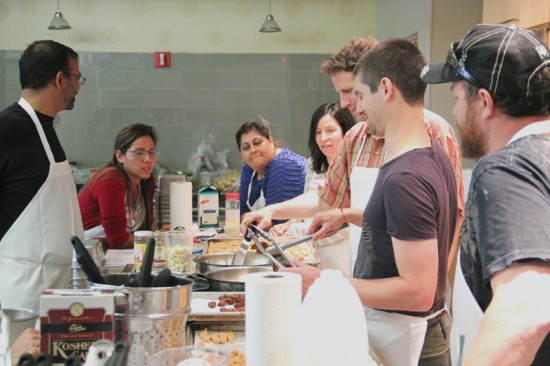 Because most traditional breakfast foods like pancakes, parfaits and pastries consist of animal products, I find eating a gourmet vegan breakfast to be the most challenging. So I was thrilled to be a part of Adam Sobel’s “Decadent Vegan Breakfast” recreational cooking class here at ICE. Adam is the founder of the award-winning Cinnamon Snail truck, a restaurant on wheels that parks around Manhattan and serves gourmet treats like crème brûlée donuts and fresh plum pancakes. Needless to say, breakfast is not a problem for Adam. His decadent breakfast menu consisted of:

In the class we learned how to use nutrient dense ingredients like coconut oil, whole grain mustard and even dandelion greens, which Adam said can be picked straight from some backyards! He was passionate about every ingredient we used and took the time to explain both their health benefits and how they are used for his own Cinnamon Snail creations.

When it comes to teaching, Adam is quirky, easy going and truly happy to be sharing his experience with clean vegan cooking. His goal is to use “not crazy” ingredients, as he puts it, that our bodies can easily recognize and digest properly. Vegan or not, the dishes we prepared can be enjoyed by anyone who appreciates the taste and nutritional value of whole foods. In fact, I am willing to bet that if a stranger off the street sat down to eat with us, they would never have known the food didn’t contain animal products—which is the whole point!

My favorite recipe was the Maple Mustard Breakfast Seitan Strips, made of seasoned vegetables combined with vital wheat gluten, fried (or baked) to a crispy golden brown and smothered in a bittersweet sticky glaze. It sounded scary at first, but not after I learned that every ingredient can be found in nearly every household kitchen. Better yet, every ingredient is derived from plants! Everyone had fun forming the doughy mixture into strips and taking turns dropping them in the skillet. 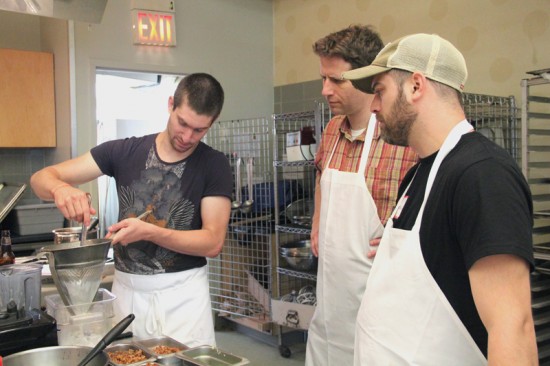 The Vanilla Sesame Milk was my second favorite recipe. I never understood how “milk” can be made from a nut or seed and I’ve always wanted to learn how to make it. All it took to create this creamy sweet calcium-rich beverage was soaking the seeds, blending them at high speeds with other ingredients, and then straining the liquid through a mesh strainer.

We even learned tips on what to do with the leftover pulp so nothing is wasted.   It is one thing to know how to cook vegan, but a completely different experience when you actually understand why certain ingredients work better in vegan cooking than others. Adam provided our class with valuable information and skills that I can integrate into my own lifestyle...and that I can use to fool my friends and family into eating a delicious vegan meal.

Give the Vanilla Sesame Milk a try at home. It's much easier than it sounds. Plus one cup of sesame milk has a whopping 1,400 mg. of calcium, a great alternative to cow’s milk, which is a mere 290 mg. It also makes a great base for ice creams and milk shakes.