Carving a Turkey on Live Television

One of the perks of my job is that, from time to time, I get to be on TV. On Monday I appeared on "Live From The Couch" on CBS WLNY offering my tips for cooking and carving the perfect Thanksgiving turkey. 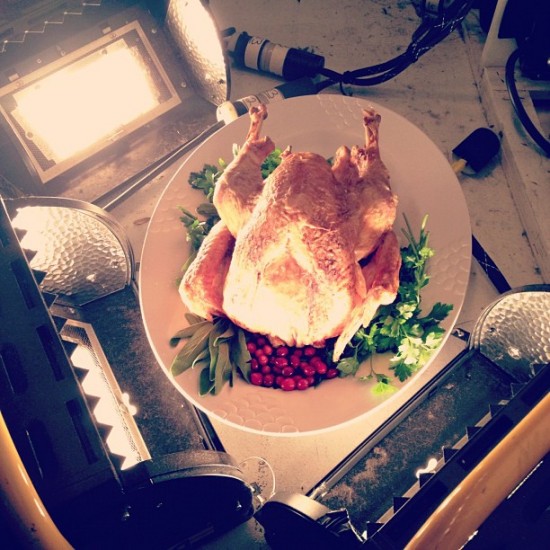 Video shoots are always fun and exciting, but live TV can be a little nerve-racking. If it’s a taped show, you usually get a "take two" (or three), but with news segments, you don't usually get that chance. Given the raised stakes, a few minutes of TV time means lots of preparation.

Here's a "behind the scenes" look at my experience at CBS on Monday morning: It was still dark out when I arrived at the studio, ingredients, and equipment in tow. The day before, I prepared two turkeys, cornbread stuffing, gravy and all the garnishes. Add in knives, platters, decorations and my chef's jacket – you’ve got a few suitcases worth of supplies to carry. As far as mental preparation, the producer and I reviewed all the questions in advance and rehearsed the segment over the phone. 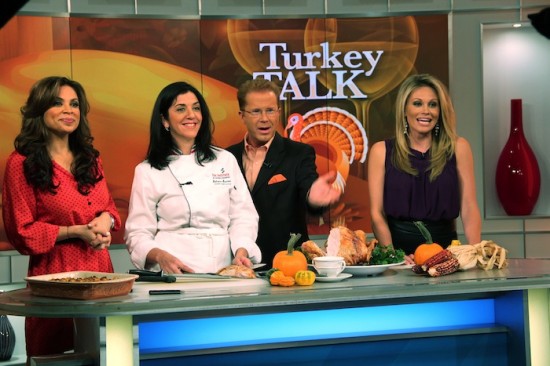 Upon arrival, I'm taken straight to hair and makeup and fitted with a microphone under my jacket. I unpack my food and spend a few minutes "styling" the bird, brushing it with butter and propping it up on a platter with some strategically placed onions and herbs. Chilled overnight after cooking, the turkey is still cold and the butter – which was intended to make it look shiny - starts to harden. Given the time constraints (and lack of an oven), I attempt to warm the skin with a few backstage footlights.

I briefly consider borrowing a hair dryer to speed up the process, but suddenly it's time for the segment. During a brief commercial break, I carry the turkey into the studio and am shown where to stand. I have just enough time to meet the hosts before the director starts counting down. We gather around food, and I remind myself to smile and look at the camera. A few quick questions, an exchange of campy jokes, and it's over. I carry the turkey backstage, where – still cold - the hungry crew devours it. I clean up, we exchange thanks, and I head back to ICE to teach my morning class. I have a full day ahead and won’t see the segment until later that evening (thank you DVR), but my students assure me there’s an Emmy in my future.