What’s It Like to Work in Bon Appétit’s Test Kitchen?

The Buenos Aires native has an infectious energy that she’s not shy about sharing; throwing her arms around a dozen ICE chefs and employees when she paid a recent visit to her alma mater. A slightly-less-than-compulsive organizer with an intuitive sense of the makings of a good recipe, she’s the perfect person to keep the fast-paced test kitchen at Bon Appétit on track. Gaby was kind enough to pop over from the offices of our Condé Nast neighbors to chat with us for an ICE blog interview. 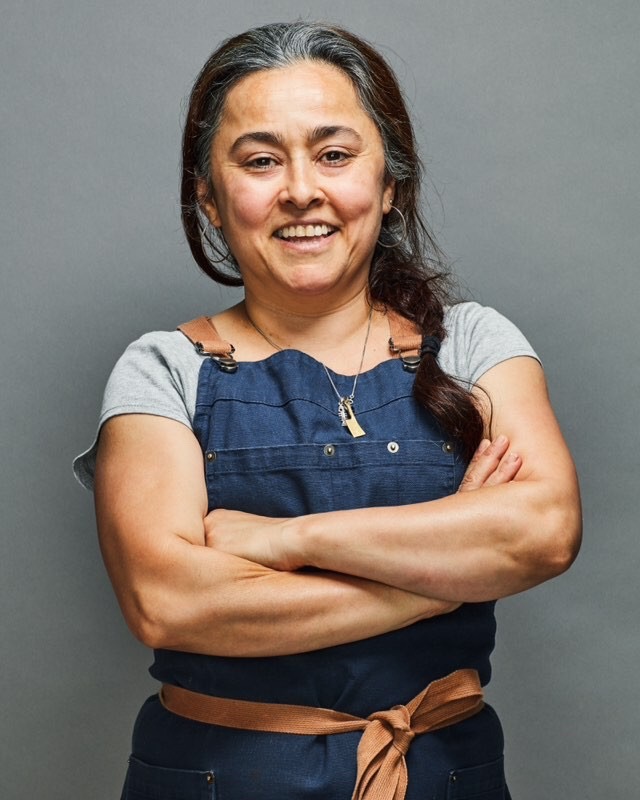 Tell me about landing your job in the Bon Appétit test kitchen.

I opened the weekly alumni email from ICE and there was a listing from Bon Appétit magazine for an assistant to the Test Kitchen Manager. I remember I sent Brad Leone, the Test Kitchen Manager and also a graduate from ICE, an email saying “I can’t wait to put my gloves on and do your dishes,” and they called me right away! And then I had an interview with him and Carla Lalli [Music], she’s the Food Director, also a former employee of ICE, and I started in June of last year. The first week there, I was like, these people are crazy, everyone is so happy, what do you guys eat for breakfast? I love it and I’m learning a lot.

Because it’s a test kitchen, you have to work with food editors and chefs and you get to test the recipes, or “cross test” — that’s how you say it. I’d like that to be my next step forward, a full-time cross tester. One day I told the team that I make empanadas to earn extra money and they begged me to try them. I brought my empanadas to work and they tasted them and someone said, “Why don’t we do an article on empanadas?” And I said, “Sure!” It was great because I got to see the whole recipe writing process — it’s super interesting. I was guided by Rick Martinez, a chef who’s been at Bon Appétit for a long time.

You have to go in baby steps, beginning with writing the recipe — they have a specific way of writing recipes so I’m learning that. But I love recipes. I sit down with recipe books and just read them. I can read a recipe and tell you if it’s going to work or not.

I feel like some people have an intuitive sense about making things really flavorful and adding the right kinds of flavors.

Exactly. Like the other day a food stylist for Epicurious was styling something and asked, “What do you think of strawberries and dill?” and I said, “Ehhh, maybe…” and then they put it together and we tasted and it was a total no. Working at the magazine you get to see the whole process, including when a recipe gets cut. They try to use recipes that everyone can understand. That’s where a cross-tester comes in — you look at a recipe that you’ve never seen before and you have to be able to reproduce the recipe and have the final product looking more or less like the picture. So there’s a lot of photography, a lot of tasting — I’m not kidding, I eat food all day. You have to!

There are definitely worse jobs. What advise would you give to our students who are interested in working in test kitchens?

I’d say go for it. Follow someone who you think has great, amazing recipes. You also need the culinary school experience. We have just one person working with us who didn’t go to culinary school but he worked in amazing restaurants. He’s only 26. But one in a million are just born with it. Even people who are writing about food went to culinary school. It has become such a big thing to be a chef. I think you need to have that base to set you apart.

Going to culinary school also tells you if you’re cut out for it or not. I know it’s a risk if it doesn’t work, but it’s not like you can just walk into a restaurant anymore and start working, unless you come from a restaurant family or you’re Daniel Boulud who started working at 13. This is not France in the 70s. Millions of people want to do it. But also don’t get stuck on one thing. Venture into other areas too. That’s what culinary school gives you — the credentials to venture into other things. You can end up being a manager or a prep cook. And maybe you don’t want to be a prep cook all your life, but you need that experience.

Was cooking a big part of your life, growing up?

Yes. My grandma was an amazing chef. Her mom and dad were from France, so they had a French culinary background. Interestingly enough, when I went to culinary school there was a whole module on French food and I thought, Hmm! My grandma cooked this but she called it something else! My dad’s side was into cooking, too — they were more Spanish-influenced and a teeny bit Italian.

Although in Argentina, everyone has some Italian in the family. We were really encouraged to try everything. We were in the kitchen always, making messes in my grandma’s pantry. I’ve always loved cooking and entertaining. When I was in college and didn’t have much work, I would make cakes and sandwiches. My dad is an artisan and he would sell silver and leather goods at outdoor markets. I didn’t have a stand to sell food, but I would sell it to the vendors.

Did you know you wanted to cook professionally?

Growing up I wanted to be a lawyer and a detective, but I thought it would be a long commitment so I went for journalism. I also have a degree in education. Teaching is my passion. I like to speak in front of people and tell them what to do (laughs). I’m also a born organizer. I’ll go to your desk and de-clutter the whole thing.

Maybe you can stop by after this interview.

Seriously, since I was eight years old, I would fold my mom’s clothes. I’m not OCD, but I like everything organized. That’s what I’m doing in the kitchen now. I reorganized the pantry, the baking cabinet. I’m the newest one but when they can’t find something, they say, Ask Gaby. I’ve also helped restaurants that are opening to set up — to make sure they have a good flow. So the magazine is giving me the freedom to use my skills.

What would be your dream job?

My dream is to have a little Volkswagen van, like a camper van — it has to be green of course, because that’s my color. I’d have my equipment in the van and go from school to school, teaching children how to cook. Like a “school on the go.” I’m also a Food Ambassador for the Food Revolution with Jamie Oliver — I love him. I’m the Jersey City Food Revolution Official Ambassador, besides all the other things I do.

Tell me about a day-in-the-life in your current role.

I’ll walk in at around 10:00am. We’ll receive the orders from Fresh Direct and we have to unload all of the boxes. We only have one walk-in. People get surprised because they think we’d have a big walk-in. But because our ingredients change every day, we keep a lot of things on-hand, but not in large quantities. At least three times a day I go shopping. I do a lot of shopping and I love it. I go to Whole Foods, Eataly and Kalustyan’s — it’s the biggest spice market, in the middle of what they call “Little India.” If I cross-test a recipe, I’ll usually do it before 1:00pm, because that’s the time when we get super busy. All the chefs have to present for the editors. The editors have a table in the middle of the kitchen. You have to set up for them.

Is that every day?

Every day. We also have a lot of demos, like companies sharing their products with us. Yesterday, we had a demo from the NBA — the National Bison Association — so we ate bison and learned a lot about it. There’s an educational side of it. Then the day is hectic between 3:00-5:00pm. If I’m helping Brad, I have to make sure all of the orders are in for the next day. My goal is to eventually become a cross-tester full-time. I joke around and say, “I’m the last pickle in the jar.” But Claire Saffitz, who’s another editor, tells me, Oh, Gaby, what would we do without you? I keep them on track. But we have fun. There’s a constant fun side to it.

Ready to launch a limitless career in the culinary world? Click here for more information on ICE’s career programs.